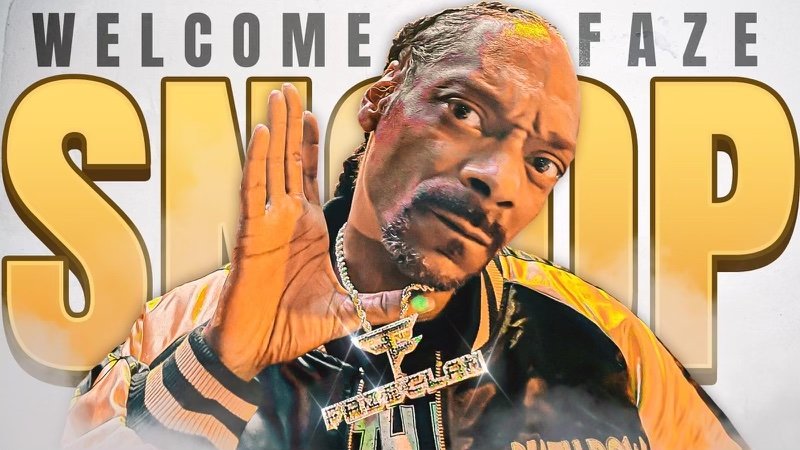 Snoop Dogg, the legendary hip hop star and main character of legalization efforts, has joined gaming juggernauts Faze Clan after his son talked him into it.

The 50-year-old father of four (whose real name is Calvin Cordozar Broadus, Jr.) was convinced to join up by son Cordell Broadus, who happens to be a creative consultant at an agency of some sort called Channel 21.

"As I've been watching what FaZe Clan has been building in the gaming space, I knew there was a natural connection with what my dad has been doing,'' said the younger Broadus. "When I look at the two brands, I was inspired by the synergy they could create so I brought them together in this partnership. I can't wait for the world to see what we are about to do."

This isn't Cordell's only venture into gaming, as late last year the talented college football hopeful swapped the gridiron for the blockchain in launching a 'play-to-earn' crypto game called Doge Dash. The 'Super Mario-inspired' mobile runner game asks players to "dash as fast as you can through all of the 10 levels whilst collecting coins along the way. Successful players who complete all levels will be rewarded with the collected coins." Those coins peaked at a value of $0.0018 on December 12 and are currently worth $0.00021 as of publish. Please note the extra zero before heading off to earn while you play.

Anyway we're getting way off track here. Based on extremely sound advice, Snoop Dogg is getting in on what the youth are interested in by joining Faze Clan as a member and also part of the board of directors as they aim to go public sometime this quarter through a SPAC deal with B. Riley Principal 150 Merger Corp. at a rumored billion-dollar valuation.

As a member, Snoop will be streaming games, like he did last year when he rage quit a game of NFL 21 that he was losing. We've all done it. And as a director he'll help "co-create content, participate in key business initiatives, and launch merchandise with the brand" like he did at the Battlefield 1 reveal party in 2016 with a very relaxed Zac Efron.

Faze, for their part, seem very excited to have the rap star on board – whose 19th studio album BODR (Bacc On Death Row) debuted at 104 in the Billboard 200 after he promoted it with his performance at this year's Super Bowl halftime show.

"The organic relationship between Faze and Snoop has been building for years now, so we are thrilled to officially welcome Faze Snoop to the family," said Faze Clan chief strategy officer Kai Henry. "As the original internet kid and first generation gamer, Snoop has always understood the cultural connection between music, lifestyle and gaming. Today, Snoop is a prominent voice in the emerging Web3 community and we have exciting plans to create together in the metaverse, driving new engagement opportunities for both of our fanbases."

Faze has been flirting around the edges of the Web3 community for years now, though its most high profile run-in ended with the organization kicking Faze Kay and suspending Jarvis, Nikan and Teeqo for their involvement in an altcoin called SaveTheKids which cratered in price immediately after launching with hastily deleted endorsements from all four.

Anyway, with Snoop's solid trendspotting advice from his son and Faze's storied history in gaming and Web3, we're looking forward to seeing what happens here.