Our Siofra River flames map will help you light all eight pillars in Elden Ring to battle the area's ghostly boss. 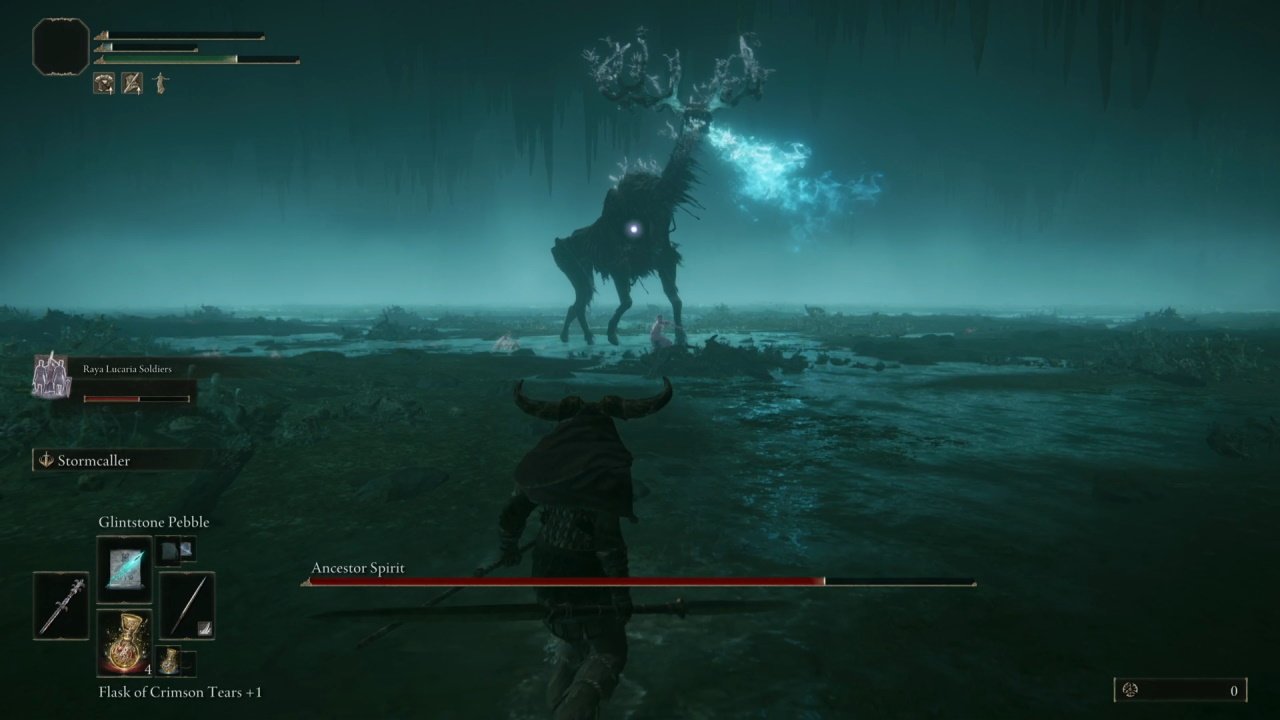 Learn the best places to get Smithing Stones early and how to unlock them at the Roundtable merchant.

The Elden Ring Ancestor Spirit boss fight lies at the end of the Siofra River area, after you’ve managed to light all eight torches. This mighty moose/deer foe will stalk you around a large arena, mixing magic attacks with headbutts. If you’re having trouble facing it, we’ll take you through how to beat the Ancestor Spirit in Elden Ring below by breaking down its moves and the best strategies.

After you light the fires and interact with the animal carcass at Hallowhorn Grounds, the Ancestor Spirit boss fight takes place in a colossal arena befitting the beast’s size. Don’t let that fool you into thinking this is a fight you should take on horseback. Stay on foot here.

The Ancestor Spirit has a very limited moveset, especially when you get up close under its legs, meaning it’s quite straightforward to chop it down for melee builds. Equally, there are plenty of openings for firing shots at range, too. Before we dive into the boss’ moves, here are some key tips.

We recommend taking Spirit Ashes that summon a group of allies into this fight. The Ancestor Spirit boss is a slow enemy which primarily focuses on a single target. Distracting it with a mob will give you plenty of time to land ranged attacks, heal yourself, or maneuver behind it. The Ancestor Spirit is not weak to poison, so avoid using the Spirit Jellyfish or any poison weapons.

Get behind it and up close as often as you can. The Elden Ring Ancestor Spirit only has one melee attack which hits behind it, and it’s an easy one to shield or dodge. Your key to break away is when it leaps into the air or lifts its head to start breathing fire.

The Ancestor Spirit hits hard, but its melee attacks are entirely physical. Equipping a 100% physical shield will block all damage, though you may be staggered. Still, that’s better than taking a hit to your health bar.

Here are the key Ancestor Spirit moves to watch out for and how to avoid them:

Swings and stomp: The Ancestor Spirit’s basic melee attack sees it swing its antlers low from side to side. It’ll perform up to three swings, and can and the third hit as a large stomp when it rears up on its hind legs. Each swing is extremely slow and well telegraphed. Dodge towards the boss for each hit, aiming to get underneath it. If it rears up, dodge towards its hind legs to avoid being hit. Avoid shielding the first swing, as this may stagger you for further hits.

Side leap and swing: If you’re at a distance from the spirit and sometimes when under it, the boss will bound to one side before swinging its head toward you. This can chain into regular swings and combos as noted above. Wait for the head to dip down into the ground to watch for the attack and dive forward, under the beast.

Charging headbutt: If you’re a short distance in front of the Ancestor Spirit, it may try to charge you. It lowers its horns down directly in front of it before rushing forward. Again, dodge directly towards the incoming hit after the antlers dip through the floor. You should be able to get an attack off in return.

Back kick: The Ancestor Spirit lifts its front legs slightly, then lands on them while kicking out behind it. When you’re behind or under the boss, watch its front legs while you attack. When they raise up, either block or prepare to dodge right as they slam down. It’s a well-telegraphed attack, and you can continue hitting straight afterwards.

Flying/Walking flames: The Ancestor Spirit raises up with fire in its mouth, then flies in an arc, spewing fire magic down at you in a line. This move is easy to avoid, even without dodging. If you’re close to the boss, you can walk sideways in the direction it’s in to step under and beyond where the flames land. Otherwise, walk backwards to avoid being hit. Let the boss come to you afterwards.

There’s also a walking variant of this that sees the boss spew fire down while walking in a line. If you see it’s mouth begin to glow, just back up and let it come to you afterwards. While it’s spewing fire is a great time to unleash any ranged magic or attacks you have.

Bouncing slam: Occasionally when separated by a great distance, the Ancestor spirit will leap into the air, bouncing two times before pausing at its apex and slamming down on top of you. Count the number of bounces, then wait until you see the body start to move down before you hit dodge. This is the hardest attack to dodge in the Ancestor Spirit’s arsenal.

Beat the Ancestor Spirit in Elden Ring, and you'll claim the Ancestral Follower Ashes along with a tidy sum of 13,000 Runes. It's a beefy reward for a fairly straightforward fight, making it well worth doing as soon as you can in Elden Ring.

That’s all we can teach you about how to beat the Ancestor Spirit boss fight in Elden Ring. It’s far from one of the toughest fights you’ll face, but it still pays to go in prepared. Be sure to visit our hub page for Elden Ring to find even more useful boss guides and tips.