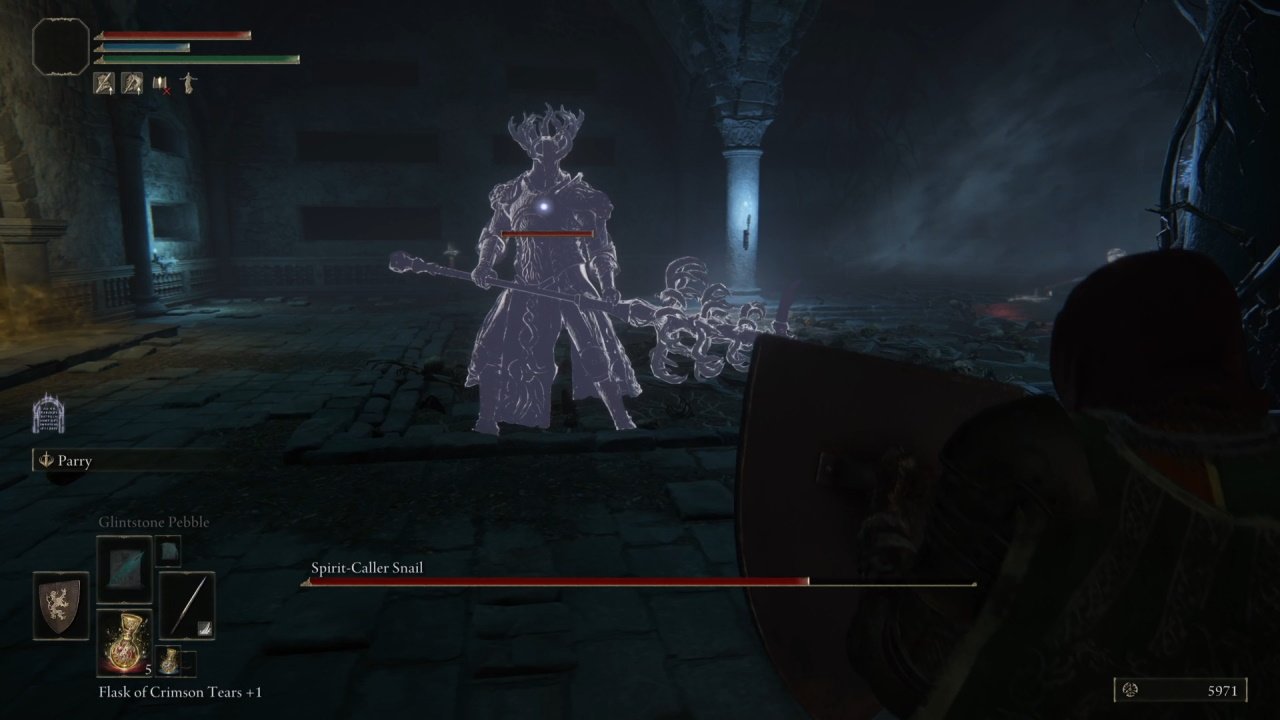 Our Vista Point: The Memorial Grove map will help you find the exact viewing spot needed in Horizon Forbidden West.

The Elden Ring Spirit Caller Snail boss sees you enter a chamber to face a large humanoid apparition wielding an enormous staff. He hits hard and, depending on your level, can kill you in just one or two strikes. The good news is that you don’t have to fight him.

The actual Spirit-Caller Snail boss is a feeble creature that hides invisible within the arena. Look for a glowing spot within the small area and strike it to reveal the snail. The first position is usually in the back right corner of the arena. Try not to get confused by the light from nearby candles.

Each time you hit the snail, it will teleport to another place within the arena. To beat the boss, you simply need to locate these glowing patches each time, attacking them to damage the Spirit-Called Snail boss.

The challenge is keeping your distance from the staff-wielding spirit as you do so. Fortunately, there are some simple tricks you can use. The spirit moves slowly, so you need to manipulate him around the arena to find time to strike. Repeat the process below:

You should have enough time to reach the Snail’s location and charge a heavy attack without being hit back. Using the Twinblade, we were able to unleash two heavy attacks before dodging to avoid the spirit at the max length of the room.

The snail won’t fight back, so you’ll be rewarded for your patience. Keep an eye on the aggressive spirit and don’t get greedy trying to pull off more hits. Take your time and you’ll beat the Spirit-Caller Snail in a single run.

A word of warning: The staff spirit does have an infrequent ranged attack which sees it unleash a blast of golden light. This deals large damage and may strike you in the back as you’re hitting the snail. He makes quite a bit of noise when casting, so listen carefully and turn to dodge if you hear him charging up.

Beat the Spirit-Caller Snail in Elden Ring and you'll earn the Glintstone Sorcerer Ashes and a tidy 3000 Runes. It's sadly one of the weakest Spirit Ashes out there, but you did get it from a snail, after all.

That’s all there is to know about how to beat Spirit-Caller Snail in Elden Ring. It’s far from the toughest of Elden Ring bosses, but one which can prove painful if you aren’t sure how to approach it. For more boss guides, visit our Elden Ring hub page which will teach you how to take down Leonine Misbegotten and more!