The Valorant 4.04 patch notes details major balancing changes and a rework of Icebox. 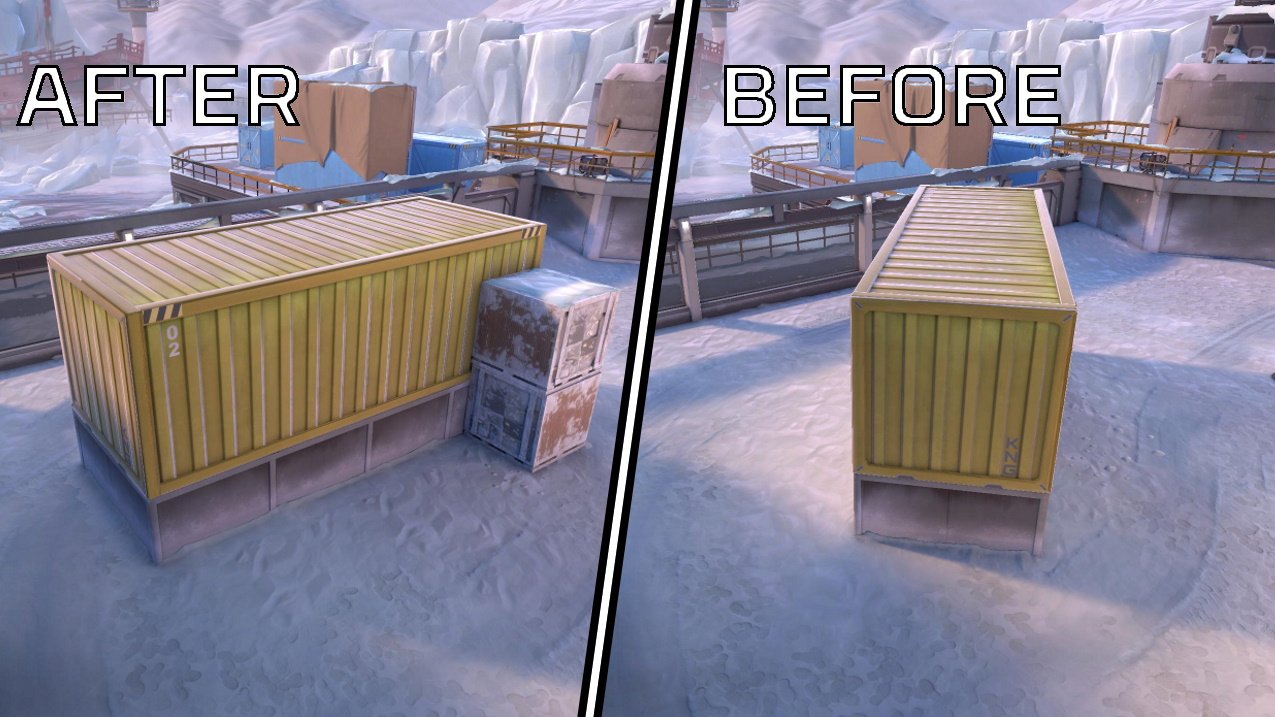 Episode 4 Act 2 has brought a wealth of updates to Agents, but it’s the Icebox changes in Valorant that could have a bigger impact for many players. The map has gone through a major rework, with the B-site drastically altered in an attempt to stop players from only ever planting and holding a single position. Thankfully, Riot has detailed the adjustments in full, meaning we can run you through all Icebox changes in Valorant Episode 4 Act 2 below.

B site has taken the brunt of the Icebox changes in Valorant Episode 4 Act 2, so that’s where we’ll start. First up is the lane entrance, sometimes called Green Lane. This has been opened up to make it more approachable for attackers.

The door shifted around to now exit into the first cubby, which is wider than before.

The lane itself has been widened to make it less of a chokepoint.

The second cubby has also been extended, making it more visible from site and yellow box.

Moving onto the site itself, significant efforts have been made to open up new plant locations for attackers. Riot wants to encourage teams to adopt different strategies when attacking the site, and also reduce the number of angles which need to be cleared.

The big yellow container has been rotated in line with the map edge wall, with a new set of boxed placed beside it.

The outer wall and crane have been shifted inward toward the plant zone, reducing the area smokes need to cover at back site.

The plant zone itself has been adjusted and expanded to increase planting options. The Spike can also now be planted on the bridge into Kitchen.

Finally the back B defender side area has had its building closed off to allow attackers a new aggressive site hold position.

Shifting up into Kitchen, the wall leading to the defender spawn exit has been adjusted to open the room up a little.

In mid, the view under tube is now protected from the danger angle on site by new crates, though the upper container is still a threat.

Defender’s mid ramp (Boiler) has been reduced in width and complexity, meaning smokes can now cover the full width of the gap.

Looking towards A, the doorway has been shortened so that the feet of anyone on top of screens can’t be shot from afar.

Moving on to the A site, defenders have been given more options. Back site now features a box to hide behind.

Attackers have been restricted, too, with the head peek on pipes removed.

Those are all the Valorant Icebox changes from patch 4.04 and Episode 4 Act 2. Be sure to read the full 4.04 patch notes to learn how Yoru and other Agents have been adjusted!