Learn how to equip and use Ashes of War in Elden Ring so you can unleash powerful special moves on your enemies. 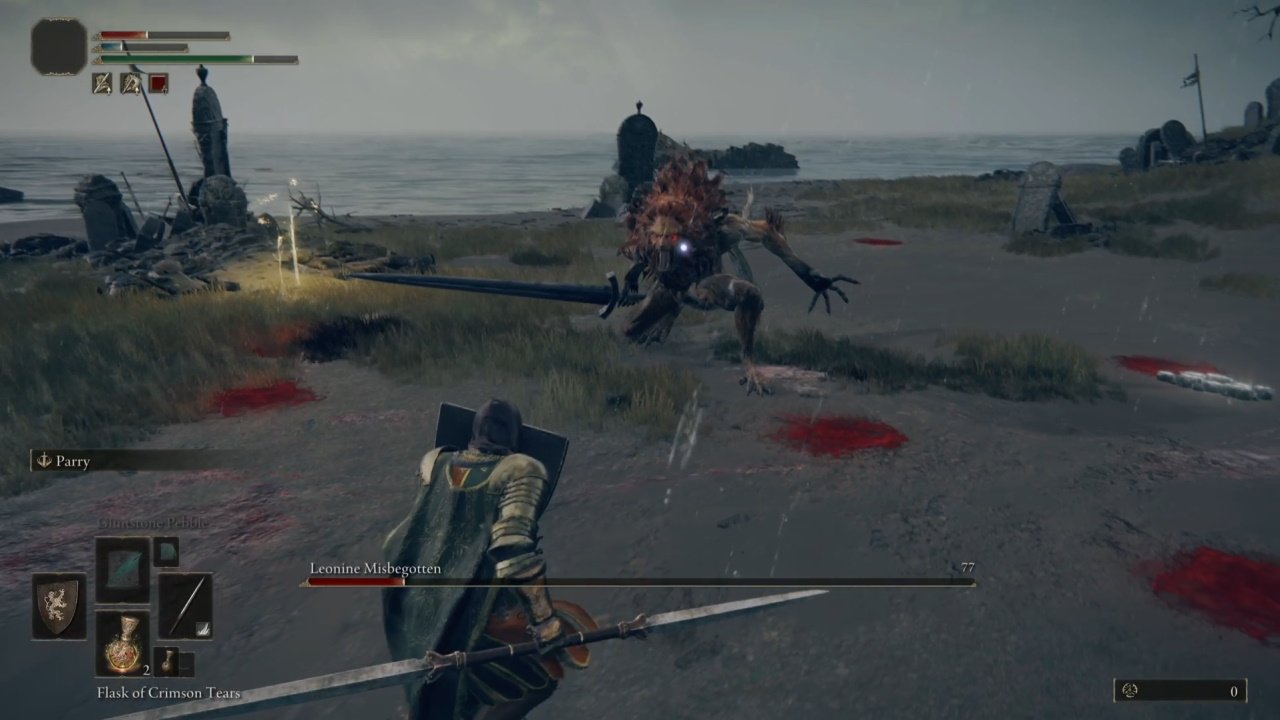 And it looks scarily good.

At the very end of Castle Morne lies the Elden Ring Leonine Misbegotten boss. Located at the southern tip of West Limgrave’s Weeping Peninsula, this Great Enemy can be engaged pretty early in your journeys through the game, but is also easy to miss until later. In this guide we’ll teach you how to beat Leonine Misbegotten in Elden Ring boss fight so you can send this aggressive beast enemy packing and score its mighty weapon as a reward.

How to beat Leonine Misbegotten in Elden Ring

The Leonine Misbegotten boss fight is through a gateway on a beach at the rear of Castle Morne. It’s only a short distance from a Site of Grace, and you can head straight there without fighting enemies simply by dropping off the wooden bridge.

As a beast enemy, Leonine Misbegotten is weak to fire, which means you should fill any cracked pots you own with Fire Pots and make use of any Fire Grease you have once you get to grips with the fight. They aren’t necessary to win the fight, but fire will help you deal increased damage with every hit.

Magic and shield users should be warned: Leonine Misbegotten moves quickly and hits very hard. Its attacks will likely break your guard in only a few hits, meaning it’s best to rely on rolling. Fortunately, its attacks are extremely telegraphed.

Our approach to success was this:

Leonine Misbegotten may hit hard, but it’s attacks follow very consistent patterns which you can learn to dodge with a little practice. Most strike sequences involve 1-4 swings before a large overhead or leaping strike. Wait to attack until after you dodge its final, overhead blow.

Here are the key moves to watch out for in the Leonine Misbegotten boss:

Slices into overhead strike: Loenine’s bread and butter combos. Be patient and dodge each one, only striking back after the final overhead swing.

Stomp & Spin: Easily one of the most dangerous moves in this boss’ arsenal. Leonine Misbegotten raises its front leg and slams it down before spinning twice. If you’re shielding, you’ll likely have your guard broken and take massive damage. If you see that leg raise up, roll away immediately.

Leaping slice: Leonine Misbegotten squats low, then leaps toward you with a sideways slice. This attack is often quickly followed by another attack, but you can interrupt with your own strikes if you deal enough damage. Dodge right as it raises its arm up in midair. An alternative sees Leonine slap its weapon down with two hands in the air, taking longer to strike.

Scuttle, slice, and slam: Leonine Misbegotten scuttles sideways, then unleashes a spinning slice before an overhead slam down. Dodge the first hit after it raises its arm up, then dodge again after it reaches the height of its leap for the slam. This is a great chance to heal or deal a heavy hit.

Patience will serve you well against Leonine Misbegotten. Apart from its stomp, most of its moves come out very slowly, giving you plenty of time to dodge if you keep a cool head. Save your Fire Grease until you’ve learned the baasic attack patterns, then melt its health bar with well times counter hits.

Once you’ve learned how to beat Leonine Misbegotten in Elden Ring, you’ll be able to claim the Grafted Blade Sword as a reward. Head over to our hub page to learn more tips and tricks for the game.