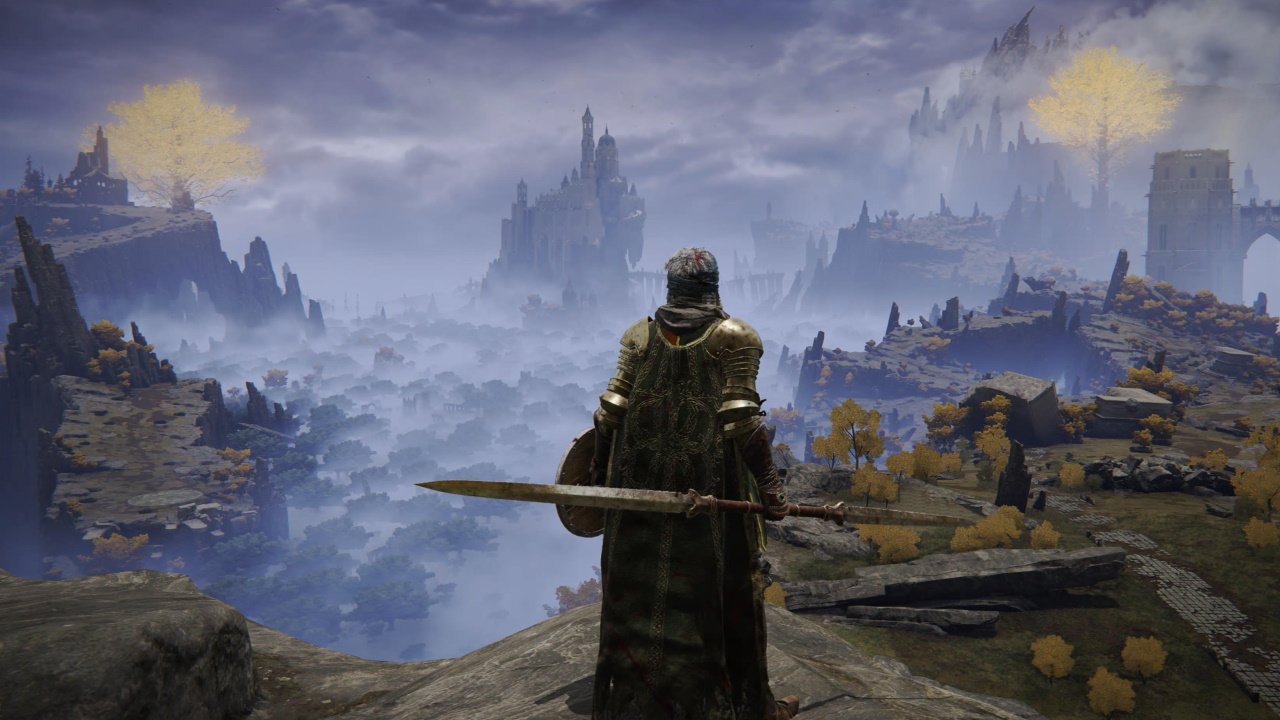 Elden Ring: Where to go first and key items to obtain

Our Elden Ring beginners tips will stop ignorance from tarnishing your Tarnished's early experience in the Lands Between.

Should I really be here? Expect to ask yourself that a lot in the first hours spent wandering Elden Ring’s open world. Soulsborne games aren’t exactly known for their generosity in direction, but Elden Ring takes this concept into whole new realms. Realms which are mostly filled with giant monstrosities trying to tear your face off. That terrifying world can leave many newcomers wondering where to go first in Elden Ring. Fortunately, we can help.

Where to go first in Elden Ring

The good news is that exploration is at the heart of the Elden Ring experience. But before you set off into the untamed and monster-crammed wilds, it’s worth visiting several spots to obtain some key items. As such, along with some general beginner's tips you can read here, we’ve put together a quick list of where to go first in Elden Ring and what you should be doing in the opening stages.

1. Head straight to the Church of Elleh

After resting at the first Site of Grace as you arrive out in the world, a golden path of light will point ahead in the direction of an old church building. Head there as soon as you can, avoiding the horse-riding Tree Sentinel on the way; he’s far above your starting level. Inside you’ll find a Site of Grace, a merchant called Kalé, and a weapon upgrade station.

Grab the Crafting Kit and any Cracked Pots you can afford from the merchant before you move on – a Torch can come in handy too – but remember this spot. You’ll need to return soon to secure a key item (covered below) and to upgrade your weapon once you have a few Smithing Stones.

2. Explore Gatefront Ruins for the first map and Whetstone Knife

The light from the church Site of Grace will point you towards another outside a gateway up to the castle. It’s north-northeast from the Church, and you can reach it by following the path through the small patch of woodland. We advise using stealth to take out the guards you find along the way. Backstabs should down them in one hit and avoid you facing multiple enemies at once.

Once you reach the Gatefront Ruins, look for the Site of Grace next to the large gateway. You can sneak left around the guard-filled camp to reach it and give you a close respawn point. From there, grab the first map segment from the base of the large pillar covered in glowing script along the road leading south from the gate. It’s in the middle of the guarded area, but you can sprint in and grab it if you’re not up for the fight.

Next, you also want to collect the Whetstone Knife, another key item. This is found in a chest down some stairs in the middle of the Gatefront Ruins. Use stealth and fight enemies one on one to avoid being mobbed by massive groups and you should be okay reaching it. Head down the stairs and grab the Whetstone so that you can equip Ashes of War when resting at a Site of Grace.

3. Return to the church after getting Torrent for the Spirit Calling Bell

Once you’ve rested at several Sites of Grace, you’ll be visited by an NPC called Melina. She’ll give you the Spectral Steed Whistle which allows you to summon your mount, Torrent. Once you have Torrent, return to the Church of Elleh.

Visit at night and you should find the area covered in fog, with a new NPC called Rennah sitting along the crumbling wall. Speak with her and confirm that you can summon Torrent. She’ll grant you the Spirit Calling Bell and Lone Wolf Ashes. The Spirit Calling Bell is a vital item that’ll make boss battles far, far easier by allowing you to summon a creature that fights on your side.

If Rennah isn’t there, head off to explore and find another Site of Grace. After you rest at it, fast travel back to the church again. In the worst case scenario where you think you’ve missed her entirely, you can purchase a Spirit Calling Bell from a vendor in Roundtable Hold – an NPC hub zone that Melina will warp you to before long.

3. Don’t just rush to the castle and Margit

After you rest at the Gatefront Ruins Site of Grace, the golden light will begin pointing you towards Stormveil Castle. The game’s first major boss, Margit the Fell Omen, is waiting for you there. But you shouldn’t hurry. Margit is a seriously tough challenge that probably shouldn’t be taken on until you’ve upgraded your weapon and leveled up several times. You may also want to obtain Margit’s Shackle by visiting the points detailed below.

Even after you beat Margit, Stormveil is a serious test. Instead, we’d recommend heading out to explore the Lands Between around Agheel Lake. There are loads of areas to uncover here that will better match your level and allow you to gather items as well as the runes needed to level up. You'll even find some Golden Seeds to increase the number of healing flasks you carry.

Dragon-Burnt Ruins: Crumbling ruins at the southern end of Lake Agheel. They’re filled with weaker enemies and a few underground holds. Be warned: the treasure chest in the north section is a trap that will teleport you to a high-level and challenging area. It can be fun to get caught and make your escape, but before you do, make sure you grab the Twinblade.

This weapon is hidden within a square section of wall in the bottom left of the ruins. You’ll need to use Torrent to double jump over the wall to access it. The Twinblade has a high Dex requirement but is a brilliant early choice for Dex/Strength builds.

Stormhill Shack:Head north from Gatefront Ruins and toward Stormveil Castle to find this unassuming shack on the right of the path. Don’t worry about the giant which drops down on the way here – you can sprint straight past him. Enter the shack to speak with Roderika. Keep talking with her and she’ll tell you that she’s interested in Chrysalids. You’ll likely find your first one within Stormveil, which you can bring to her here or in Roundtable Hold for a reward later on.

Warmaster’s Shack: While you’re up near Stormhill Shack, head east along the smaller pathway here. Follow it and you’ll eventually reach the Warmaster’s Shack in a woodland. The merchant within, berenahl, sells Ashes of War you can equip after picking up the Whetstone Knife. Further along the same path, just south of the Deathtouched Catacombs, is a small enemy encampment with a chest containing the Beast Crest Heater Shield. This offers 100% physical protection, which only the Confessor and Vagabond classes start with.

Murkwater Cave:Head north up the river from Lakle Agheel and you’ll get to enjoy a number of different encounters. First up is a fight with invader Bloody Finger Nerijus. Dodge him for a while and a second NPC will spawn in to help you, which should make the fight easier. Close to this location on the left side is Murkwater Cave. Rest here and then delve deeper to tackle Patches.

While this seems like a boss fight at first, pummel him a little and he’ll ask for mercy. Stop attacking and he’ll actually become an NPC merchant – one with extremely valuable wares. You can purchase Margit’s Shackle from him for 5,000 Runes. This can be used in the first major boss battle to stun Margit twice, making the fight a whole lot easier.

Even further up the path is another Murkwater dungeon, this time letting you take on the Grave Warden Duelist after sneaking past some traps. He’s aggressive, but with the Summoning Bell he shouldn’t prove too much of a challenge.

Demi-Human Forest Ruins:If you’re interested in sorcery but didn’t pick a class which starts with a staff, you can grab a good one early by bravely venturing south from Lake Agheel and across the Bridge of Sacrifice. There are loads of enemies on it, but with Torrent you can sprint right past them all. Keep heading straight south until you pass through a broken wall segment and see another obelisk with a Map Fragment at its base.

Snatch the map, then turn back and head up to where the path splits and you can travel northwest. Follow this path to eventually reach the Demi-Human Forest Ruins. Inside are a bunch of smaller, screeching enemies and one larger queen. She might seem intimidating, but she’s not actually that tough of a fight. Take down her minions first, then focus on her. Kill her to obtain the Demi-Human Queen’s Staff and the Crystal Burst Sorcery.

Waypoint Ruins:Once you have a staff, the first Sorcery teacher in Elden Ring can be found at Waypoint Ruins, directly east from Lake Agheeland just over the border from the East Limgrave map. There are loads of poison-spewing plants inside, including one massive one. You can fight, but you also dash past them to reach some stairs underground.

You’ll need to beat the Mad Pumpkin Head boss here, who’ll swing at you repeatedly with a flail or bash his armored head into the ground. Make use of a Spirit summon here to distract him and attack from behind. Once beaten, you can rest at a Site of Grace and head through the door to find Sorceress Sellen. Become a student and she’ll sell you Sorceries, and will also accept scrolls you find to increase her wares.

Now that you’ve figured out where to go first in Elden Ring, you’re free to explore Limgrave further or head north to take on Margit and Stormveil Castle. Check out our beginner's tips to make sure you're mastering the game's early fundamentals, but beyond that, the Lands Between are yours to uncover.