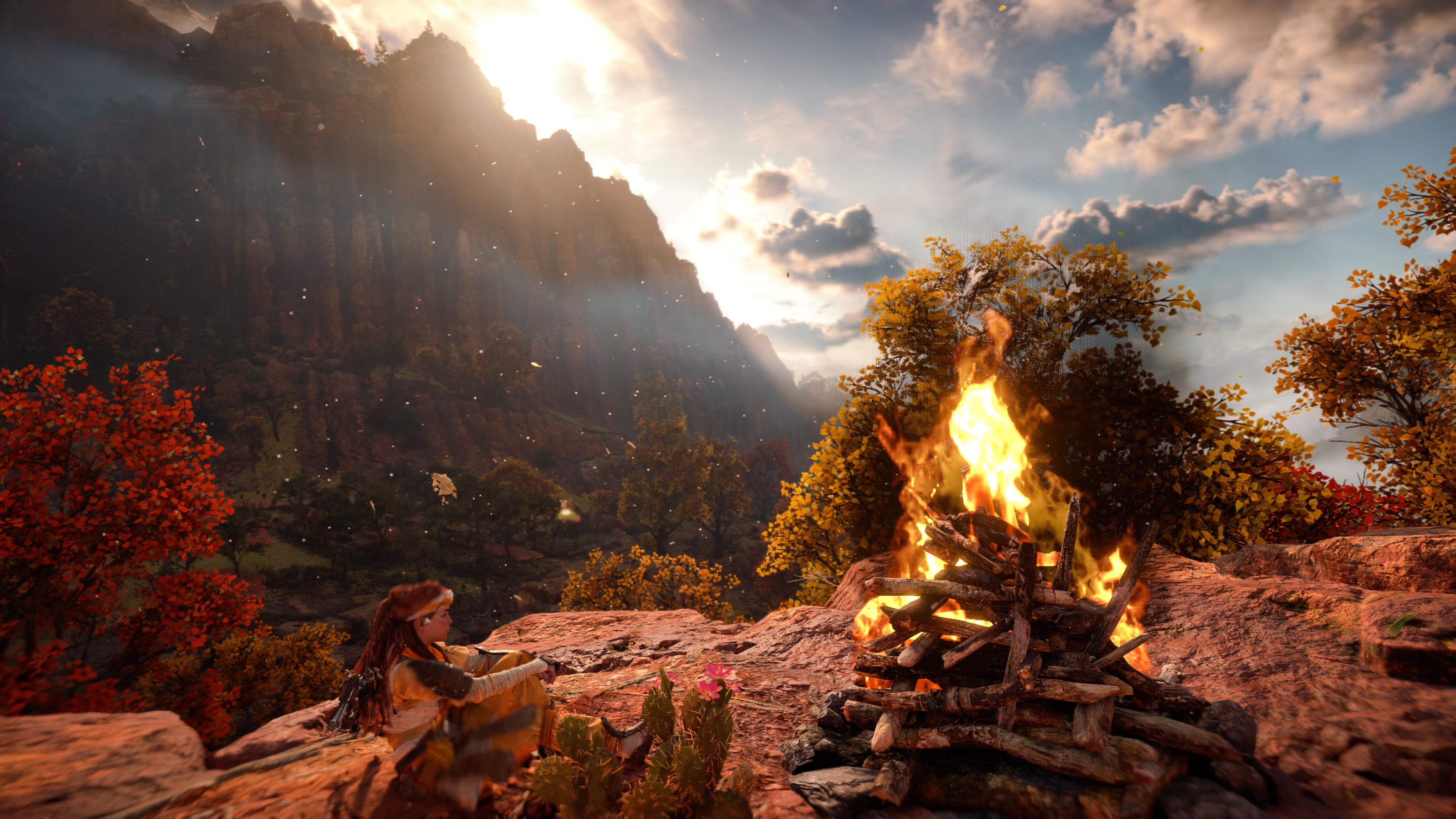 Horizon Forbidden West tips and tricks all beginners should know

Aloy isn’t one to waste time fumbling with the basics, and neither should you. Before you head into the vast expanse of the Forbidden West, learn from those of us who’ve already been there. We’ve rounded up 10 key Horizon Forbidden West beginners tips and tricks that any westward wanderer planning to save the world should know.

1. Don’t rush out of The Daunt

After a brief stint of linear action, Horizon Forbidden West will let you loose into a region called The Daunt. This effectively acts as a miniature open world segment, letting you get to grips with the game before you enter the Forbidden West proper. While it’s tempting to zip through this sector as quickly as possible, we’d really advise exploring it thoroughly.

Many of The Daunt’s side missions will set up key mechanics and systems you’ll encounter throughout the rest of the game, or even unlock powerful new types of weapons. You’ll also be rewarded with a wealth of skill points that’ll make Aloy a far more formidable hunter once you do head through the gates of Barren Light.

2. But once you do, stick to the story

Yes, we know we just said to take it slow at first. But once you are out and into the Forbidden Wilds, it’s definitely worth sticking with the story for a little while. By all means take a detour to scale the first Tallneck, but after that, you should wrap up the first few Main Quests as quickly as possible.

Doing so will help Aloy to gear up with some key tools like the Igniter which is required to complete a wealth of activities out in the wild. You’ll also have the chance to unlock the Arena, which is the path to some of the game's best armor sets. Once you’ve unlocked these, then you can feel free to start mopping up that map as you lose yourself in the wild west.

Combat in Horizon Zero Dawn already centered around parts, but Forbidden West doubles down on the premise. You’ll deal minimal damage when attacking machines outright, while severing parts will knock off huge chunks of their health. Removing key components like power sources will also restrict the types of attacks that more dangerous foes can unleash.

Thanks to a wider range of weapons and outfits, you’ll also need to scavenge a huge number of components for upgrades. Thankfully, Forbidden West makes hunting these components a lot easier by allowing you to tag specific parts on a machine when you scan them with a focus. Simply tap Triangle when viewing a part to highlight it in purple for easy targeting. Most parts are destroyed when a machine is killed, meaning you need to knock them off before you finish the fight.

Some weapons like the Sharpshot bow will outright destroy parts they hit, while others offer massive Tear damage to remove them without hurting the machine. Check your tools carefully before you start a lengthy session of tracking and gathering.

Melee combat has has come on leaps and bounds – often quite literally – making it a key Horizon Forbidden west beginners tip to practice your combat combos. Aloy won’t start with any fancy moves, but by investing in her Warrior tree you’ll unlock lengthy combos, resonator blasts, and the ability to leap off enemies mid-fight.

These new moves are practically vital in some boss encounters, and they’ll serve you well when tackling agile machines, too. Use Melee Pits like the one in Chainscrape to learn the basics of each combo you unlock. That way you’ll be ready to unleash them on enemies in the wild. Moves like Jump Strike are especially useful for getting you out of a pinch when surrounded, so grab that as soon as you can.

5. You don’t need to upgrade everything (but the first level is always cheap)

Horizon Forbidden West includes far, far more weapons and outfits than Zero Dawn, and each one comes with several upgrade levels to unlock. Unless you’re aiming for 100% completion, though, you don’t need to invest in upgrading every single weapon and outfit you unlock. Find out which ones fit your playstyle and focus on them first.

That said, the first upgrade tier for each item is almost always extremely cheap, costing just a few Metal Scraps and easily recovered items. Whenever you unlock something new, it’s worth stopping by a workbench to make it that little bit more powerful before you test it out.

Aloy’s mind might be preoccupied with mighty machines and world-ending AIs, but you should set her sights on something smaller to start. Hunting wildlife is the only way to get the resources required for Pouch upgrades. These will boost your stock of arrows, traps, potions and more.

Several of the early Pouch resources come from animals like raccoons which are located in or close to The Daunt. Skip over them and you may find yourself with minimal supplies for much of Aloy’s adventures. It may feel cruel, but you should use your focus to tag nearby animals including birds, boars, squirrels, and raccoons to get the resources you need as quickly as possible.

7. Treat your ears to some high-quality HyperX audio

The vast world of the Forbidden West is an outrageously one – and well worth listening to! Whether it's wildlife rustling through the undergrowth of the telltale whine of a machine in the distance, the land is packed with sumptuous audio effects to let you know what's wandering the West nearby. To make the most of the 3D audio available on the PS5, you'll definitely want to grab a quality headset like HyperX's Cloud Stinger Core Wireless. Its black, white, and blue color pattern will pair perfectly with the PS5 itself, and the enhanced bass of the 40mm drivers will have you feeling like that Tremortusk is thumping its way through your living room. Check out the HyperX Cloud Stinger Core here, or HyperX's full range of gaming headsets here.

A quick note for accessibility: If Horizon's audio cues are causing problems for your eardrums or real-life focus, the game even includes a tinnitus-friendly audio option in the Settings menu. Be sure to check it out if a world of machine noises is proving overwhelming.

One trick Forbidden West doesn’t tell you is that there’s a lot of loot hiding in places you might not expect. You’ll find barrels sitting all over Aloy’s land, and smashing them will sometimes offer up small troves of loot for you to gather. It’s rarely a huge reward, but it is pretty cathartic to bash some barrels every now and again.

You can also crack open some bit of scenery like rusted car bonnets to find hidden stashes of goods. Keep an eye on your focus for these interactable spots, or watch out for the “R2 Pry” prompt when wandering through ruins.

You can and should invest in all of Horizon Forbidden West’s six skill trees. But if you’re wondering where to start, the stealthy Infiltrator tree will offer a more immediate boost than most. The early Infiltrator skills will increase your stealth strike damage, grant increased damage and tear damage when hiding, and even heal you when you perform a stealth kill.

The first Valor Surge on the tree, Stealth Stalker, will also let you turn semi-invisible, making sneaking past or up to machines much easier. As noted previously, it takes time to get to grips with the new abilities and combos offered by the Warrior tree and other paths. But while you’re practicing those, the Infiltrator tree will see you through the early battles comfortably.

And finally, you'll notice that Aloy talks to herself an awful lot as you explore, making it easy to gloss over her repeated comments. Take note, however, as she’s also one of the greatest sources of Horizon Forbidden West tips. Aloy will tell you the elements machines are weak or strong against when scanned with the Focus, comment when humans foes give up searching for her as you hide in their camps, and offer advice on so much more. She’ll also let you know when you can’t yet complete a task by muttering about the need for “special equipment.” Even if you’re just a beginner, Aloy is a seriously skilled huntress – you’d do well to listen to her advice!