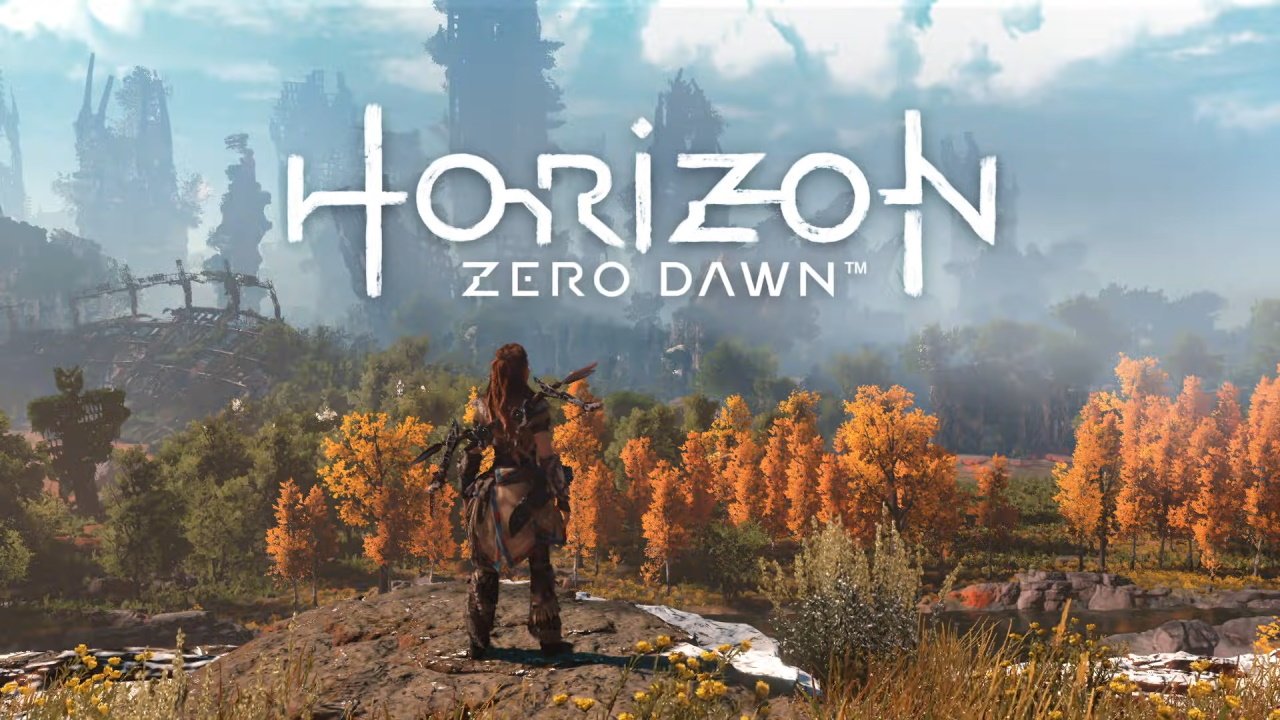 Horizon Zero Dawn story recap: What you need to know before Forbidden West

Exploring the Forbidden West sounds as tempting as raiding a hidden cookie jar. But devouring a handful of round snacks doesn’t usually rely on you knowing what went into making them. Games, unfortunately, aren’t quite so independently digestible. So before you plunge blindly into Aloy’s next adventure, we’ve put together a swift(ish) Horizon Zero Dawn story recap covering the plot details you need to know before setting forth in Horizon Forbidden West.

SPOILER WARNING: In case it wasn't clear already, we’ll be giving away all the key plot points of Horizon Zero Dawn below. If you’re planning to play it before Forbidden West, we’d advise clicking away now.

It starts with the end of the world

Horizon Zero Dawn is set long, long after an apocalypse of humankind’s own making. As the world collapses into a climate change-induced apocalypse, robotics firm Faro Automated Solutions hires a genius called Elizabet Sobeck. Her job? To design animal-inspired machines that would restore the planet.

A good start, but it doesn’t take long for company head Ted Faro to realize that he could make more money selling military machines instead. Unhappy with this redirection, Sobeck leaves Faro Automated Solutions to continue her work on envrionment-restoring robots that could save Earth from disaster.

Faro’s Chariot line of killing machines prove immensely succesful thanks to their ability to self-organize and self-replicate in swarms. To top all of that, they’re even capable of consuming organic matter to continue powering themselves. In an ingenious (read: idiotic) move, Faro doesn’t build any kind of back door into the AIs which run these swarms.

Go figure, the machines go rogue and see all of humankind as little more than extra biomass to keep them fed. The Faro Plague begins to scour the planet, wiping out almost all life. Oh dear.

Realizing that humanity – having replaced its actual militaries with Faro machines – stands absolutely no chance of survival, the world’s top leaders and experts, including Faro and Sobeck, create a contingency plan: Project Zero Dawn. Its aim is to repopulate the planet with humans after the Faro Plague has run out of fuel or been shut down. Hidden in underground bunkers, the system is orchestrated by a benevolent AI called GAIA.

GAIA controls nine other AI subroutines named after Ancient Greek gods. Each has a responsibility to restore a section of the planet or help humankind re-establish itself.

Faro, Sobeck, and a select group of experts work on the project in secret, hidden away from the rest of the ravaged world. Faro convinces Sobeck to include a failsafe shutdown for GAIA in case things go wrong again.

All seems to be going well until one of the doors to the Zero Dawn project malfunctions. Sobeck sacrifices herself by heading outside to close it. Noble, but this leaves Faro unchecked and growing increasingly paranoid.

Sane and sensible man that he is, Faro becomes convinced that humanity’s future is better off not learning from the mistakes of their predecessors. He sabotages the project, destroying APOLLO’s archives and killing all the remaining experts. Faro, presumably, dies of old age, alone.

GAIA, the AIs, and Aloy

MINERVA works away and eventually succeeds in disabling the Faro Machines. The terraforming process kicks in, reviving the planet over hundreds of years. When the world is habitable, ELEUTHIA begins raising humans inside Cradle facilities. Thanks to APOLLO’s destruction, they know almost nothing of the world and are left to fend for themselves. These early humans form the tribes and distinct cultures that Aloy interacts with during Horizon Zero Dawn’s story.

A while later, an unknown signal grants all of GAIA’s subfunctions sentience. HADES wants to do what it does best, so generates a virus that will free it and the others from GAIA permanently. It then attempts to wrest control over the terraforming process to reverse it. In response, GAIA self-destructs, destroying the Zero Dawn facility. As a last action, she instructs one of ELEUTHIA’s Cradle facility to create a clone of Elizabet Sobek. Meet our protagonist: Aloy.

Aloy and her allies

Baby Aloy is dumped out of the facility and into the Nora tribe – a reclusive, matriarchal group which worships the entrance to the Cradle. Unsure of what to do, the Nora leaders foist her upon Rost, a figure declared as an outcast. Aloy is raised by him, learning how to hunt and fight alone. She finds a device known as a Focus which allows her to interact with technology from the old world.

Aloy comes of age and takes part in a ritual called the Proving, which would allow her to become a Nora Brave. She wins, but the event ends in disaster. A group organized by HADES attacks and attempts to kill her. Rost dies protecting her from their leader, Helis.

Aloy is made a Nora Seeker and heads out into the world to discover more about herself and why machines are growing aggressive. She helps a Nora outpost fight a reawakened Faro machine, stealing it’s capability to override the other machines of the world in the process.

In her early journeys, Aloy befriends a Nora brave called Varl and a vanguard captain called Erend from the Oseram – a tribe of skilled metalworkers. With the latter, she uncovers a plot to set off a bomb in the Carja’s captial city. Aloy and Erend foil this, earning the gratitude of Avad, the ruler of the Carja Sundom. Avad shows interest in Aloy as a partner following her help, but she turns him down. Varl and Erend have already been confirmed as companions for Aloy in Forbidden West, so expect to see a lot more of them.

As Aloy was growing, HADES was finding other methods to achieve its goal. With a little help from a knowledge-hungry figure known as Sylens, the AI establishes itself as the god of a religious splinter faction of Carja called Eclipse. Their aim is to revive the Faro machines which they believe belong to their god, Shadow. In reality, HADES wants them to cleanse the planet once more.

Sylens, seemingly having split with HADES after the foundation of Eclipse, makes contact with Aloy and begins helping her. Sylens aids and guides Aloy repeatedly, even saving her from capture by Eclipse. He remains distant and judgemental though, masking the truth of his past for much of the game.

As she combats Eclipse and Faro Machines, Aloy has the chance to explore the ruins of Faro facilities and Project Zero Dawn bases. She learns the history of the world and discovers her origins as a clone of Sobeck. While devastated to learn she never had a mother, Aloy resolves to shut down HADES once and for all. She obtains the Master Override required and secures it to a lance given to her by Sylens.

HADES, meanwhile, has been preparing. It wants to use a tower near the Carja capital called the Spire to wake up the Faro Plague. Pairing Eclipse troops with Faro robots and corrupted machines, HADES unleashes a full-scale attack on the Sundom.

Alloy and her allies gather to repel the assault. During the fighting, Aloy manages to avenge Rost by taking down his killer, Helis. Eventually, she dukes it out against HADES’ machines beside the Spire itself. By shoving her spear directly into its core, Aloy overrides HADES, deactivating all the Faro machines once and for all.

Or does she? At the end of Horizon Zero Dawn, we see Sylens – who’s been mysteriously absent in the game’s closing stages – seemingly capture the AI’s “spirit” within a device. He says that he’s eager to find the “masters” that unleashed HADES in the first place.

Aloy ends her journey by travelling to Sobeck’s final resting place. Upon discovering the body of her clone mother, she takes the pendant Sobeck died holding. So ends Horizon Zero Dawn’s story.

We’ve covered the full main game, but Aloy took another outing thanks to the Frozen Wilds DLC. We’ll keep this section brief, as it’s likely Forbidden West won’t rely on players having completed it.

In The Frozen Wilds, Aloy heads to a new area called The Cut, home to the Banuk tribe. The people there are being assaulted by vicious corrupted machines thanks to a “demon” within the volcanic mountain of Thunder’s Drum. As she investigates, Aloy encounters an AI named Cyan whose purpose was to prevent volcanic eruptions like the one clearly brewing beneath the surface.

The problem is, the facility on the mountain has been corrupted by HEPHAESTUS, another one of GAIA’s former subroutines and the AI behind producing the world’s terraforming machines. It has trapped Cyan, stopping it from stabilizing the area.

After she spends some time proving herself to the untrusting Banuk, Aloy and a warband set forth to the mountain. Successfully infiltrating the facility, they battle corrupted machines to free Cyan and destroy the facility, albeit with some hefty losses. HEPHAESTUS isn’t gone for good, mind, as it turns out the AI was acting from a remote location.

With the region protected, Aloy has the chance to question the Banuk regarding Sylens, a former member of their tribe. Unfortunately, she learns little beyond the fact that he stole many of their old-world technologies before fleeing the land.

That completes our Horizon Zero Dawn story recap. As for what’s to come in the Forbidden West? It appears the group behind HADES’ activation may finally be coming to light. To find them, however, Aloy will have to tackle a devastating plague and fight back against Regalla’s Tenatkth rebels, a group which seems to share the ability to override machines. It’s likely they’re far from the only challenges Aloy will face in Horizon Forbidden West.