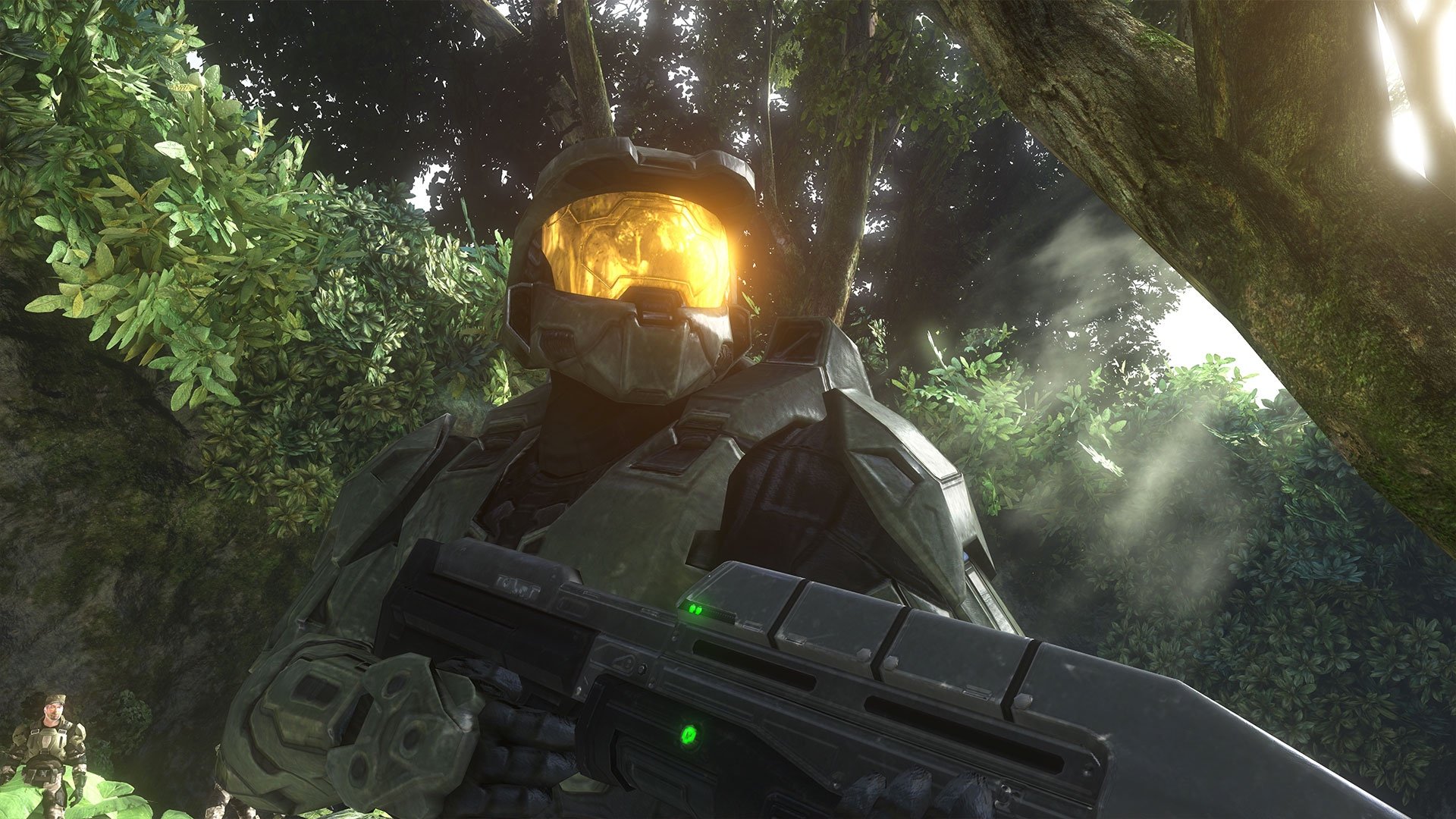 Super Mario Kart was 25 years old recently. We felt that one. The realization that a game we played obsessively as a kid is now old enough to have kids - or a glittering dynasty in Mario Kart's case - is a sobering thought. The news that Halo 3 is 10 years old doesn't feel that way. The shock here is that it is merely 10 years old. We barely had smartphones when Halo 3 came out. Obama in the White House still seemed far-fetched, let alone Trump. So returning to Halo 3, we half-expected to find a game that felt a lifetime removed.

Instead we found a game that still feels ahead of its time.

Were it so easy

It doesn't take long after touching down in Africa to remember why Halo 3 felt so stunning at the time. It's not the graphics so much as the scale. The messy textures and sharp-angled faces are jarring at first blush, but by the time you're shooting your way into a UNSC outpost to rescue Avery Johnson, you couldn't care less. You're locked into the fight around you, juggling as much human and Covenant weaponry as you can scavenge from the battlefield to fend off encroaching Brutes and Elites. Beyond your bubble of combat, dropships tussle in the air above the dam you're fighting on, flashing across a backdrop of jungle and mountain ranges and a typically evocative Bungie skybox.

One of the main reasons Destiny overcame its early teething troubles and content shortages to become the pre-eminent online shooter of this generation is that Bungie nails these moments. Chief's movement in the Halo series is immaculate - just the right combination of acceleration, top speed, moonjump physics and analogue control to make you feel nimble and powerful. Coupled with great weapons and enemies who are programmed to think for themselves rather than waiting for you to do things, it means every encounter feels tight and unpredictable, and it was as true at the start of Halo 3 as it was in Destiny's Vault of Glass. It almost doesn't matter where you go in Halo 3 - you could be fighting enemies in a textureless void full of boxes and it would still be challenging and fun.

After a slimline campaign in Halo 2, the third game went into narrative overdrive, following Chief, Arbiter and their allies on a journey to rid the universe of the High Prophet of Truth, who wanted to activate an ancient Forerunner artefact called the Ark and deliver us all to oblivion. Whether or not you dig Halo's particular brand of bareknuckle sci-fi and its po-faced sentimentality, this is a spectacular ride, recalling many of the best moments of the series and inventing new ones at a canter. The fact you can play through all of it in four-player co-op is kind of crazy in hindsight, but illustrative of how high Bungie was aiming.

Where did he get a hammer?

Returning to the campaign is like staring back at a long lost blueprint of what we now hold dear. It's easy to draw a line from things like Halo 3's skulls and bubble shields to the elemental damage modifiers and subclasses we tackle in Destiny. And the rest of the package was also rather presciently assembled, from the Forge level editor and incredible Theatre mode to competitive multiplayer, but it's the latter we all probably remember most fondly. Halo 2 was when Xbox Live really became a thing, and Halo 3 was when Xbox 360 really reminded us why Live was a thing. If you weren't around at the time, you'll never get to know the thrill of loading into multiplayer and seeing Planet Earth lit up with the lights of several million other players eagerly fighting their way across Last Resort and The Pit.

That visual representation of the community you were part of was a watershed moment for this kind of game, and arguably foreshadowed Destiny better than almost anything else, and the way the game interacted with Bungie.net was like a postcard from the future. The level of statistical detail you could dig into through the companion site made rival games look simplistic and ephemeral, which feels apt in hindsight given this was period when Call of Duty transformed into annualised Modern Warfare.

The superb player movement, elegant map design and a simple arsenal meant Halo 3 felt accessible enough while still offering plenty of subtlety for those who put in the long yards. Roles became natural extensions of your play style, whether you liked getting up close and finishing people off with melee attacks after a shotgun blast or assault rifle clip, or drifting to the margins with a sniper rifle and waiting for players to bound predictably into your crosshairs. Level designers were getting smarter by this stage, creating opportunities and breaking sight lines in inventive ways. Call of Duty took that and ran with it, while Bungie spent the next few years breaking free from Microsoft to start new adventures, but for a while Halo 3 multiplayer was a perfect moment in time.

Wake me when you need me

Halo 3 is certainly a game with a legacy, as well as the arguable pinnacle of a series that still had some interesting installments (ODST and Reach are both well worth revisiting for different reasons) but never again managed to feel like quite so much of an event. Microsoft kept making Halo games, and they're decent enough, but Halo 3's legacy is more obviously clear in Destiny and its sequel, from the way they feel to the storytelling and encounter design. In many ways the things Halo 3 did well proved themselves eternal. Perhaps that's why revisiting it 10 years later feels so temporally disorientating. This is an old game now, but in many ways it's barely aged a day.