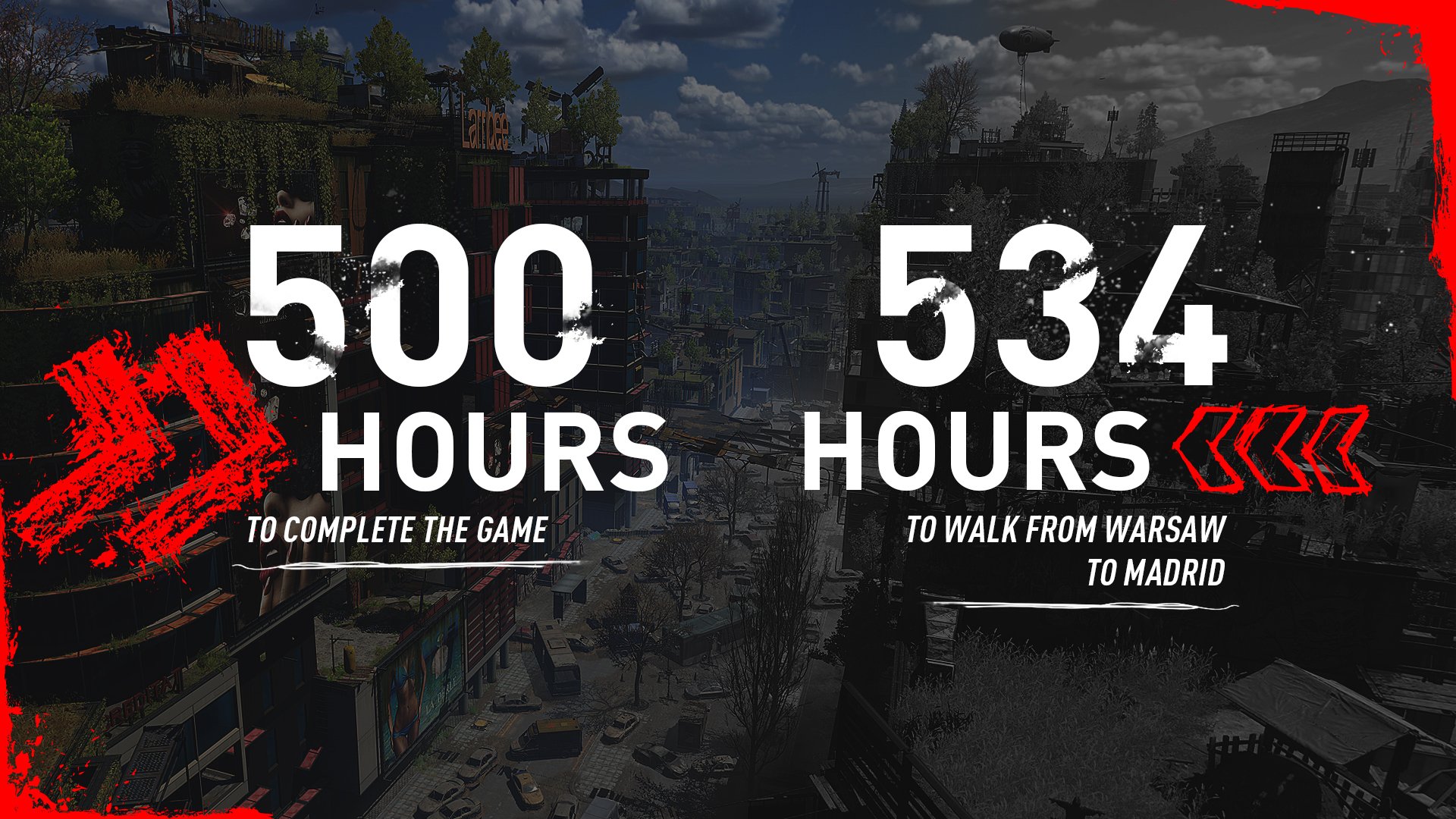 And it looks like a huge improvement from Dark Souls 3.

Dying Light 2 developer Techland has promised that the upcoming zombies-and-parkour FPS will take at least 500 hours to fully complete.

The staggering figure was shared on the official Dying Light Twitter account this weekend. It was quickly followed up by confirmation that it refers to “100% completion rate”, and not the investment expected to bash through the game’s story. That, we’re assured, will be “quicker”.

Still, if you were hoping to scoot around the map sucking up collectables and completing other items to earn that full completion, you’ll need to give up nearly six percent of the entire year. That’s more than 20 full days, without sleep, in case you were wondering. Given we’re already racing through January, you’d better start blocking out that calendar now.

As the Tweet revealing the gargantuan time sink notes, 500 hours is almost as long as it would take to walk from Warsaw to Madrid. A journey that could arguably be listed as a better, healthier, and more productive use of your time. At least you’d be able to sing The Proclaimers truthfully afterwards.

After plenty of potential players posted what can only be described as a collective groan in reply to the tweet, Techland retweeted the original message with further details on the time expectations players should have for a standard playthrough.

UPDATE:
500 hours is related to maxing out the game - finishing all the quests, endings, and exploring every part of the world, but a regular player should finish the story + side quests and do quite a lot of exploring in less than 100 hours, so don't worry!  https://t.co/4R641zkLpg

“500 hours is related to maxing out the game - finishing all the quests, endings, and exploring every part of the world,” the Tweet clarified, “but a regular player should finish the story + side quests and do quite a lot of exploring in less than 100 hours, so don't worry!”

Dying Light 2 Stay Human is the followup to 2015’s zombie-ravaged open world FPS. The story is set 20 years after the original titles and follows a new protagonist named Aiden Caldwell. Thankfully, their parkour skills are more than up to the task, meaning players are free to wall run and swing their way around the city as they befriend of make enemies of the surviving human factions.

After several delays, Dying Light 2 is scheduled to be released on February 4, 2022. It’ll be available on PC, PS5, Xbox Series X/S, Switch (Cloud), PS4, and Xbox One.