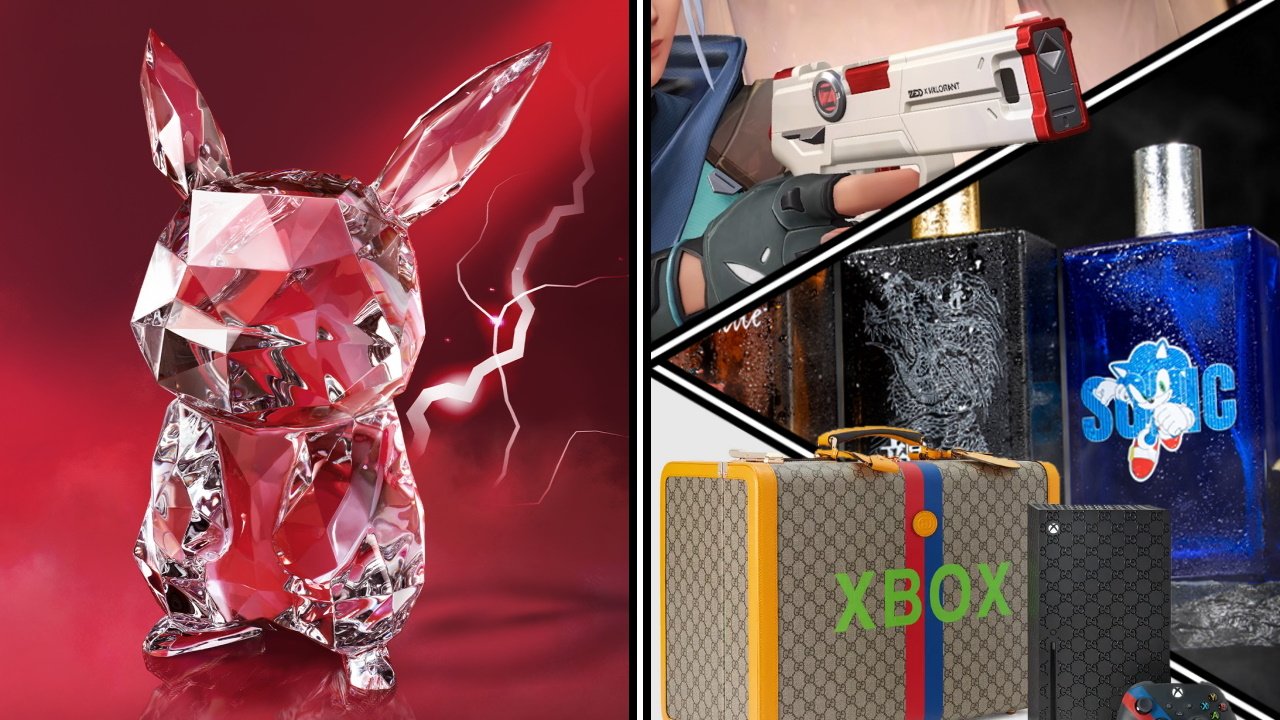 The coolest (and most ridiculous) gaming collabs of 2021

2021 was a year of celebrations. Not only did a vaccine rollout mean many of us could actually see our friends face-to-face again, it was also the anniversary of classic gaming franchises like Pokémon, Zelda, and Super Monkey Ball. As a result, barely a month went by without wild (and often nonsensical) gaming collabs being announced with clothing brands, jewelry manufacturers, and more. So as we reach the end level for 2021, join in remembering some of the the coolest and most ridiculous gaming collabs to have graced our timelines this year.

2021 was pretty much one giant Pokémon party. Artists like Post Malone and Katy Perry held virtual concerts and released themed tracks to celebrate the series' 25th anniversary in style. Speaking of which, what could possibly bring more of a cool factor to a children’s cartoon and video game series than an outrageously lavish crystal model of the series mascot? Kids love figurines!

In November, Nintendo announced a partnership with French crystal manufacturer Baccarat to create the Pikachu Fragment. Presumably aimed at older Poké-fans who had grown up to become millionaires, this cubist recreation of the electric mouse cost a whopping 25 grand to purchase. Of course, if that seemed a little pricey, you could always buy the $440 rounded crystal Pika model or $410 Poké Ball instead. Absolute bargains by comparison.

Pokémon wasn’t the only Nintendo franchise with cause to celebrate this year. The Legend of Zelda saw its 35th anniversary, though – fitting for its older age – it didn’t throw quite as big of a bash. Fortunately, the collaborations we did get were superb, as evidenced by this gorgeous partnership with Aussie clothing brand BlackMilk.

Featuring map dresses, wolf bomber jackets, and a hyrule castle kimono, the BlackMilk x Zelda collab was one of the year’s highlights in gaming fashion. Especially when compared to Levi’s, er, interesting Pokémon designs. Heck, BlackMilk even offered stuff for Skyward Sword fans and Navi stans to enjoy. It wasn’t the first partnership Nintendo has hosted with the brand, either. The end of 2020 saw some stylish Animal Crossing and Super Mario designs debut in the store.

Valorant’s weapon skin design team clearly likes to have fun with their time. Rather than sticking to standard patterns and colors, Valorant offers skins that play with parallax and perspective, or swap out the usual visual style for comic book cell shading. The only downside? They cost an absolute bomb.

This September the team pushed that approach even further, announcing the ZedX Spectrum collection. Created in partnership with electronic dance music artist (and Valorant fan) Zedd, the Spectrum skins were added to an entire new “Exclusive” tier. Pick one up in game and you'll find that Spectrum guns play music while inspected, change color as you move, and have one of the flashiest finishers the game has seen yet.

Pretty cool stuff, but what makes it ridiculous? Well, the Spectrum line was revealed with a bizarre staged “keynote” by Zedd and cost an eye-watering 10,700 VP – that's more than $100 USD. Youch. You can see more of the Spectrum collection (for free) in our breakdown, here.

You didn’t think we were done with improbably expensive gaming tie-ins, did you? Next up it’s the Super Mario smartwatch from Tag Heuer. This $2,150 limited-edition version of the Tag Heuer Connected watch was announced in July and featured the bold reds of our favorite plumber’s dungarees.

Super Mario details were noticeable around the rim of the face and on the watch’s clasp, though the bulk of Mario content was contained within the unique display loaded via the watch's Wear OS. Meeting activity goals led to brief animations of Mario powering up with a mushroom, jumping out of a warp pipe, grabbing a star, and – should you meet your targets – scaling a level-ending flagpole.

Thankfully putting the memory of those weird and ugly RTX 3080 graphics card sneakers to bed, Puma and Nike stepped up in 2021 to offer our feet some actually quite stylish video game designs. First up was the Nike x PlayStation PG5 sneaker. Announced in May, the limited-edition Colorway sneakers paired a white core with the strong blue of PlayStation. And yes, looking closely revealed minute triangles, circles, squares, and crosses, just like on the PS5.

Later on in August, Puma got the pastels out with an Animal Crossing: New Horizons sneaker design. The shoes featured a calming green and white palette, with icons for various popular villagers’ faces popping up all over. They're easily the most soothing shoes to win a 100m sprint in. There's only one question left: when are we getting the Xbox sneakers, Microsoft?

Have you ever wondered what Sonic smells like? Yeah, us neither. But now that we’ve introduced that unwanted quandry to your life, allow us to offer an unnecessary answer: official Sega colognes, unveiled last month. Now you too can wear the scent of a sweaty hedgehog pelting across a patchwork of green squares. Apparently that means citrus, as the official description for Sonic's cologne notes “grapefruit zest, exotic lemon and lime, topped with the scent of the ocean breeze and chilled melon fade.”

For those unconvinced, Sega is also offering Yakuza and Shenmue colognes as well, both of which focus on smokier, woody fragrances fit for a pachinko bar brawl. Oddly, they’re not the only video game colognes from the year. Back in July, new fighting game Guilty Gear Strive got its own improbable fragrances based on lead characters Sol Badguy and Ky Kiske.

It's almost as good as the Bubble Bowl - #Madden21 x @SpongeBob is here! Play alongside your fav NFL players in The Yard @EAMaddenNFL pic.twitter.com/7gO8DjMEO7

As if a sign that the year ahead was going to be largely incomprehensible, 2021 started things with a Madden NFL x Spongebob Squarepants crossover. It saw a Spongebob-themed field added to Madden 21’s The Yard game mode. Giant inflatable Spongebob and pineapple floats? Of course, but that wasn't all. The update added a selection of impressively garish Bikini Bottom outfits for players to don too (no actual bikinis, mind).

We’re not entirely sure whether the Spongebob Madden field is brilliant or terrible, but our editor in chief described the collab as “post-post-ironic”, which sounds smart enough to convince us that it’s probably cool. Cooler than Nickelodeon All-Star Brawl turned out to be, anyway.

You’ve already seen crystal Pikachus and digital dungarees on a Mario smartwatch, but here’s the thing: price ignored, we wouldn’t actually mind owning those items. The same can’t be said for the utterly repulsive Guccibox revealed this November. Yes, when it’s not teaming up with esports brands, the high-end fashion label is attempting to make next-gen gaming unappealing. We want a Series X, we just don't want that Series X.

The embellished new Xbox comes packaged in what is quite possibly the ugliest suitcase ever conceived, with bold yellow, blue and red stripes sitting atop a dull pattern. And, of course, the word XBOX is printed in obnoxious green across the front. Stay classy, Gucci.

You might assume that Gucci would be paying you to tout such a horrendous design, but the fashion brand had the gall to charge $10k for the bundle. Granted it came with an extra controller and Game Pass Ultimate subscription, but really – just look at it. Don’t they know we could buy 24 crystal Poké Balls for that kind of money? Fortunately, only 100 of the limited-edition machines were ever made, presumably because the manufacturers couldn’t stop throwing up on the assembly line.

Fortnite has now carved what seems to be a near-permanent place in the social consciousness. It’s popularity has afforded developer Epic the chance to pull off a frankly ludicrous sequence of collaborations with movies, books, games, TV shows, and more. This August, however, the company took a different tact. Fortnite partnered with Time Magazine’s March Through Time to recreate Martin Luther King’s historic 1963 civil rights movement speech in a custom map created by a selection of Fortnite Creative builders.

Players were able to visit a virtual rendition of the Lincoln Memorial and United States National Mall to hear the speech. After that, they could explore an informative museum covering the civil rights movement in 1960s America. The battle royale action of Fortnite makes it an odd choice of venue for a respectful event, and there were some grating inclusions such as gamified themed challenges to complete which would unlock a D.C. 63 spray for players. That said, the event was clearly aimed to educate the game’s younger player base, acknowledging the massive reach that Fortnite has within a new generation.