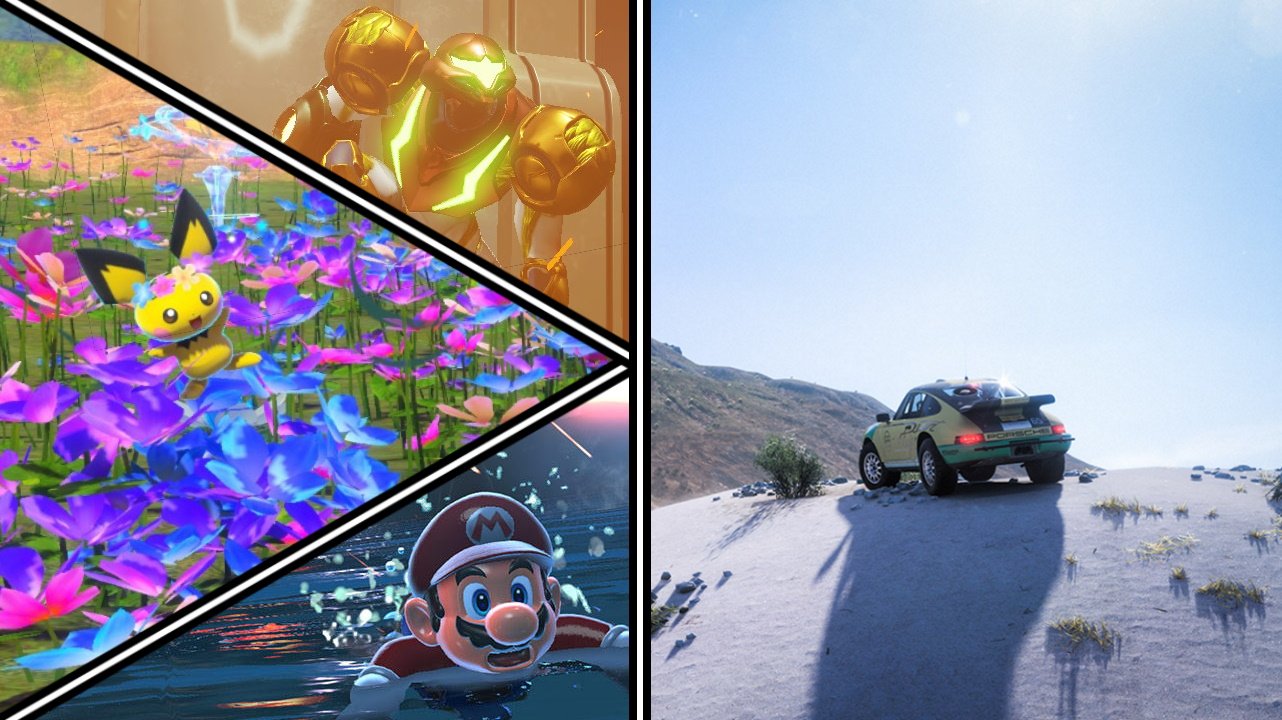 The best video game environments we lost ourselves in during 2021

The last few years have provided plenty of good reasons to crave escapism from the real world. For that and so many other reasons, we thank you, video games of 2021. This year has offered up a wealth of gaming environments for our real-world-weary heads to wander through. But which did we enjoy the most? Covering spooky houses and assassin adventure parks, here are our picks for some of the best video game environments from 2021.

The best video game environments of 2021

The winter months are the perfect time to park your real butt on the couch and send your digital rear forth into new places. If you’ve yet to visit any of the abodes, cities, and worlds below, fear not! There’s still plenty of time to book a ticket to the year’s best video game environments before 2022 arrives.

January may seem a distant, low-poly memory at this point, but looking back it was an absolute stormer for game releases. Hitman 3 brought the conclusion of the World of Assassination Trilogy. More importantly, it offered a veritable playground of assassination to lose ourselves in.This is a game that let us scale the shimmering heights of a skyscraper in Dubai, then frame the butler while impersonating a private investigator at a Dartmoor manor.

With such a wealth of ridiculous routes to success, it was almost impossible to wipe a mischievous smirk from our faces while playing. PSVR support and the transfer of levels from previous games served as the icing on an rat-poison-laced cake, making Hitman 3 one of the best games to stalk through over and over again.

At the opening of the year, Switch ports for the WiiU’s top titles were already standard fare. But Nintendo caught us all by surprise when they announced that 2013’s Super Mario 3D World would be paired with a brand new and largely singleplayer segment. What was even more shocking was just how much content the Bowser’s Fury Expansion contained, and how flipping good it turned out to be.

Mario has never committed to a full open world, but goodness does Bowser’s Fury ever sell the case for it. A joyous amusement park of platforming puzzles and challenges, Bowser’s Fury lets you – and perhaps a paintbrush-wielding friend as Bowser Jr. – loose to tear around it in whatever order you see fit. The action is broken up by Power Ranger boss fights in which Cat Mario goes super size and saiyan to biff a ferrometal Bowser back into the ink. Unrepentantly cheer-inducing stuff.

True to its name, developer Playground Games just understands fun. The Forza Horizon series – once a mere spin off from a straight-faced raver – has embraced the glee at the core of its driving. This latest entry lets you tear across a recreation of the Mexican countryside that’s bursting with color and variety.

Mountains, jungles, and beachfronts; even a bubbling volcano is yours to screech around. Exploring Forza Horizon 5’s landscape is so much fun that it’s easy to forget how you probably should be spending some time racing. We’ll get back to it, honest. Riiiight after this next Barn Find.

People who like horror games are weird. What kind of soul would willingly send itself into the darkest depths of a doll-filled house just for kicks? Us, apparently, and we bloody loved it too. Most of Resident Evil Village’s areas didn’t quite deliver the stick-in-your-memory-ness of the Spencer Mansion, R.P.D Station, or Baker Estate. We say most, because Village’s House Beneviento is likely to haunt us for the rest of our days.

As you step into this clifftop retreat, it’s clear that something is wrong. Everything is too normal. It only takes a short elevator ride to the basement to confirm those fears. It was a mistake to come here. We’ll keep spoilers to a minimum, but protagonist Ethan Winters soon finds himself without any weapons, forced to complete a selection of unsettling puzzles like examining a mannequin of his wife, Mia.

Nothing compares to the horror facing you as you try to leave, however. Giggling, gurgling, and unfathomably grotesque, it’s a foe that’ll stay with you far longer than its screen time. Even when you make it back to the ground floor, Beneviento isn’t done with you yet, forcing Ethan into one last showdown with the resident murder-puppets.

Metroid planets don’t often get memorable names. There’s Zebes and, uh, Talon? Yeah – we forgot the rest. Dread doesn’t do much to improve the convention, shipping Samus off to planet ZDR after a taunting message reveals signs of the thought-extinct X-Parasites lurking on the surface. Thankfully, this world is far more than a jumble of letters. Developer Mercury Steam has brought 2D Metroid to life like never before, with subtle details and animations sprinkled throughout each world chunk.

Charging through the foliage of Ghavoran causes wildlife in the background to scatter, while the smoldering heat of Cataris is visible behind windows and walls in the background of its metallic hallways. Each area is distinct, but not overly reliant on the Ice World, Lava World tropes of most games. And in every zone you’ll need to navigate around then tiptoe through the sinister, pristine hallways that mark an EMMI’s domain. Step inside and a distorted filter makes it clear that, here at least, Ms. Aran is very much the bounty being hunted.

Genshin’s newest nation to explore was certainly worth the wait. Inazuma brought the architecture and folklore of Japan’s shores to MiHoyo’s RPG, with a storyline based on the “Sakoku” (locked country) period of the real-life country’s isolation from the world. Varied landscapes tell the story of the nation’s lonely existence within the world of Teyvat, with corruption and rot poisoning sacred landmarks and the remains of previous crushed uprisings.

Despite the darker tone compared to the game’s launch areas of Liyue and Mondtstadt, there is an incredible sense of beauty within the melancholy (helped in huge part by Yu-peng Chen’s phenomenal score). The feeling of a once-great land falling into disrepair by neglectful management by its Archon ruler, obsessed with keeping things exactly the way they remember and refusing to see how change is the natural order of the world.

Since release, three more islands have popped up in the Inazuma archipelago, each with strikingly different aesthetics. Sangonomiya’s dreamlike coral plateaus, Tsurumi’s mysterious fog-shrouded peaks and the devastated battleground of Seirai island all tell their own stories simply by looking at them. But the notes dotted around and quests you complete answer just enough of the questions the land leaves behind to keep you digging out more. Environmental storytelling is more than just a skeleton on a toilet.

Blackreef island’s inhabitants don’t want you there. They make that very clear, very early. The trouble is, when stuck in a localized time loop, you don’t really have a choice in the matter. But while every mask-wearing bozo on the island is ready to gun you down on sight, the locations themselves swiftly become your greatest ally. Explore Blackreef’s nooks and crannies, and you’ll uncover shortcuts to circumvent the rowdy mob. You’ll learn how avenues open and close at different times of day. Each loop makes you stronger through knowledge.

The real delight, however, comes in the stories you’ll uncover while shifting to and fro. Blackreef is littered with miniature narratives that span the course of a day. That cannon being constructed in the afternoon? Return in the evening to catch some fool launching themself from it. An enemy practicing guitar in the morning will be an expert by the time the sun sets. Blackreef may be a cold and hateful slab of rock, but it’s one brimming with so many stories that you’ll struggle to tear yourself away.

A new Pokémon Snap. We’re still not entirely sure we can believe it. What’s more shocking is just how well it captures the spirit of the original. Every biome within the Lental region is brimming with Pokémon life. Admire the fauna from a distance or hurl apples – sorry, fluffruit – at everything you see. The choice is yours. Don’t worry, we’re assured that the Pokémon don’t mind being bonked on the noggin.

As you increase your research level at each zone, you’ll witness changes in the Pokémon around you. As they grow comfortable with your presence, new creatures will emerge, allowing stories in miniature to play out as you pass. You’re here to secure five-star snaps, but each first run is largely spent in awe of the world around you. Immensely replayable, New Pokémon delivers a mood-lifting world we’ll be ducking back into for quite some time to come.

Those were our favorite video game environments from 2021. What were yours? Share them in the comments below. And if you’re after more roundups from the year, you can also check out yesterday's collection of the finest video game tunes from 2021. There aren’t even any haunted dolls in that list!