Ignoring the gravity of the situation. 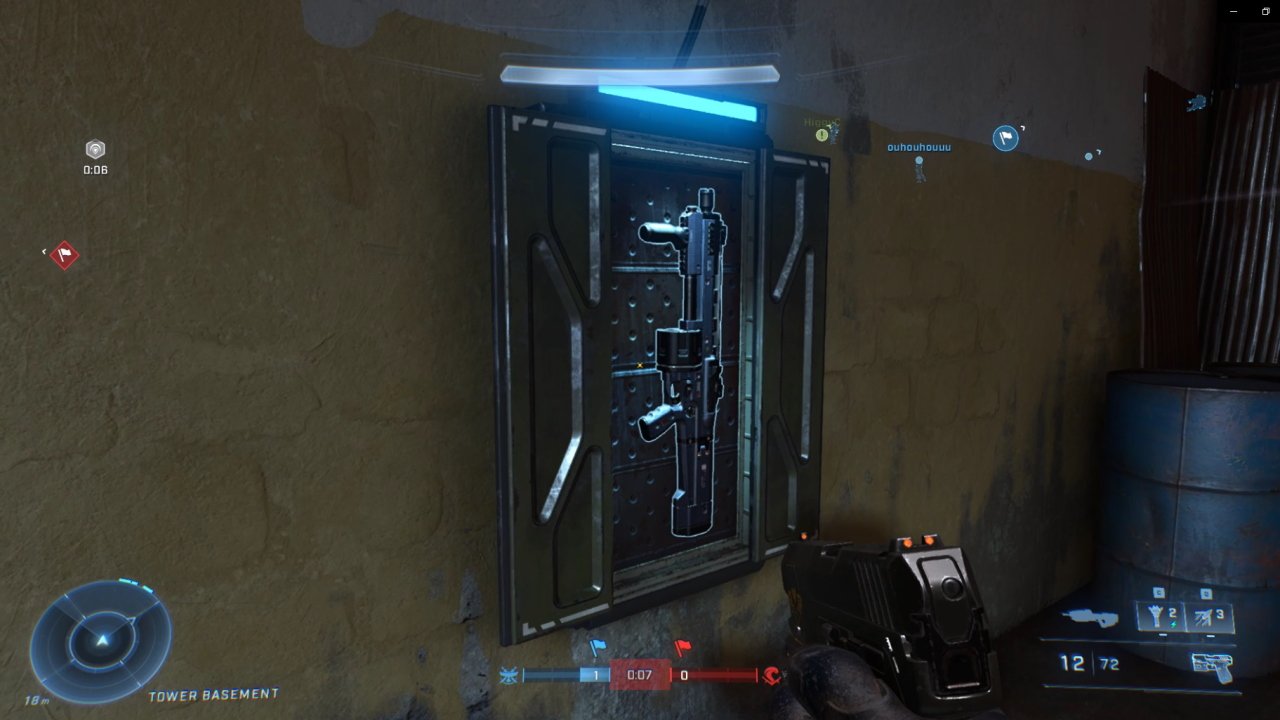 Lead developers Tom and Tony Cannon deliver our first real look at how Project L's battles will play out.

Halo Infinite’s multiplayer beta lets our Spartans loose with a cavalcade of weapons to unleash on one another. We’ve scoured each map to find all the weapons in Halo Infinite that you can grab to unleash on the opposition. Our Halo Infinite weapons list covers all types, from assault and plasma rifles to snipers and rocket launchers.

Our Halo Infinite weapons list splits the game’s guns into key categories based on their type: pistols, assault rifles, shotguns, snipers, launchers, and melee weapons. At the launch of the game's multiplayer beta there are 22 weapons included in the game. We’ll also do our best to explain where you’re able to find them around the maps. First here's the quick weapons list, followed by a longer breakdown of each Halo Infinite weapon.

MK50 Sidekick: The sidearm you’ll start each game with, effective over medium-to-long range, particularly when aiming for the head.

Plasma Pistol: The pistol can be charged up to fire a shot which will instantly break an enemy Spartan’s shield. Found on weapon cabinets affixed to walls on most maps.

Mangler: This banished weapon fires a slug shot that’s effective up close or at range, if you can keep it on target. Includes a blade for extra melee damage. Found in weapons cabinets

Disruptor: This new automatic pistol details electric damage and is capable of disabling vehicles if you hit several shots in a row. Found in weapon cabinets affixed to walls in most maps. Likely only worth using in Big Team Battle.

MA40 Assault Rifle: The standard rifle you’ll start most game modes with. The high rate of fire for the MA40 works effectively at close-to-medium ranges.

BR75 Battle Rifle: A burst-fire rifle you’ll find on weapon cabinets affixed to walls in most of Halo Infinite’s maps. It’s effective at range and is an instant kill to the head when shields are broken.

VK78 Commando: A new addition to the Halo series, the Commando is a full auto rifle with a much slower rate of fire and heavier recoil. Found on weapon cabinets affixed to walls in most of Halo Infinite’s maps. Deals heavy damage and has high precisions at range, rewarding those who tap fire or keep it on target.

Plasma Carbine: This plasma rifle fires in three-round bursts which gently track enemies you aim towards. They deal heavy damage to shields but aren’t effective at finishing an unprotected enemy. Also found in weapon cabinets

Sentinel Beam: We’ll be honest, we weren’t entirely sure what category to dump the Sentinel Beam in. If you can keep its laser trained on target, it’ll melt through them with increasing damage over time. The Sentinel Beam also passes through enemies, allowing it to hit several targets at once (if they line up).

CQS48 Bulldog: Halo Infinite’s main shotgun. Found on weapon cabinets affixed to walls on some maps. The Bulldog fires a chunk of pellets that deal high damage at close range. When fighting up close, following up on shot with a melee attack is sufficient to kill an enemy.

Heatwave: A new take on the scattershot shotgun, the Heatwave fires a horizontal line of bouncing projectiles that deal massive damage if they all hit a target up close. Use the alternate fire to swap the orientation to vertical. The Heatwave is found in weapon cabinets on certain maps, sometimes alternating with the Bulldog.

S7 Sniper Rifle: A new variation on the classic Halo sniper rifle. Spawns on special Power Weapon pads on specific maps. Capable of killing in a single shot to the head.

Stalker Rifle: This alien sniper isn’t nearly as effective as the S7, but still proves its worth on long-range maps. It’s a relatively slow firing weapon which takes three shots (if the last is a headshot) to down a Spartan. Found in weapon cabinets on very specific maps.

Shock Rifle: This new weapon is an unusual and effective electric sniper. It’s basically a railgun, firing a direct-line burst of damage. Aim for the head for maximum damage. Hits from the Shock Rifle can also disable vehicles that are struck repeatedly. Found in power weapon positions on certain maps.

M41 SPNKR Rocket Launcher: Halo Infinite’s rocket launcher is one of the strongest power weapons in the game, provided you don’t blow yourself up when shooting at close range. Spawns on designated Power Weapon pads on specific maps. Rockets travel slowly, making it less effective at longer ranges.

Hydra: The Hydra is a new power weapon that fires homing micro missiles that can lock on to both people and vehicles. Its base fire mode launches rapid missiles, while the second requires locking on to a target. Damage is reduced using the lock-on, tracking mode. Found on Power Weapon pads.

Skewer: This anti-vehicle weapon fires a massive spike at targets, instantly killing Spartans who are hit, or dealing massive damage to all vehicles. It requires a lengthy reload after each shot but is capable of downing smaller vehicles like the Mongoose and Ghost in a single hit. Found on Power Weapon pads.

Cindershot: This Forerunner grenade launcher fires bouncing balls of plasma which explode after a brief delay. Its base mode is capable of downing Spartans in just two shots. It has an alternate fire mode which swaps the weapon to launching homing missiles in a similar fashion to the Hydra. The difference here is that the missiles follow where you’re aiming, not a locked-on target. Found on Power Weapon pads.

Ravager: This plasma launcher unleashes three energy balls per burst which will arc like grenades before exploding on impact. Just two hits will kill a Spartan. It can also be charged by holding the fire button for a single, larger shot which leaves a damaging pool of plasma where it lands. Found on Power Weapon pads.

Energy Sword: The staple melee weapon of Halo, the Energy Sword returns in Infinite and is no less deadly. Wielding it allows the user to lunge over greater ranges at enemies in front of them, killing in a single hit. Appears on dedicated Power Weapon pads on certain maps.

Gravity Hammer: The Grav Hammer also returns in Infinite, and can down Spartans in a single hit if they’re close enough to its slam. The hammer swings slowly and the range is tighter than before, dealing only small damage and knockback if an enemy isn’t in its killing range. Also found on Power Weapon pads on certain maps.

While that’s the complete Halo Infinite weapons list for now, we’ve no doubt that 343 Industries plans to add more tools of destruction down the line. Head to our Halo Infinite hub page to find out more about the latest game in the series.