Sure to play ball with the rest of the cast. 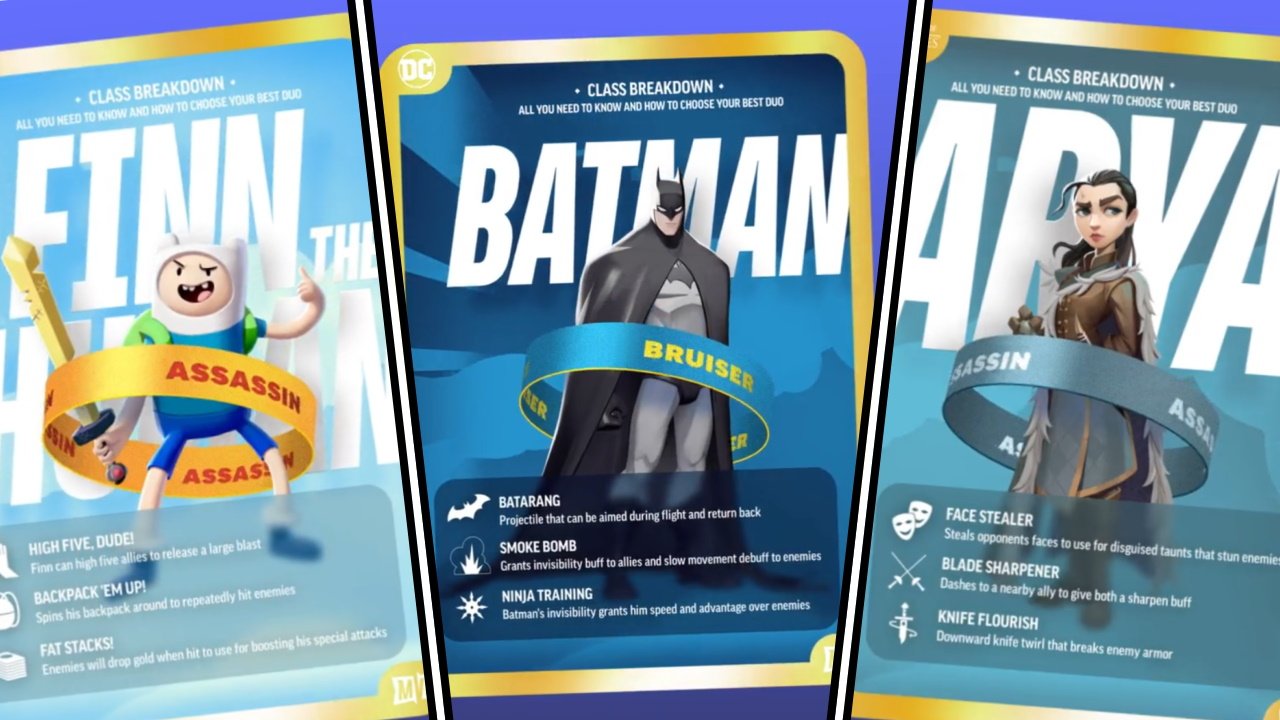 Umbrellas can be your weapon of choice in Splatoon 3

Stand under my Splat Brella.

Warner Bros. mightiest (and meekest) characters will soon be ready to throw down in MultiVersus, a brand new platform fighter. Think Super Smash Bros. but starring Batman, Harley Quinn, Arya Stark, Shaggy, and Finn from Adventure Time. Yeah, it’s an unusual bunch. We’ve rounded up the MultiVersus confirmed character roster below to let you know all fighters announced as joining the brawl when the game releases.

Since the game’s reveal, 19 MultiVersus characters have been confirmed so far, though some have yet to actually join the playable roster. The characters originate from a huge range of properties including Game of Thrones, DC, Adventure Time, Looney Tunes, Steven Universe, and more. There’s even a MultiVersus original character included. Here’s the full character roster for MultiVersus, with a closer look at each below:

Many of the characters also come with their own MultiVersus Stages, though there are far fewer than characters right now. You'll also need to understand the many unique effects characters apply -- fortunately we have a full MultiVersus status effects list here! Below we've got a closer look at all the confirmed characters so far, including voice actors for many, their special ability names and their MultiVersus descriptions.

Description: Born the third child of Eddard and Catelyn Stark, Arya never wanted to be a lady or waste time with formality. She thought that was a boring task better left to her siblings. But when her father was murdered and her family deposed, young Arya found herself on a new journey that would take her across Westeros, and eventually to Essos where she trained to be a Faceless Man that transformed her into an accomplished swordswoman and deadly assassin. It was a transformation that would change the course of her life - and all of Westeros - forever.

Description: The Caped Crusader and defender of Gotham City known only as Batman was born the night that a young Bruce Wayne saw his parents gunned down in front of him. Since that day, he has pledged to battle crime and protect the people of Gotham City. Despite having no superpowers or extraordinary abilities, his dedication, willpower, and intelligence have helped him stand shoulder-to-shoulder with the universe’s greatest heroes. His arsenal of cutting-edge gadgets funded by his family fortune doesn’t hurt, either.

Description: One of pop culture’s most enduring icons, Bugs is a movie star, action hero, and sports legend with a career spanning over half a century. With plenty of Multiverse experience under his belt and a long history of team-ups, Bugs is arguably one of the least-fazed fighters in the face of this multiversal mayhem. He’s humble about it, but this smart aleck hare has been yukking it up on screens small and large since before most of these other fighters could walk. Armed with his wits and a few ACME-brand accessories, he’s ready to let loose the looniness.

Description: (Mostly) the last human from the Land of Ooo, Finn is a young warrior who has spent most of his life doing quests and helping the forces of good in their never-ending battle against anything and everything evil. With his sword, limitless imagination, and best friend/adopted brother Jake the Dog, there’s no villain he can’t defeat. When he’s not slaying evil, he loves just chilling and playing some video games with BMO.

Description: Garnet is the leader of the Crystal Gems - A group of extraterrestrial rebels hiding out on Earth. Along with the other Gems (and Steven), Garnet has sworn to protect the Earth from any invaders. She is actually the fusion of two Gems - Ruby & Sapphire - and might just be the most stable Fusion in existence. She may seem cold and stoic, but Garnet has a huge heart and will do anything to protect those in her care.

Description: Harleen Quinzel was a psychiatrist at Arkham Asylum until the fateful day she met the psychotic villain The Joker… and everything changed forever. After years of being The Joker's sidekick and main squeeze as Harley Quinn, she finally found the courage to leave and forge her own destiny. Her rise to power hasn’t escaped Batman’s notice, and he’s noted that she has the potential to become one of Gotham City's, or even the world’s, greatest villains.

Description: The enigmatic, mechanical marvel nicknamed “The Iron Giant” crash-landed off the shore of Rockwell, Maine shortly after the launch of Sputnik in 1957. With no memory of his past and no clear direction for his future, he was found by a young boy named Hogarth Hughes, who quickly became his best friend. Loyal and brave, the Iron Giant is a defender of the innocent and has vowed to always emulate his hero: Superman.

Description: As far as Jake knew, he just happened to be born with his magical Stretchy Powers. He would find out far later that he was actually the offspring of a shapeshifter named Warren Ampersand. But no matter where he came from, Jake has created a happy life for himself as a hero and adventurer with his best bud, Finn the Human. When he’s not adventuring and punching major bad guy buns Jake likes to hang with his beloved wife Lady Rainicorn and their five Dog/Rainicorn/Shapeshifter pups.

Description: Overcoming the odds and empowering his allies is a way of life for LeBron James, winning multiple NBA titles, MVPs and Olympic Gold medals while being known as the ultimate teammate around the world. However, even one of the best players in NBA history couldn't anticipate the consequences of turning down the egocentric AI “Al-G Rhythm.” Thrown on a world-hopping adventure through the “Server-verse,” LeBron teamed up with Bugs Bunny to lead the legendary Tune Squad to save his son from Al-G in the ultimate Space Jam. Now, facing a new threat, LeBron looks to use his world-class playmaking skills to help his new friends defend their worlds.

Description: Lots of people have close relationships with their grandparents. And then there’s… whatever Morty has with his grandpa, Rick. While under Rick’s “supervision” Morty has been dragged all over the universe. Whether it’s through countless different time streams, or in and out of various dimensions (mostly legally), he does his best to remain optimistic despite the crushing truths of reality.

Description: The world of Zanifeer was one of the first to fall victim to the Nothing during the great dimensional cataclysm. As far as most people knew, there were no survivors… except one. Reindog is a Royal Guardian - A long-lived protector of the Zanifeer royal family assigned to keep them safe. Although he looks fluffy and sweet, the heart of a warrior beats in his chest and he will do whatever it takes to protect those he loves. With the amazing powers from his gem he hopes that he can even find a way to bring back his beloved family.

Description: A nihilistic mega-genius and one of the galaxies most wanted. Earth-hailing scientist Rick Sanchez has seen just about everything reality has to offer. Nearly always accompanied by his grandson Morty, the two of them have saved the galaxy and the space/time continuum dozens of times.

Description: The last thing Shaggy remembers before The Change was exploring another spooky old mansion with his pal Scoob, just like any other day with the gang. He found a strange glowing crystal and, thinking it was rock candy, went to take a bite. There was a FLASH… and then blackness. When he came to, he found himself in possession of incredible powers. He doesn’t know where they came from or how they work, but he’s vowed to use them to vanquish evil and protect the little guy. As soon as he gets some lunch, that is.

Description: The only known hybrid of a human and a Gem, Steven was always destined to be special. He spent most of his childhood raised by a trio of Gems hiding out on Earth, but it wasn’t until he became a teenager that he started to grow into his own potential as a hero. With his big heart, unstoppable optimism, and incredible Gem powers; Steven will always save the day!

Description: Disaster struck Kal-El’s home world of Krypton when he was just a baby, leaving his parents with no choice but to send him to the stars. His rocket crash-landed on Earth where he was found by Martha and Jonathan Kent and raised as their child. As he grew older, the light of Earth’s yellow sun activated his incredible Kryptonian powers, which he vowed to use to protect humanity and stand up for truth and justice. As one of the founding members of the Justice League he has been an inspiration for countless generations of heroes as he continues to fight evil in all its forms.

Description: Like the offspring of a tornado and a particularly angry electric razor, the Tasmanian Devil is a spitting, surly ball of manic energy. If you can get him to calm down, they say he’s as sweet and gentle as a kitten, but that’s a pretty big “if.” Taz has a temper that’s outmatched only by his appetite and, trust us, you don’t want to see this Devil when he’s hangry.

Description: Ever since they first laid eyes on each other, Tom and Jerry have had a complicated relationship. As a housecat and a mouse they should be mortal enemies, but the two have nonetheless teamed up many times over the years. Like many “toons,” Tom & Jerry fight with a zany, madcap style and display nearly indestructible levels of durability. They’ll be great champions to have in the battle against the Nothing so long as they can stop fighting each other long enough to do it.

Description: Velma has been solving mysteries since most people were still in diapers. With her insatiable appetite for answers and expert nose for knowledge, she’s the perfect mystery-solving machine. These days, she’s the undisputed super sleuth of Mystery, Inc., traveling with her friends to uncover criminals and bust hoaxes wherever she goes. She can sometimes get in over her head when she forgets to take her nose out of her books, but don’t underestimate her - Velma Dinkley can still kick some serious butt when she needs to.

Description: One of reality’s mightiest heroes, “Wonder Woman” is a name both feared and loved across the Multiverse. A fierce warrior, proud commander, and kind leader, Diana was sent to the World of Man by the Amazons to act as a champion of peace. She’s defeated countless villains both by herself and as a founding member of the Justice League, and she has served as an inspiration for a whole new generation of heroes.

Those are all the characters in MultiVersus that have been announced so far, but the developers have already promised that more will be revealed soon. Which is your favorite? Let me know in the comments below. Looking to improve in MultiVersus? Our tips and tricks guide will teach you things that the tutorial won't.