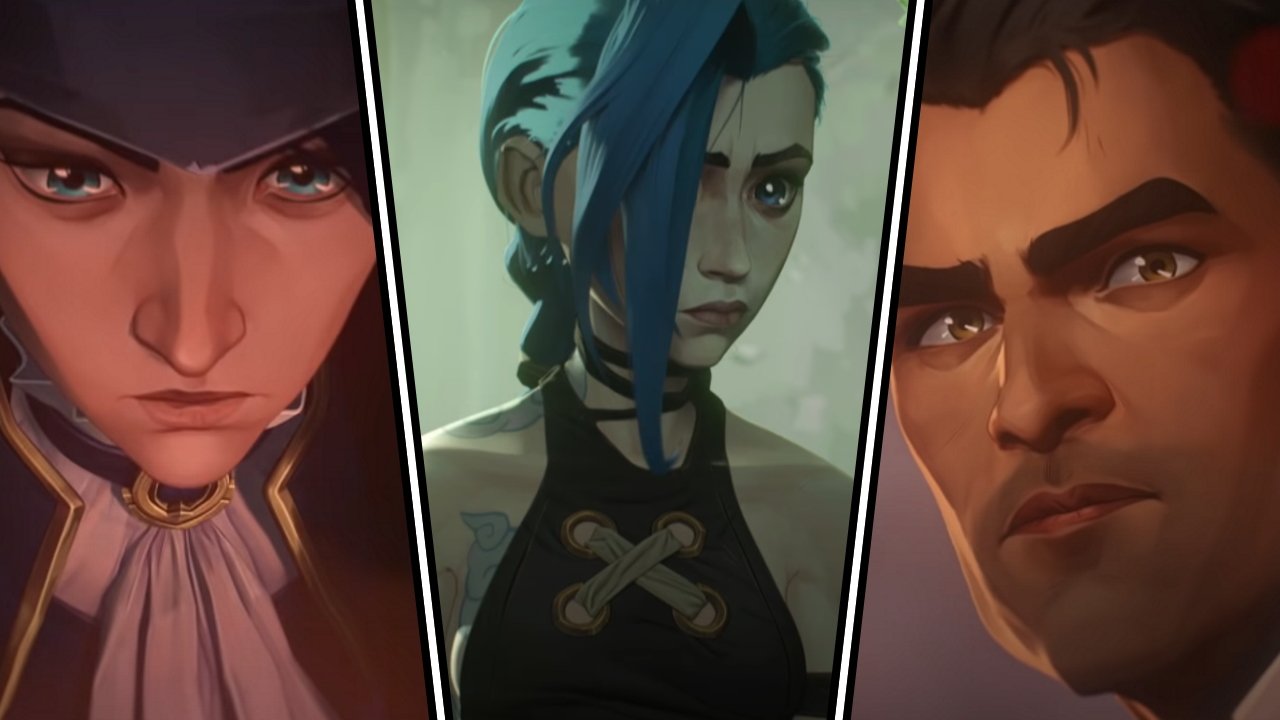 Who's who in Arcane: All League of Legends characters in the show

Netflix’s Arcane series dives deep into the layered city of Piltover and the history of Riot Games’ MMO, League of Legends. If you’re not a fan of the game, that’s not a problem; Arcane – the first, three-episode act at least – does a stellar job of relaying its own contained story without smothering you in obscure references to game events or characters.

Those in-game stars do show up, though, and in quite the number. If you’ve previously dabbled in League but can’t remember the major cast or are just keen to learn more about the world, we can help. We’ve put together a quick League of Legends lexicon which breaks down all the League of Legends characters in Arcane and how they compare to their in-game variants. We’ll cover it episode by episode to avoid spoiling anything you haven’t seen so far.

All Arcane League of Legends Characters

Spoiler warning: While we’ll cover characters episode by episode, it’s worth noting that their League of Legends descriptions may spoil potential future events in Arcane. The series sticks fairly closely to the established lore of the game, and given the opening act features characters younger than their in-game versions, they’ve yet to achieve many of the feats they’re famous for. If you want to watch the series without prior knowledge, we’d advise coming back after viewing.

One of the leading stars of Arcane, Jinx begins the show as a child named Powder. She’s the younger sibling of Vi, who remains extremely protective of her. In the first few episodes we get to see that she has a penchant for tinkering with traps and shooting guns, though her unusual devices aren’t quite ready for action just yet. Expect the series to stick with her as she transforms from the shy and diminutive Powder into the Jinx that League fans know all too well.

In League of Legends, Jinx is one of the most recognisable champions in the game’s extensive catalogue. If her stark blue hair and eccentric personality weren’t enough, she’s also known as the Loose Cannon thanks to her love of explosive tools like her Super Mega Rocket and a tendency to talk to her weapons. Jin occupies the Marksman class.

The pink-haired Vi is the other leading star of Arcane, and Jinx’s older sister. After her parents were killed, she was adopted by Vander and raised to work jobs stealing from the rich. She’s a rough bruiser who isn’t afraid to get stuck in with her fists, and begins the series fiercely defensive of Jinx. It doesn’t take long for things to go south, however, and we can expect Vi’s journey to pick up pace as we head into the next two acts of the show.

Be prepared for potential spoilers. Grown up, Vi is a member of the Wardens whose job it is to maintain peace in the undercity. Vi remembers nothing of her childhood, with her name only arising from the tattoo on her face. She’s still hot headed and prone to choosing violence over diplomacy, but she now works with law enforcement, specifically alongside Sheriff Caitlyn in attempts to hunt down Jinx. Vi wields a pair of Atlas Gauntlets which she uses to batter her foes down relentlessly. Vi occupies the Diver class.

We get a very brief introduction to Ekko in Arcane’s first episode, and it’s clear that he’s a friend of both Jinx and Vi. Ekko is very young during the opening events of Arcane, but he has a clear interest in tinkering with equipment.

In League of Legends, Ekko is still a boy, but one capable of manipulating time thanks to his Z-Drive invention. Using it, he can see possible realities and rewind time to ensure the optimal result is achieved. He strongly believes in creating a good future for Zaun, the undercity of Piltover. Ekko occupies the Assassin class.

We get a brief introduction to Singed at the tail end of the first Arcane episode. He’s a gaunt, balding scientist who appears to be working on some kind of transformative potion which enhances the strength, size, and fury of those injected.

Singed’s League incarnation is a deadly and inhumane alchymist who pursues knowledge above all else. He’s also become fully bald by this point. His distinctive appearance includes bundles of mummification-style wrapping across his mouth and torso. He crafts noxious poisons which he employs in battle to damage and slow enemies or boost his own capabilities.

At the start of episode two we get to meet the person that Jinx and Vi were robbing, and it’s none other than League of Legends champion Jayce. In Arcane, Jayce is desperately trying to prove his worth as an inventor, but his idealistic dreams lead him to stray beyond the accepted bounds of Piltover’s academy. His interest in the Arcane comes thanks to another character, Ryze, saving his life in the past.

In League, Jayce is a seasoned inventor who strongly believes in the research and progression of a city like Piltover. His knowledge makes him appear arrogant to others, though he focuses his work on efforts that should benefit all. He used to work alongside another fellow inventor Viktor, though the two eventually came to blows over their starkly different moral compasses. He wields a mighty hammer that can be adjusted mid-fight into a cannon capable of firing powerful blasts at his foes. Jayce occupies the Artillery class.

Right behind our inventor Jayce, we’re introduced to Caitlyn, the daughter to wealthy members of the aristocracy. She’s friends with Jayce, but ends up restricted from contact following his accident at the lab.

In League of Legends, Caitlyn is a seasoned hunter, and known as the Sheriff of Piltover. After her house was raided and her parents kidnapped, Caitlyn’s attitudes hardened as she tracked them down and developed her skills as an investigator. She was recruited by the Wardens, promoted through their ranks, and now works alongside the far more wilful and reckless Vi to track down criminals including Jinx. In League matches, she makes use of a massive sniper rifle, along with an assortment of traps, to disable and damage her foes. Caitlyn occupies the Marksman class

As League of Legends characters in Arcane go, Ryze gets the briefest of appearances. It comes during Jayce’s flashback to a childhood disaster. The Rune Mage saves Jayce and his mother in the midst of a harsh snowstorm by using his Realm Warp power to transport them to safety.

In League, Ryze is a powerful and ancient sorcerer who hunts the land for World Runes – remnants of the power that originally forged the world. Over 1000 years old, Ryze has journeyed extensively and interacted with a huge number of other champions. In-game he attacks and disables with magical strikes, or can relocate his team with a group teleport. Ryze occupies the Battlemage class.

Assistant to the Dean of the Academy—an outsider with a brilliant mind. Meet Viktor #Arcane pic.twitter.com/lbY2WaM96C

After Jayce’s apartment explodes, Viktor arrives to investigate what happened. Viktor is assistant to the Dean of the academy, though his interests may not align entirely with theirs. Viktor grew up in the undercity before proving his worth in Piltover. He sees potential in Jayce’s work and agrees to help him, giving Jayce a new purpose in life.

In League’s world, Viktor has devoted his life to advancing humankind, though his methods are far from what most would consider humane. He believes in merging technology and flesh to create a more powerful whole. He created robotic champion Blitzcrank and regularly clashes with Jayce over their differing views. In game, Viktor can collect fragments to augment his own abilities into more powerful variants. He unleashes a variety of technological powers on his enemies. Viktor occupies the Battlemage class.

Heimerdinger is a yordle scientist, and the esteemed dean of the Piltover Academy. He holds a prestigious place on the city’s council and vehemently opposes research into the Arcane based on his previous experience. Despite this, he attempts to help Jayce receive a less severe penalty after discovering his research.

Known at the Revered Inventor, Heimerdinger is an eccentric scientist who dedicates himself to challenging problems. For the purposes of warfare, he’s created a variety of deadly tools. Heimerdinger can deploy turrets, unleash missiles, and toss grenades, all which can be upgraded mid-match. Heimerdinger occupies the Specialist class.

As far as we’ve spotted, there are no new League of Legends characters in Arcane Episode 3. We'll update this if any details we've missed come to light.

Similarly, we didn't see any new League of Legends characters in Arcane Episode 4. We'll be sure to update this is if it turns out we've missed any subtle additions.

Calling Kindred a character in Arcane is a bit of a stretch, but the intertwined figures do make a very short cameo as Vi explores a brothel in the undercity. The two figures, often known as Lamb and Wolf, are seen relaxing together, with Lamb enjoying a pipe of something. Even in their chillout time, those masks give the pair a sinister air.

In League of Legends, Kindred appear as an animalistic pair of spirits, more literally embracing the aspects of the creatures they're sometimes named after. Described as "the twin essences of death", the linked duo have been known to take many different forms in the game's lore. Players control Lamb when moving around in League, while Wolf follows and is directed by certain abilities. Kindred occupy the Marksman class.

There are no explicit new characters in Arcane Episode 6, but we couldn't miss including this brief reference to the miniature muder machine Teemo. He appears in a children's textbook, which appears to be highlighting just how deadly a menace the little Yordle can prove to be.

In League, Teemo is either adorable or terrifying, depending on who you ask. Supposedly moral and with a warm personality, the little furball is seemingly capable of switching off his emotions during fights in order to ruthlessly kill any and all opposition without remorse. A master operative, Teemo can turn invisible, is capable of moving at great speed, and won't hesitate to turn his enemies into toxic dart pincushions. Teemo occupies the Specialist class.

Those are all the League of Legends characters in Arcane that we’ve spotted so far. Who would you like to see appear, even if just for a brief cameo? Let us know down in the comments.