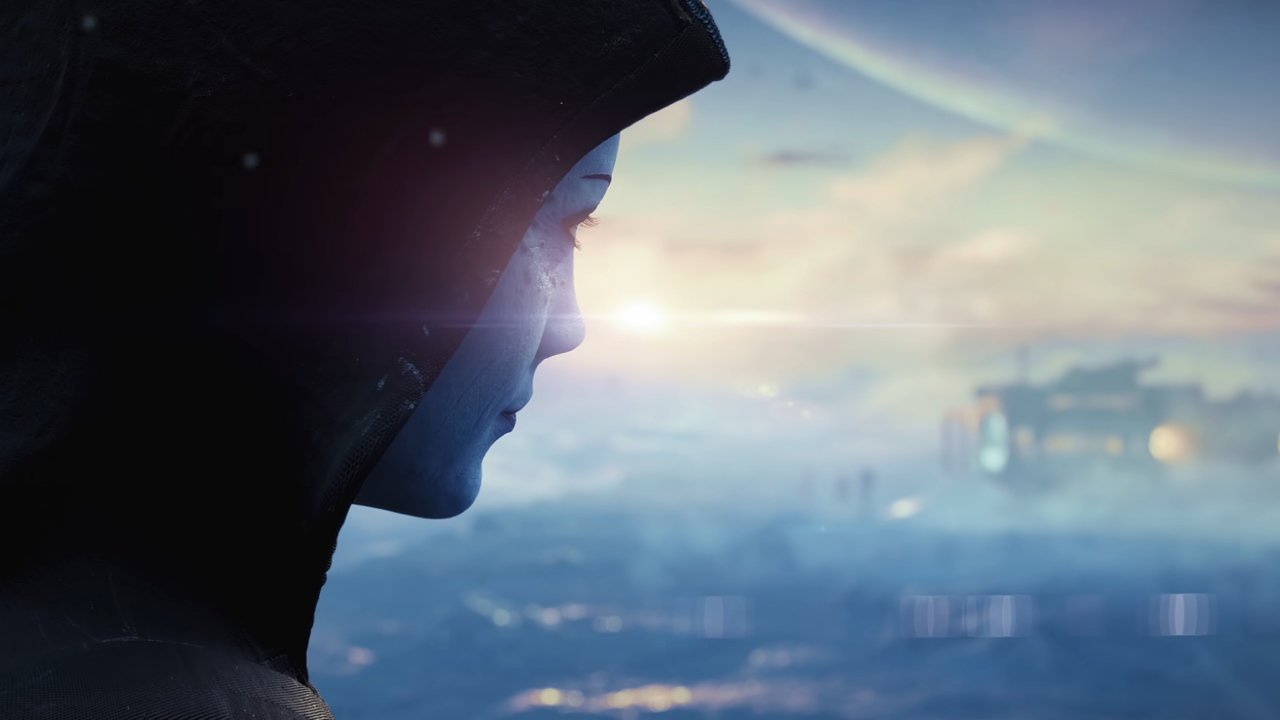 Don’t worry fellow Garrus Vakarian stans, the next Mass Effect title is still in the works. We can’t confirm that our favorite Turian renegade will make an appearance (or even still be alive) in the new game, but just the thought of rejoining that universe – Garrus or no Garrus – has us giddy with excitement.  Thanks to this weekend’s N7 celebrations we can finally stop getting our Mass Effect style fix from rewatching The Expanse, because BioWare has served up some fresh clues as to where the Asari-filled universe is heading.

The new teaser poster showing a crew exploring a suspiciously Geth-shaped crater has caused Mass Effect 4 speculation to explode on the internet. To celebrate one of the most beloved gaming universes out there, we’ve searched the stars for the most exciting fan theories for Mass Effect 4. That is, if it even is a continuation of the original trilogy. Hop in the Mako, because this rumor rover is rolling out.

To get you warmed up for the theories, let's take a quick look at that new teaser once again:

We have another #N7Day surprise for you from the team working on the next Mass Effect.

Thank you all for being the best fans in the world! pic.twitter.com/kUwASGJhcx

The Geth are at the center of the story

Okay, thanks to this week’s N7 reveal, this one is all but confirmed rather than a theory, but the implementation is what really matters. The gigantic crater in the recently revealed poster clearly mimics the shape of a Geth’s head, right down to orthogonal scar lines which match the lens flare from previous games. Looking at the image in more detail, it’s apparent that several bodies are half buried around the crater itself – bodies that appear to be those of Geth.

If this new title is set after the events of Mass Effect 3, it begs the question: which ending did Shepard Canonically choose? Destroying all synthetic life was the most popular according to BioWare’s own data, and it’s the only ending to tease Shepard’s survival. But if BioWare takes that path, it likely means the genocide of the entire Geth fleet.

Does this new image’s crater show the ruins of a now-extinct race, or will the Geth somehow have survived the Crucible’s blast? If much-loved robo-pal companion Legion had a soul, could it have been saved from disaster? And what about poor EDI? We don’t have the answers just yet, but it’s certainly fun to speculate.

A recurring theme within fan theories for an upcoming Mass Effect game is the unification of the main Mass Effect and Andromeda storylines. With its buggy launch and slow buildup, Andromeda may have earned the reputation of series black sheep, but that hasn’t stopped it from garnering its own dedicated fan base. The development team appears to have made it clear that Andromeda won’t be pushed into a corner.

The ship in the new poster shares a similar (albeit chunkier) design to that of Andromeda’s Tempest, leading to renewed theories that the two worlds will connect. Tying into the previous theory, some have also speculated that Andromeda’s mysterious Benefactor was actually a Geth collective, and that the sentient AI may have survived by escaping to another galaxy.

A storyline that spans across and even links both galaxies would appeal to Mass Effect fans of all stripes, though it has some heavy implications for the timeline. Andromeda takes place hundreds of years after the events of Mass Effect, meaning most of the cast wouldn’t be reappearing in any form. We’ve already seen Liara in the first teaser trailer, but given Asari can live for a thousand years, her presence is far from a guarantee of any other familiar faces. Krogan can certainly live a long time, but with the Genophage cured, what's stopped them from flooding the galaxy? If Andromeda is connected, it won’t be to the galaxy state that our Shepards fell in love with.

It’ll be set during Shepard’s resurrection in ME2

An alternate theory for the new Mass Effect’s time setting is that it’ll take place between the opening scene of Mass Effect 2 and Shepard’s eventual resurrection at the hands of Cerberus. We know Liara went looking for Shepard after their death, and that the Normany’s wreckage crashed upon an icy landscape, matching up with the snowbound first teaser. It’s also worth noting that the ship in this new image bears the marking “SFX”. This was the internal codename for the original Mass Effect, which could point to us jumping backwards within the timeline.

This setting would allow room to fill in what the original Mass Effect’s cast got up while Shepard was out for the count. However, it’s also the least exciting of all potential settings for a Mass Effect follow-up. Thrusting us back into a galaxy awaiting the Reaper invasion avoids any responsibility for figuring out what happens next. Then again, we’d almost certainly get to say hi to Garrus again...

So, what exactly happened to Shepard? If you picked Control or Synthesis, Shepard is likely gone for good. If you picked Destroy and had a good enough military rating, however, Shepard may yet be alive. It’s this ending that’s led many to assume that Liara is on the hunt for our courageous protagonist in that earlier teaser.

Unless you’re squinting enough to think one of the bodies in the new poster is Shepard, there’s not much new to discuss here. But should the Mass Effect series really be tied inextricably to Shepard? It’s proven a contentious point within the game’s fanbase ever since the 2020 teaser trailer, and not much has changed with the release of this new image. With such a diverse universe out there to explore, Why not give new characters a chance to shine? Speaking of which…

We’ll get to play as a different species

Maybe, just maybe, a new Mass Effect will let us pick a non-human race to play as. Is there any evidence to back this theory up? Not right now, no. It may be just wishful thinking for the time being, but we know BioWare has experience on this front through the Dragon Age series.

Mass Effect has a wealth of humanoid species to pick from, and we’ve even gone hands on with several already thanks to Mass Effect 3’s multiplayer. It’s probably just a pipe dream, but we’d love to learn more about the Drell or bully our enemies as a Krogan bruiser. Fans are already keen for the idea, so here’s hoping the next Mass Effect surprises us all.

And finally, speculation aside, let’s take a closer look at that new poster. The Geth resemblance is plain to see, but what else is the image hiding? We’ve spotted three bodies lying in the ground around the crater, which itself appears to contain a bubbling liquid or some kind.

Shifting perspective to the approaching krew, four figures are visible. One of which is distinctly Krogan, while the other two aren’t so easily distinguishable. The initial teaser includes what looks like a Salarian companion, which could be one of the figures here, while the last could easily be human, Asari, or Turian.

More interesting, perhaps, is that some fans seem to think the companions are wearing outfits very similar to those involved in the Andromeda Initiative. Further proof that Andromeda will tie-in directly? Your guess is as good as ours.

Let us know your own Mass Effect fan theories in the comments below! After all, we’ll likely need plenty to discuss until we find out more about the future of the Mass Effect universe. If only we had something else to fill the void...