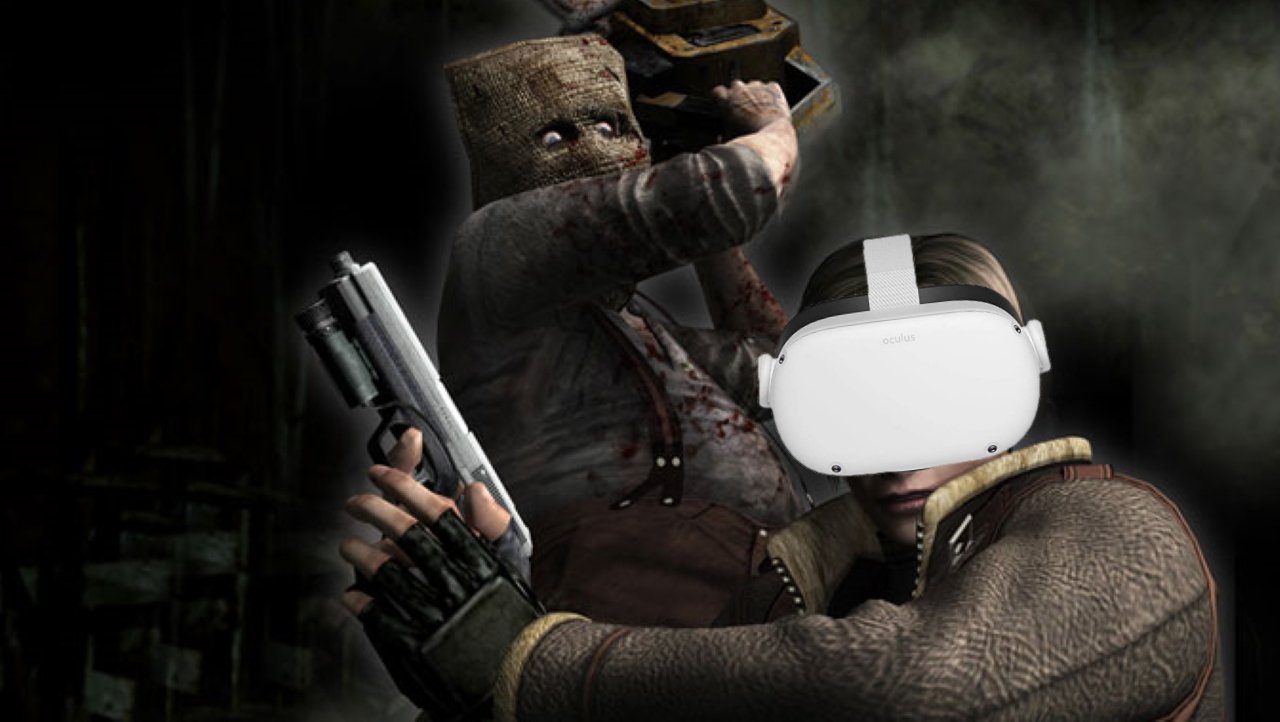 Revisiting the place you grew up doesn’t usually involve shotguns, zombies, and an undersized Napoleon wannabe. Then again, Resident Evil 4 always was better than real life. When Leon Kennedy first dropped quips and Ganados on our GameCubes back in 2004, its head-shattering shotgun blasts and lethal chainsaw chases terrified and wowed in equal measure. That opening village segment alone was enough to implant the Las Plagas firmly within our memory banks.

Playing it today, however, RE4’s era-of-brown-video-games visuals are hard to overlook. It’s still a corker of a game, but Leon’s luscious locks have come a long way since. Shifted to gaming's most immersive interactive medium, has agent Kennedy still got what it takes? Thanks to Armature Studio's stellar port work, Capcom's survival horror classic is everything we remember and more.

If you’ve never played Resi 4 before, the VR version can come across as restrictive in many ways. This is no Half Life: Alyx – few items can be grabbed or played with, physics interactions are limited, and there’s no hiding the brown smears of environment textures when you shove your face right up into them. Trying to use 3D initiative to duck under that tripwire? RE4 VR will slap your insolent attitude down in explosive style. If Leon couldn’t get away with it in 2D, there’s a good chance your VR incarnation won’t be able to either.

In some ways, Resident Evil 4 VR could easily be described as slavishly faithful, but for returning Resi 4 obsessives? It’s nothing short of glorious. We’ve gunned through the village and beyond enough times to recant Leon’s lousy one-liners in our sleep, and in VR, everything works precisely as we remember it from those sessions long past. Only this time, we’re stepping directly into the screen.

The result is a bizarre blend of nostalgia and novelty. Each environment, from the run-down village to the sinister, cult-filled castle, feels like a playground built from your gaming memories. The outdated visuals – touched up just enough for VR to look like you remember them – will never trick your brain into thinking you’re actually exploring an infection-ravaged village. Instead, you’re left with an arcadey romp through familiar locales.

Remember abusing enemy AI to stab foes endlessly on a ladder? Relive it in VR! Miss sniping castle cultist heads through their flimsy wooden shields? You can hold the rifle yourself!  It’s like a renaissance fair for Resident Evil gamers, only you’ve actually experienced the past you’re reminiscing about. Dressing up as Leon Kennedy is just an added bonus.

Not everything has stayed the same, however. Plenty of puzzles have been reworked to let Leon go hands on with the components, and boss fights like the infamous lake monster require a hands on approach – provided your stomach can handle it. You’ll likely spend half the time each session just admiring the details on items and ammo that previously sat sterile in your inventory. We’d dare anyone to grab a large sea bass in VR and not attempt to give its giant face a kiss (just us?). The already entertaining inventory now requires hands-on organization, and in a brilliant touch, you can even manually type your save file entries on the game's typewriters.

VR is the ultimate form of gaming. A statement that rings true more than ever thanks to Resi 4!  #ResidentEvil4VR pic.twitter.com/EYUOZHmNbQ

Treasure hunting, too, takes on a new life in VR. Commanding Leon in third person, we ingrained a habit to scan the ceilings as we progressed, but how often do you actually look up at the roof in real life? Casually glancing around to see the glint of a hidden spinel above offers a genuine surprise in RE4 VR, even when we’re pretty sure that we’ve close to memorized each and every location. It helps, of course, that you can pretend to wear each trinket you liked a masked ball attendee with far too many shotguns.

The key is that these adjustments are only a garnish atop a meal that was already feast. It would have been easy to tweak too much for a VR port, leaving the entire experience worse as a result. Resident Evil 4 balances the act perfectly for returning players – this is a game that knows just how brilliant it is. And for Resident Evil 4 lovers, the VR version may be the best version yet.

Resident Evil 4 VR is available now for the Oculus Quest 2. Check out our hub page for the game for more coverage.