Resident Evil: The Board Game will let minis loose in the Spencer mansion

Could S.T.A.R.S. survive a night on your tabletop? 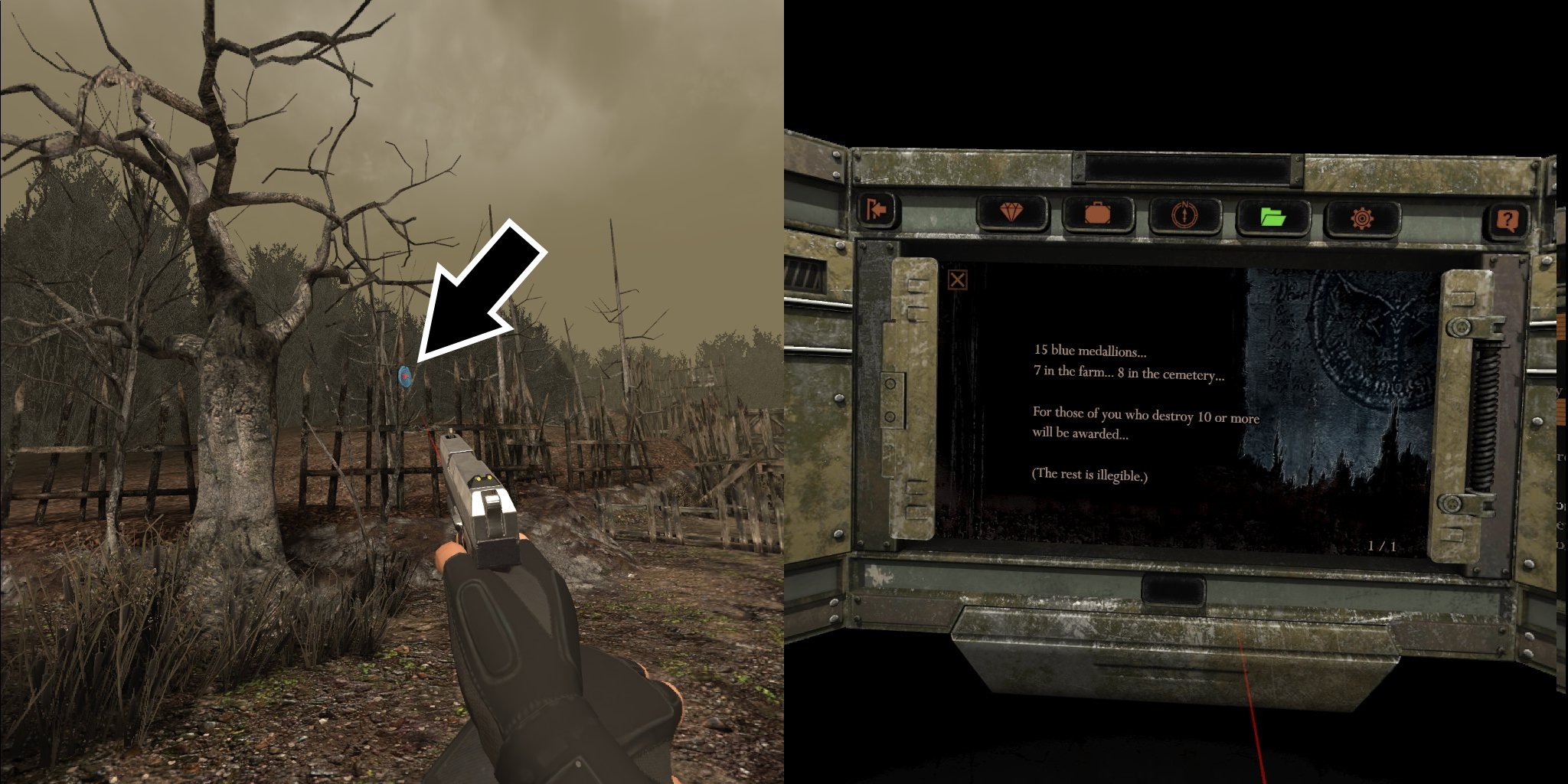 Whether you’ve played it before or not, Resident Evil 4’s VR outing includes several puzzles to work through, none more tempting than the Blue Medallion challenge encountered early in the Village and Cemetary. Shoot down ten and you can earn a new weapon, so we’ve put together a quick guide on the Resident Evil 4 VR Blue Medallion locations for you to cast your eyes over.

As the note under the first medallion will tell you, there are seven medallions in the farm and eight in the cemetery. You need only shoot ten to get the reward, but we’ll take you through the locations for all of them below. In an interesting move, Resident Evil 4 VR seems to mark the locations on the map with blue dots after you’ve found a few, making the job all that much easier.

We’ll start with the Village Blue Medallions you can grab first.

This Medallion is hanging on the tree behind the fence as you enter the farmhouse area beyond the main village.

Turning to the left from the first Medallion, you can see the next Blue Medallion location in the upper window of the large barn in the center of the area.

Head through the large barn to the lot with the cows and chickens in and look at this tree near the shed at the back. There’s a medallion hanging from its branches on the right.

Heading turning back and heading toward the main house, there’s a medallion visible in the top window as you approach from the farm side.

Enter the house and climb the ladder, then climb through the window on the side to reach a wooden platform. As you walk along it, look at the windmill on your right. There’s a Blue Medallion location hanging close on its side.

From the same platform, look toward the locked door in the section ahead. There’s a medallion hanging among the wooden barricades on the upper levels.

Next we have the eight Cemetery Blue Medallions. Most of these are grouped together in the main cemetery, but some require you to head onto the wooden walkways beyond the church.

The first cemetery Blue Medallion in Resident Evil 4 VR can be found by sticking to the right side as you enter the area. Just past the small shed with a Ganados in, the Medallion should be hanging from a tree outside the map bounds.

Turn in toward the actual cemetery and there should be a tree close to you on the side of the fence closer to the graves. The medallion is hanging from its branches.

For the next Blue Medallion location, head to the opposite side of the cemetery. There’s a tree hanging by the graves toward the back which has a medallion.

Next, head up to the church entrance and look to the left of the main door. The Blue Medallion is hanging on a tree back and behind the doorway.

For the last three Blue Medallion locations in Resident Evil 4 VR, you need to head down the path beyond the church. On the first part of the wooden walkway, look below your feet as you approach the gap to jump over. The Blue Medallion is hanging under the walkway.

The next Blue Medallion is just ahead of the last, this time hanging above the center of the pathway.

The final Blue Medallion is hanging from the underside of the wooden walkway a short distance ahead of the previous one. You should be able to see it from the same location.

Those were all the Resident Evil 4 VR Blue Medallion locations. Head back to the Merchant and you can claim a special pistol that pierces through enemy targets!