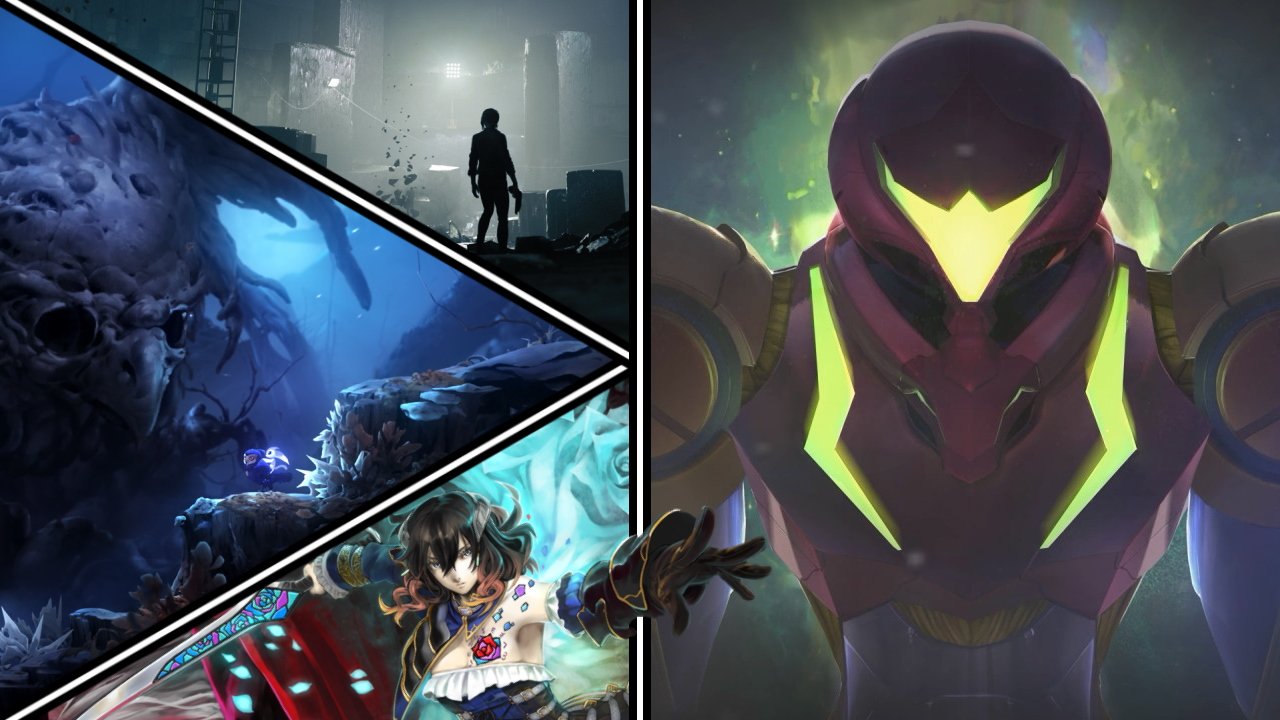 Samus' resume would likely read something along the lines of "Self-motivated, capable of hours of independent work, and resistant to the X Parasite. My greatest weakness? A tendency to lose all my powers any time I visit a new planet." In other words, she's uniquely skilled. That hasn't stopped plenty of other games from trying mimic her adventures, however. If you've just wrapped up Samus' latest stellar journey, You might be wondering what games like Metroid Dread should be your next Metroidvania mission.

While Samus enjoys a well-earned holiday break, we've picked out five superb games like Metroid Dread for you enjoy. Each of the titles below share many core aspects with the recent Metroid outing but also brings something new to the format. And while many classic medtroidvania games are well worth returning to, we've limited our selection to more recent releases that are still easy to obtain.

What would any list of modern Metroidvania games be without Hollow Knight? Rubbish, that’s what. Team Cherry’s masterpiece may have been released four years ago, but there really hasn’t been anything to match it since. Though that may largely be because Switch-exclusive sequel Silksong stubbornly refuses to show its carapace in any of Nintendo’s Directs thus far.

Chances are, fans of the Metroidvania genre will have already explored the atmospheric depths of Hallownest. But if you haven’t? Oh boy are you in for a treat. Hollow Knight is a rare gem, in that it delivers on all fronts; mechanics, combat, and the world lock together into an intricate puzzle that’s a delight to tinker with as you wander hallways, tackle bosses, and amass an expanding arsenal of powers.

The biggest disclaimer we have to preface any purchase suggestion with is that this is a seriously challenging game. But then, if you’ve carved a power beam sized hole through Metroid Dread’s bosses, you’ll certainly be ready for the fight. There are also plenty of bugs. But in this case, that’s a good thing. If you’re a Metroid fan who hasn’t experienced Hollow Knight, make it your first stop. And if you’ve already played it? Well, another run will fill some of the time we need to wait until Silksong eventually arrives.

The only thing better than one of the best Metroidvania games out there? Two of them in a single package. Ori: The Collection folds both 2015’s Ori and the Blind Forest and 2020 sequel, Ori and the Will of the Wisps, into a staggeringly impressive package of 2D exploration and wholehearted emotion.

The original puts the essence of exploration above everything else. Simplistic combat means platforming takes center stage, allowing players to bound their way through a gorgeous world without nails-hard boss fights popping up to deliver an admittedly beautiful gut punch all that often. Don’t let that fool you into thinking there’s no challenge, though.

The sequel retains the same stunning visual palette and impressive soundtrack, but expands the action to involve increasingly complex combat maneuvers. You’ll also be interacting with far more characters as you get to know the denizens of the world and expand a central village.

If the teasing drips of storyline in Metroid Dread had you desperate for more, Ori: The Collection will slake your thirst and then some. In fact, you’ll likely wonder why you can’t seem to stop water from bubbling up beneath your eyes. Pack some tissues for this journey.

In addition to sprawling maps and myriad bosses hiding powerups, Metroidvanias are often known for their difficulty, too. But if you’re after a gentler ingress to the genre – whether to recommend it to a friend or for personal relaxation – Owlboy is a brilliant choice. This story-heavy adventure keeps the core systems you’d expect, but trims them down to fit an easier-to-navigate tale.

In a creative take on combat and capabilities, our feathered lead isn’t good for much beyond flapping around and picking things up. In order to successfully navigate the characterful open world, he must carry companions to do the fighting – and talking – for him. In Owl Boy, your weapons are tied directly to the lively (and often chatty) characters you’ll meet along the way. Hoist your blaster-toting pal Geddy into the air, for example, and Owl Boy effectively becomes a twin-stick shooter. As such, it should come as no surprise that the narrative is a core focus here, with much of the game and world locked behind story progression.

If you aren’t an utter purist, Owlboy tucks plenty to enjoy under the wings of a breezier interpretation of the Metroidvania template. Entertaining characters and animations, along with another superb soundtrack, make this story of strength and bravery in collaboration well worth soaring through.

Let’s throw an extra dimension into the mix, shall we? And we promise, that won’t be the strangest thing you’ll encounter in Control. You see, the Oldest House is a home for all things unusual. Part bureau for the bizarre, part prison-chamber for paranormal pests, this impossible building has been overrun by a malicious presence known as the Hiss. As the new director, it’s your job to sort everything out.

Control’s third-person shooting is certainly meaty enough, but it's the supernatural powers that’ll really sell you on the action. We won’t spoil the bulk of the bunch, but it doesn’t take long for protagonist Jesse Faden to unlock a kinetic toss that’ll set anything, even a chunk of the scenery, careering into the dome of some unfortunate infected soul.

But why’s this good for Metroid fans? Well, in many ways, the Oldest House is a maze you’ll need to map and navigate in your mind. You’ll encounter areas held tantalizingly out of reach until that right power comes along. Much like Samus, Jesse Faden will also begin to feel unfathomably powerful as you unleash all her tools in the latter stages of the game. Even if those powers are just put to use tracking down a wayward rubber duck. Trust us, it’s more challenging than it sounds. It's also worth noting that if you thought Metroid Dread's presentation was slick, Control is one of the most stylish games of the last five years.

Control’s Ultimate Edition packages in all the major DLC released, including a direct link to the recently remastered Alan Wake. If you’re a fan of unsettling mystery mixed with Metroid structure, add some Control to your life.

Bloodstained: Ritual of the Night

Available on: PS4, Xbox One, PC, Stadia, Switch (though we wouldn’t advise it)

We’re Metroid stans first and foremost, but that vania tag dangling on the genre end is hard to deny. Especially when 2019’s Bloodstained: Ritual of the Night marked the return of Koji Igarashi, the former series producer for Castlevania. Turns out, he knows what he’s doing, too.

The setup for this one is a classic: There’s a big bad demon lurking in an 18th century vampiric castle. You’d better stop him or he’ll unleash terrors across the continent. Bloodstained’s best selling point is in its powers and weapons. As a shardbearer, the dramatically dressed Miriam is capable of absorbing the essence of her enemies. That means most foes in the game also offer a brand new power to unlock should you best them enough times. There are a wealth of weapon choices too, each with their own combos and techniques to master. It’s an immensely customizable and satisfying experience that’ll let you dish out damage to demons in your own fashion.

The bad news is that the Switch version was released in a dire state and, to our knowledge, the performance hasn’t improved much since. If you’re looking to grab this gem, get it on PC, Xbox, or PlayStation.

Enjoyed any other masterful Metroidvania games recently? We’d love to hear about them in the comments below.