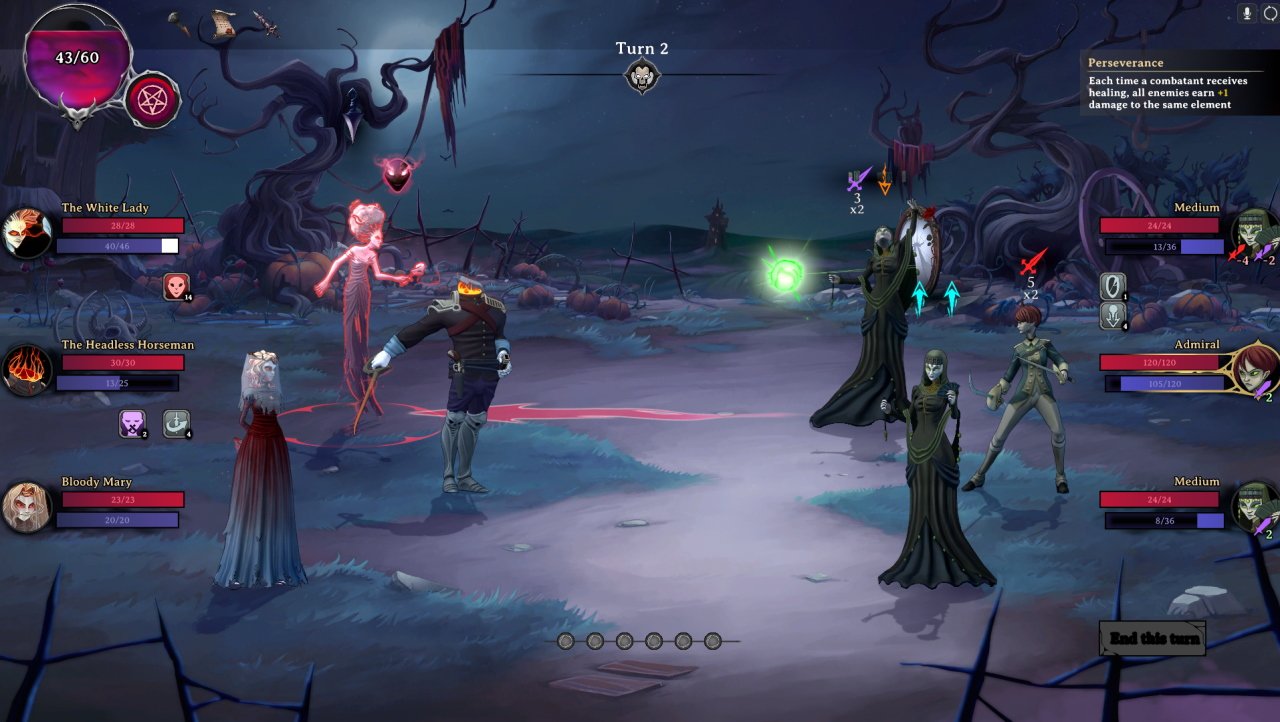 Normally, we’d frown at cheating in a video game. Then again, a dour expression was never going to put off the lord of the underworld, was it? Especially not when breaking the rules offers such a wealth of opportunities.

Rogue Lords is a turn-based strategy roguelike that places you in charge of the Devil’s bag of tricks. That includes not just minions like Dracula and Bloody Mary, but also the ability to twist reality altogether. After suffering a humiliating defeat at the hand of Van Helsing’s band of hunters, Hell’s head honcho has been stewing in the depths, gestating a new wave of power for a fresh attempt at conquest.

The forces of evil aren’t what they once were, however, and humans have been living it large while you’ve been gone. That means it’s time to gather the Devil’s last loyal minions to venture forth and sow terror on the surface once again.

There’s little avoiding the comparisons to Slay the Spire, as Rogue Lords is unashamedly cut from the cloth (albeit a far bloody variety). Your coterie of three villains will wind their way through a branching map of encounters that include fights, multiple-choice events, and shop stalls – the Devil buys his goods from the Grim Reaper, in case you were wondering. The aim? To best the big bad – from your perspective, anyway – waiting at the end.

There may be no decks to digitally shuffle here, but a raft of abilities that require “refreshing” between each use will feel closer to cards than you might first expect. Fights still demand careful consideration over how best to apply the limited action points available per turn. Should you emphasize damage, or expend a turn refreshing powers and applying buffs and modifiers? Devilish decisions lurk around every corner. So if it wasn't clear already, Slay the Spire and Monster Train expats will feel right at home with Rogue Lords. But as anyone dancing with the Devil should know, there’s always a catch.

Rogue Lords’ biggest divergence comes in its Devil Mode. As the lord of all evil, you need only pay partial attention to the rules of reality. The click of a button means health bars, status effects, and even the odds of success at any given task are yours to manipulate. Provided, that is, you’ve got the essence to expend. While your minions will replenish their health at the end of each fight, your supply of cheating juice is far more limited. Replenishing your stores demands a stop at the river Styx on the overarching map.

Combat is satisfying enough alone that, for the first few hours at least, you’ll probably forget about Devil Mode altogether. Then, when confronted with a foe that looks set to cut your run short, you’ll suddenly remember that, oh yes, you could just reduce their lifebar to zero. From there on, a well of fiendish opportunity bubbles into life; tweak a lifebar here, refresh an ability there, or shift an opponent’s buff to your team, and the results of even a single round can vary drastically.

Where Rogue Lords really gets interesting is in the ways that its standard combat rules play around your essence. Your minions feature two health bars, one for physical damage, the other for spiritual. Should either run out, it isn’t game over. Attacks that would kill them will instead begin to drain your demonic essence. Expend it all and your run is finished.

Some characters, like Dracula, thrive in this state. Push his health to the limit and suddenly attacks will deal double damage, turning the literal monster into a figurative one. In any other game, this would be a last ditch desperation, but here you can manipulate the arena enough to make it a core part of your strategy. In this manner, Rogue Lords tempts you into playing at the very limits of your powers. Runs are defined not just by obtaining the perfect combination of abilities, but how well you mesh them with your infernal tampering.

Rogue Lords doesn’t escape the depths altogether, mind. There are certainly qualms to be had with the lengthy combat encounters, especially when slogging through early battles in a fresh run. Progression, too, is leisurely at best, with new characters hidden behind sluggish level ups or the conclusion of entire chapters. Interactive events signified by books on the map are the weakest link by far. These repeated encounters grow stale quickly, and the randomized responses of your party feel like arbitrary rewards or punishments.

Overall, it can’t quite reach the heights offered by Slay the Spire or Monster Train. But for those who’ve scaled that tower a thousand times and squeezed every last drop from the beastly locomotive’s fuel tank? Rogue Lords’ cauldron of demonic tricks is well worth reaching into to see how the satanic systems stir together.

Rogue Lords is available now on PC. It’s due to release on consoles in early 2022.