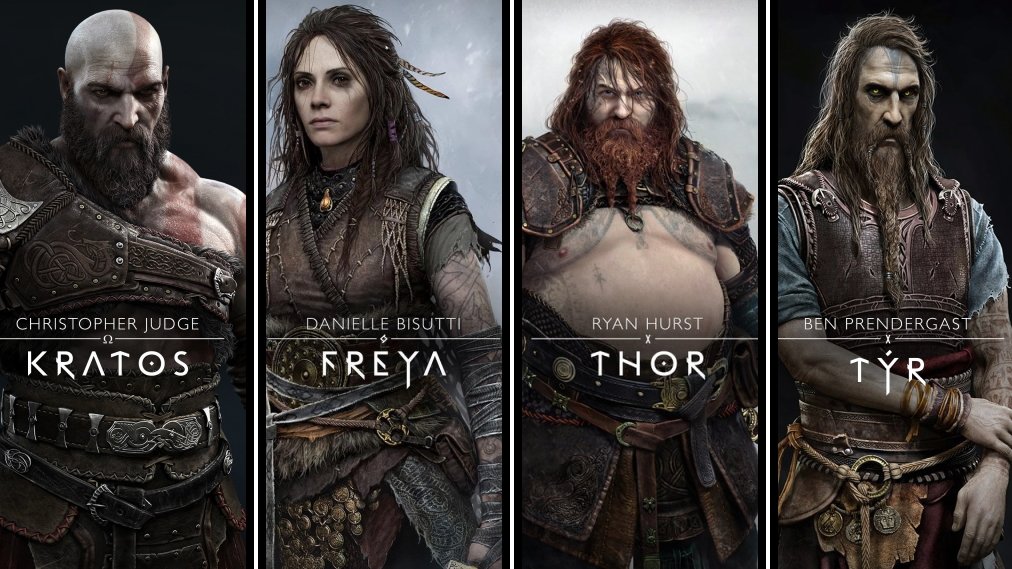 After finally pulling the weathered cloak off God of War Ragnarok during last night’s PlayStation Showcase, Santa Monica Studio have released character art and the cast details for the second stage of Kratos’ Norse journey.

First up we have the return of the big man himself, Kratos, though as we’ll see shortly, he’s far from the biggest man on this particular venture. Christopher Judge reprises his role as Kratos, so you can expect the same deeply resonant and somber tones to rumble from him once more.

Quite a bit of time has passed since the end of God of War, and Atreus has grown quite a bit since we last saw him. What’s stayed the same, however, is his voice actor: Sunny Suljic. He returns to provide the slightly older and more confident voice to the growing Greek-Norse hybrid god.

Another returning voice actor is Danielle Biscutti, who returns as the vengeful Freya. She’s still extremely unhappy with Kratos for taking down her son Baldur, and in Ragnarok will play the role of one of the main antagonists.

The other main villain? Well that’d be this guy. After Kratos offed Magni and Modi in 2018’s title, it was only going to be so long before big papa Thor came calling. And boy is he big. In the truest form to Norse mythology that video games have yet seen him, Thor is an immense man who’ll be voiced by Ryan Hurst (Sons of Anarchy, The Walking Dead).

Another new face we’ve yet to learn much about is Angrboda, a young giant and one of the last of her kind. In Norse mythology she’s usually depicted as Loki’s lover, and the mother of creatures such as Jormungandr, the World Serpent, and Fenrir, the mighty wolf. It’ll be interesting to see how God of War Ragnarok marks her connection to Atreus over the course of the game. Angrboda will be voiced by Laya DeLeon Hayes.

We also got a look at Tyr in the new trailer. Mentioned and hinted to often in the 2018 title, the towering – he’s 8’ 5! Take that Lady Dimitrescu –  Norse god of war could well be an ally of Kratos and Atreus, though he looks far from friendly during their meeting in the trailer. Tyr will be voiced by Ben Prendergast.

Another new character in God of War Ragnarok is Durlin, a dwarf with a far more scholarly look than the two we spent time with in our first stay in the nine realms. Durlin will be voiced by Usman Ally.

We also had the return of blacksmiths Brok and Sindri, who’ll be voiced by Robert Craighead and Adam J. Harrington, respectively. Hopefully they stay friends this time.

I voice and provide the motion capture for Ratatoskr in GOD OF WAR RAGNAROK, and in addition, I was also hired by @SonySantaMonica to work directly with the writers to help write his scenes, thank you to everyone there for the opportunity pic.twitter.com/DOKucQkdQo

And finally, SungWon "ProZD" Cho will be voicing (and mocapping) Ratatoskr, a squirrel which in Norse mythology scales the world tree Yggdrasil to carry messages between the eagle atop it and the serpent Nidhogg which dwells at its roots. It appears that in Ragnarok he might stop to have a chat with Kratos and Atreus while scurrying to and fro.

That’s all the cast and characters we’ve been shown so far for God of War Ragnarok. Which is your favorite? Let us know in the comments down below. And while you wait for Ragnarok’s distant release, why not check out the rest of the trailers from the PlayStation Showcase?