The Dead Space remake is a long way off, but it's already looking scarily good

The first developer livestream for the Dead Space remake has us eager to dock (and die) on the Ishimura once more. 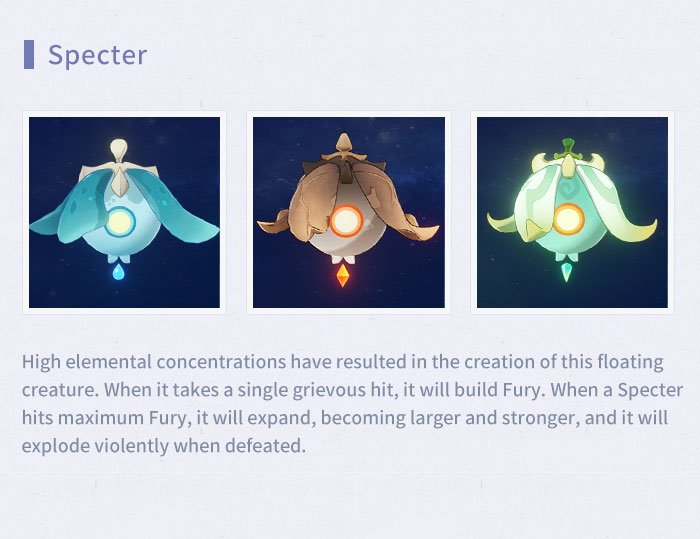 Get the scoop on Valorant's upcoming map.

Genshin Impact's latest region, Inazuma, now has two new islands for players to explore thanks to the 2.1 update. These islands are called Watatsumi Island and Seirai Island, and they feature plenty of brand new shrines, gameplay mechanics (like fishing), and enemies, like Specters. Here's everything you need to know about these elemental enemies, and where to find them.

Specters in Genshin Impact are creatures that manifest in areas with high elemental concentrations. If they take "one grievous hit, it will build Fury," according to the Inazuma Diaries post. "When a Specter hits maximum Fury, it will expand, becoming larger and stronger, and it will explode violently when defeated."

Like Genshin Impact's slimes, Specters are immune to the elements they correspond to, though they don't use those elements offensively. There are three kinds currently: Anemo Specters, Geo Specters, and Hydro Specters. As for the rewards you can expect from them, Specters currently drop Spectral Husk (level 1+), Spectral Heart (level 40+), and Spectral Nucleus (level 60+). They can be found on both of the Inazuma region's new islands.

Seirai Island is made up of a crescent shaped center island, with smaller land masses surrounding it in more of a standard ring, as opposed to Watatsumi's spiral. The specters here largely seem to hang out on these external islands, leaving the crescent island mostly barren. Explore the outer islands to find Specters and harvest their drops.

For more precise locations on these new elemental enemies, check out this interactive map!