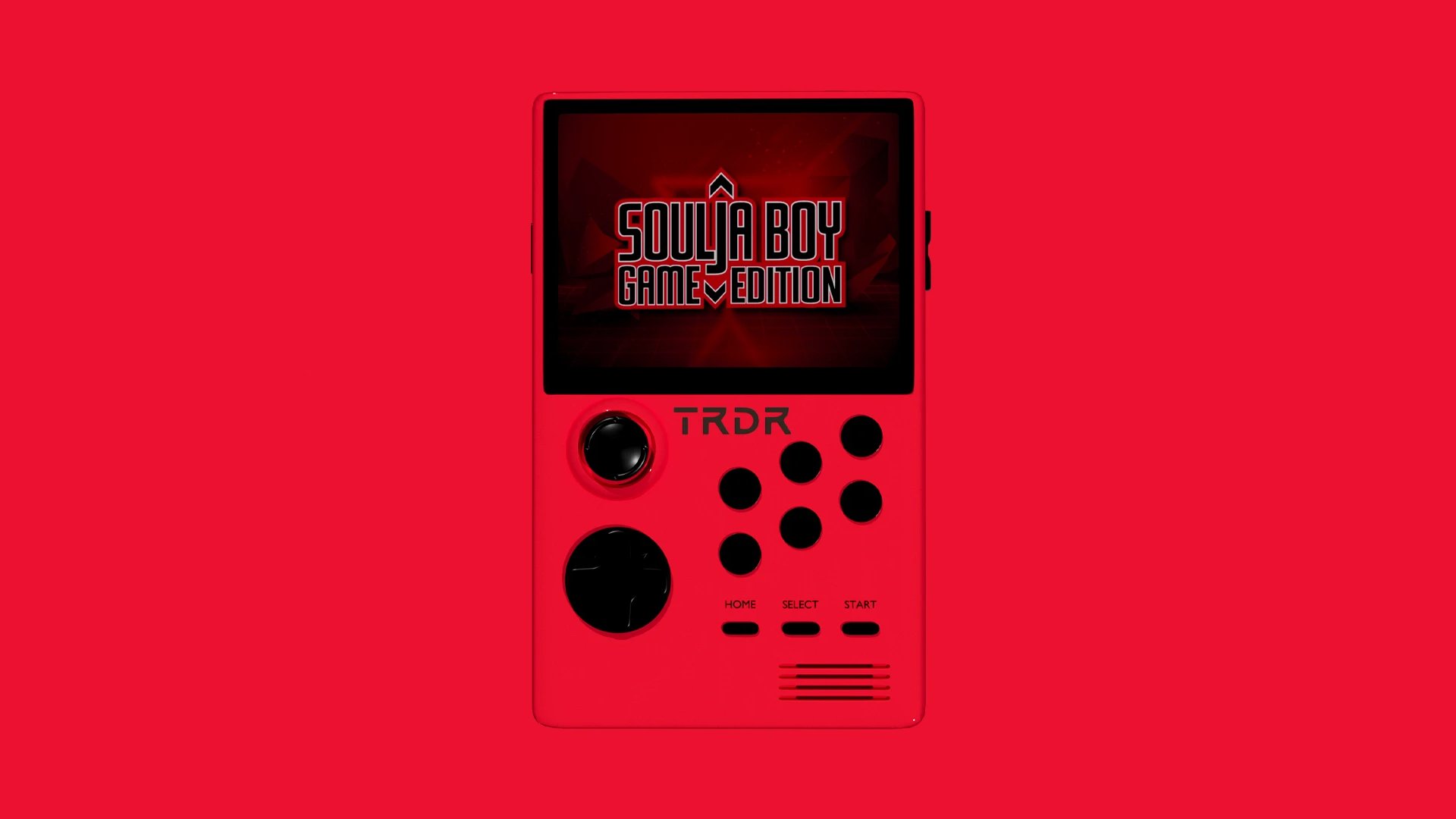 Mid-noughties rapper Soulja Boy is making yet another attempt to break into the games console manufacturing industry by attaching his name to a marked up Android-based retro handheld. And he hates the bad reviews it's getting.

The TRDR Pocket now comes in Fireball Red for its Soulja Boy Edition, which will set you back $300 and promise to play "the latest adventure, RPG and sports games" and apps like Netflix, Spotify and Apple Music on its Android OS via a 3.5-inch touchscreen.

The problem is, according to UK-based Youtubers who were sent the handheld to preview, that isn't a touchscreen, and the rest of those promises aren't standing up to much either. Also you can probably buy exactly the same thing on AliExpress for $75.

British Youtuber Sunpi posted a review of the TRDR Pocket Soulja Boy Edition, which isn't exactly glowing, and prompted the American rapper to claim he hadn't sent her anything (and swear at her, naturally).

Of course, this is technically true, as in her explanation video of the encounter, Sunpi shows her review was arranged through Instagram DMs with the founder of the brand behind the handheld, TRDR, namely Gianni O'Connor.

Mr O'Connor isn't a game developer or hardware manufacturer by trade, but he did start up an app called Trad3r which allows you to buy stock in people and brands with real money and play a simulated stock market with them. It has a very "healthy" looking review section on the Apple App Store.

The Trad3r app (the logo for which is emblazoned on the TRDR Pocket) is developed by a company in the UK called Aerosax Research & Technology Ltd, headed up by Gianni O'Connor, and the recipient of $2 million of seed funding from big name investors, including Brian Chadwick, who was involved in the sale of online gaming site Miniclip to Tencent in 2015.

O'Connor then supposedly spent $1 million on a TV show about his own life to be filmed for Amazon Prime direct delivery in Barcelona, but we can't find anything else about that. Anyway, back to this handheld games console.

Trad3r's developer is the company through which TRDR Pocket's Shopify page is set up, as evidenced by its contact email, though it is somewhat muddied by references to a Spanish company called Go Games Ltd, established as a second office of Trad3r in Barcelona at the start of 2020.

Soulja Boy (@souljaboy) announces he is the new owner of Atari and is going to sell his gaming company for $140M. pic.twitter.com/DKg3Ni3XVr

Regardless, it does not appear that either of these companies are doing much R&D in the manufacture of the handheld, despite Soulja Boy's claims that he was going to do it right this time and "make it from scratch" after his previous blunders into games manufacturing. Just last week he claimed to own legendary gaming brand Atari, after seemingly being gifted the company's cryptocurrency token in return for publicity and mistakenly believing they were shares giving him some sort of ownership stake.

Soulja Boy's flirtations with the games industry began in 2009 when he posted a viral video of himself laughing for a disproportionate amount of time at the rewinding mechanic in Jonathan Blow's Braid – which in turn pissed off Jonathan Blow because his platforming indie game was supposed to be high art.

Since then he has periodically been releasing "his own" "consoles", such as in 2018 when he dropped both a handheld and suspiciously Xbox One-shaped console on his watch dropshipping store, which claimed to support PS1, Arcade, GBA, and NES games. Through emulation of unlicensed ROMs, of course.

Those devices were actually just rebranded versions of consoles made by Chinese emulation machine kingpins Anbernic, which were you to buy them through Chinese Amazon-equivalent AliExpress would have cost between $60 and $90. Soulja was selling them for $100-150.

Then he tried to add a GameBoy clone to the mix, which apparently prompted Nintendo's lawyers to send a cease and desist. After pulling the consoles and redirecting his store page to Nintendo's 3DS landing page, Soulja Boy sorrowfully tweeted:

I had to boss up, I didn’t have a choice.

Though not explicitly angering Nintendo this time, the TRDR Pocket appears to be either an exact match for a different device available on AliExpress called the Retroid Pocket, or a close derivation of it using identical outer casing. Strangely the Retroid Pocket does not claim to have a touchscreen like the TRDR Pocket does. In recent Instagram posts, O'Connor shows his TRDR Pocket's touchscreen functioning, so perhaps there is a difference between the models these Youtubers were shipped and what was originally intended to be sold.

The Retroid Pocket is, itself, just a refit of another cheap emulator, the Powkiddy A19, and even if the TRDR Pocket is using updated innards (difficult to tell given the lack of concrete specs on offer) the design is essentially the same. Shell casings bought in bulk from China with an Android OS-capable ARM chip for running emulators on. Not quite "doing it from scratch" by any stretch of the meaning.

If you were to purchase the almost identical Retroid Pocket from AliExpress, it would cost you roughly a quarter of what Soulja Boy's name adds to the TRDR Pocket. The only question you need to ask yourself is: is his prestigious reputation in gaming hardware worth that premium?

the soulja game is soulja #BUSSIN!!!

pick one up at your local electronics store today!! pic.twitter.com/7ZZnGE6EPa

Ah well, doesn't look like anybody will ever be able to stop him releasing new consoles anyway.