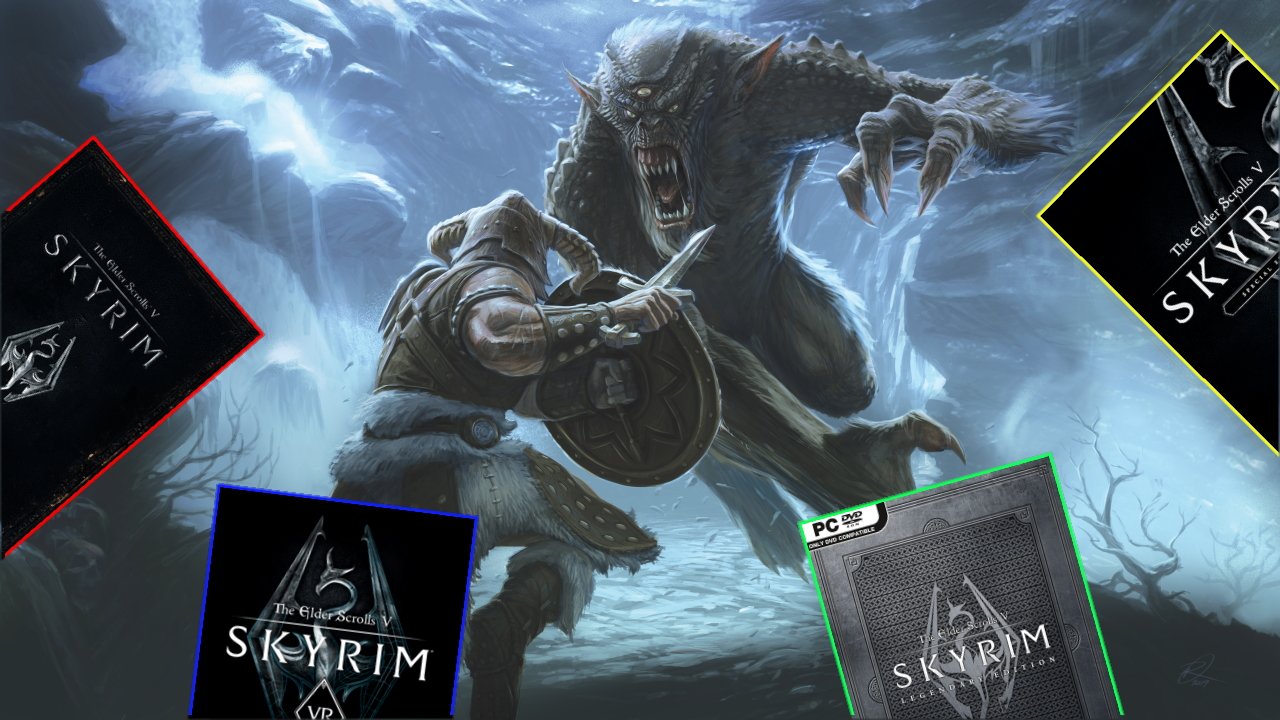 Every Skyrim edition released over the last decade

Age hits us all differently, but Skyrim is getting an outrageously good deal. A decade of life for most video games marks time to set expectations for a remake or even a nostalgia-driven DLC pack.

Not so for this frosty open world, which seems content to continue releasing itself in perpetuity, presumably until the heat death of the universe removes any potential new platforms. At that point we can only assume the game will make the jump to alternate dimensions. Skyrim, you can be sure, will outlast us all.

So as we prepare to board the axeman’s cart one more time in The Elder Scrolls V: Skyrim – Anniversary Edition, let’s take quick look back at every version of Skyrim released since those snow-capped peaks first graced our screens in 2011.

Hey, you. You’re finally awake. Oh Ralof, if only you knew the history those words would spawn. The original Skyrim released two console generations ago, offering us a chilly world of dragons to slay, people to Fus-Ro-Dah off mountains, and burdens sworn to be carried. While PC was living it large, the PS3 version ran notoriously poorly. Fortunately, a new console generation was only a few years away – merely a blip in Skyrim’s planned millenia lifecycle.

The impressively named Legendary Edition arrived two years later and packed in the three core expansions: Dawnguard, Hearthfire, and Dragonborn. At this point, you might reasonably have assumed that Skyrim had run its course, ready to be replaced by a new title on the next console generation. My sweet summer child.

While the visual boosts were more than welcome for PS4 and Xbox One owners who’d yet to find themselves awakening to a chilly death sentence in Helgen, the PC release was deemed rather pointless. Mods had long advanced PC Skyrim’s visuals beyond its console brethren, and a new version simply meant redownloading a host of updates to ensure everything was running smoothly.

Okay, so Skyrim Pinball was technically just one board within Bethesda Pinball (or Zen Pinball/Pinball FX on certain platforms), but it was a bizarrely involved affair. Attempting to replicate the opening to the main game, Skyrim Pinball challenged you to hit certain areas to equip weapons or armor, obtain gold, and slay monsters. Developer Bethesda clearly had big plans for the Skyrim gaming universe at this point, while the rest of us were waiting for even a whiff of a followup. At this point we’re expecting a Skyrim box to turn up in Super Smash Bros. and start laying the beat down on Mario.

A new trailer arrives, sending us soaring through the stars to rest on a fallen helmet in the snow. Dare we hope for a new Elder Scrolls game on the horizon or perhaps even some new DLC content? Nope, sorry, it was just a Skyrim-themed expansion to collectable card game The Elder Scroll: Legends. Legends was, by all accounts, a solid card game, but you could already see the twitch of frustration in the eyebrows of longtime series fans.

With the Nintendo Switch loosed into the gaming wilds, it was only a matter of time before Skyrim clawed its scaly hide onto the hybrid console. In less than a year, Bethesda found yet another audience to bundle into the frozen nation. Surely, Skyrim had now conquered all the gaming lands available.

Aha! What if Skyrim stopped spreading itself outward, and brought you inwards instead. Skyrim VR was one of the early showcases for the PlayStation 4’s virtual reality headset. At long last you could admire the true scale of a giant as its club clonked down atop your dome. That’s if you could handle the nausea-inducing pace at which Elder Scrolls protagonists are capable of sprinting throughout the land, of course.

Just like Skyrim VR for the PlayStation, but with the added bonus of high-resolution grass textures and a million impractical armor sets to stare at.

Releasing Skyrim for the Amazon Alexa was a pretty amusing joke in self-awareness, but we’re pretty sure Bethesda only got away with it by finally acknowledging that yes, The Elder Scrolls VI was coming. When? Er, here – have this pretty title as a distraction!

And so here we sit, almost a decade on from Skyrim’s first release, waiting for Todd Howard to reach into our wallets once more. Along with the full suite of DLC, the Anniversary Edition promises to include more than 500 different Creation Club elements, including new quests, dungeons, bosses and more. As if in acknowledgement of this being the tenth time Skyrim has been hawked, there’s also a free next-gen console upgrade for the Special Edition on PS5 and Xbox Series X/S.

Here’s to ten years, Skyrim. As for The Elder Scrolls VI? We’re still waiting with the rest of you.