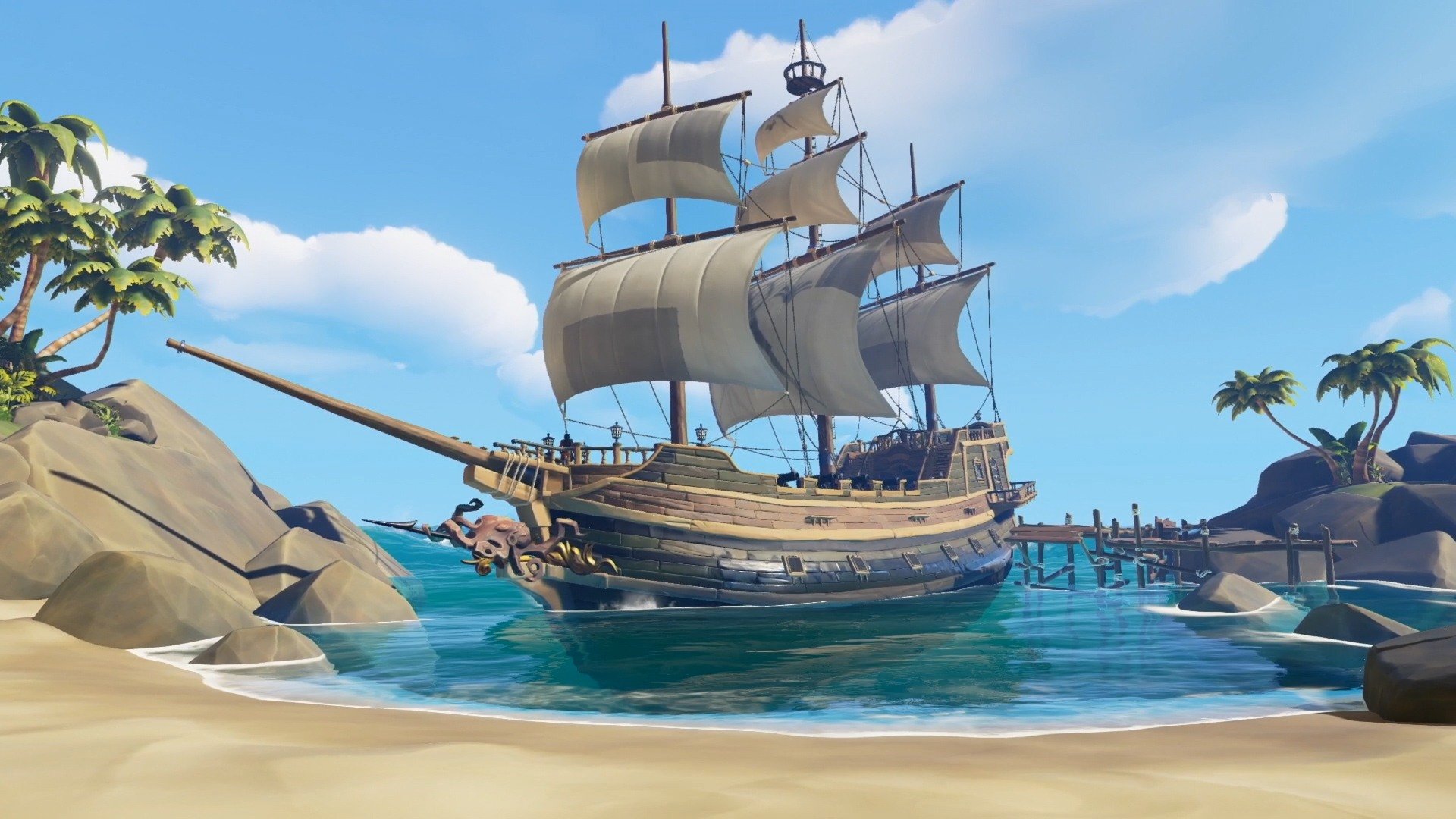 What's the deal with... Sea of Thieves?

Ever since being kids, many of us dreamed of being swashbuckling pirates at some stage. The Pirates of the Caribbean movies continue to draw audiences, becoming increasingly bizarre with each new instalment. In video games, too, the pirate life has become a much beloved theme, most famously in Guybrush Threepwood’s adventures on Monkey Island, later more seriously explored in Sid Meier’s Pirates and dramatically in the more recent Assassin’s Creed IV: Black Flag.

Sea of Thieves evokes the feelings from all of the above material, but uniquely invites us to buddy up with friends in a colorful and humorous online multiplayer world. There are elements of MMO-like community-oriented exploits popularized by games such as Destiny and Monster Hunter, but the very specific roles and responsibilities keep the game from becoming broader and less approachable in the manner of World of Warcraft.

Sea of Thieves releases March 20 exclusively for Xbox One and Windows PC.

Who is making Sea of Thieves?

Before exploring the specifics, a major factor as to why anyone would wish to set sail in Sea of Thieves is that it is crafted by Rare, the legendary studio behind Banjo Kazooie, Perfect Dark and Killer Instinct, with a sterling reputation reaching back to the 1980s. Judging by everything seen and experienced so far, Sea of Thieves bears the hallmarks of this great British developer, in particular the vibrant visual style and an infectious sense of fun.

What kind of game is Sea of Thieves?

Generally, Sea of Thieves is a Massively Multiplayer game that sets out to be friendlier than most. It’s a kind of enormous theme-park escape in which players are encouraged to abide by a pirate code of being courteous to others. Since one of the core requirements to success is sailing a ship, managed by a four-person crew, players have recognized that being a tyrant or glum and uncommunicative is likely to leave you stranded. Pirates are warmly encouraged to work together. Misbehave, and you could be thrown into the brig – entirely unsatisfying, from which the only way out is to apologize or just quit, unable to cause further mischief.

After creating a personalized avatar, the world is one huge opportunity to seek adventure. You are not limited by an experience level; welcome to assist anyone willing to have you on the team, which means that spoils from tougher and therefore most rewarding quests are potentially yours for the taking. Quests are handed out by faction leaders, similar to those commissioned by Vendors in Destiny, with objectives suited to their specific cause. They can be hunts for treasure or bounties placed on the heads of troublesome enemies.

Completing missions raises your standing with each faction, leading to increasingly more difficult and lucrative tasks, but you really can recruit absolutely anyone. Rare is taking quite a gamble by politely sneering at this grind-oriented MMO culture we’re now accustomed to. Arguably, though, it is much healthier. The Sea of Thieves being a pursuit that all friends can enjoy, without needing to toil alone for hours until being statistically capable of the task.

Can you play Sea of Thieves alone?

If you’d rather explore alone, some missions are possible to undertake without crew support. There are boats suited to individuals that feel confident in battle, capable of levelling a small army of skeletal warriors in order to claim that prize left hanging from the previous evening. While there are not the same drawbacks associated with unspectacular gear, the prospect of owning superior pistols and cutlasses remains a persuasive reason for investment of time. There is pleasure to be gained from combat prowess, built around a particular load-out that others will be jealous to see. That said, confrontations with tougher NPCs can require raid-like coordination with team mates. Also, you have rival ships to worry about. Like the Dark Zone in The Division, you could put in all the effort to acquire treasure, only to have it stolen! It’s doubtful that you’ll choose to be lonesome for very long.

Are there microtransactions in Sea of Thieves?

Sea of Thieves is among the first games added to Microsoft’s Game Pass subscription service while also being an Xbox Play Anywhere title (one purchase for Xbox One and Windows PC). While this means that potentially millions of fans can join the fun with fewer financial barriers for entry, the question hangs over how it will make money, and the answer is partly tied to micro-transactions. Rare has said that any such DLC will be more along the lines of cute pets – monkeys, parrots and cats – as opposed to expansion packs and gear. Again, not the structure we’re used to with Destiny, The Division and World of Warcraft – the promise is that everybody shares the same adventure, nobody gets to feel left out.

Ok, but what do you actually do in Sea of Thieves?

You may be concerned that Sea of Thieves is the most loosely structured online experience that ever existed, but this direction is quite deliberate. In a way, it’s a colossal social hang-out in which you may be just as happy to get virtually drunk in some no-name bar on a tiny island, as you would be embarking on a tense, and turbulent voyage. You could become a specialist in playing a musical instrument, capable of snake charming.

The intention is for emergent behavior and events to shape personal stories. With every ship being captained by a real person, the fun they seem to be having on the horizon is hoped to pique curiosity. You might stumble across a message in a bottle, and rally a crew to unravel its mystery. New events, story arcs and of course pirate treasures are to be added by Rare over time. Sea of Thieves is to become a world that hardly ever stands still, and there’s always reason to come back and explore.