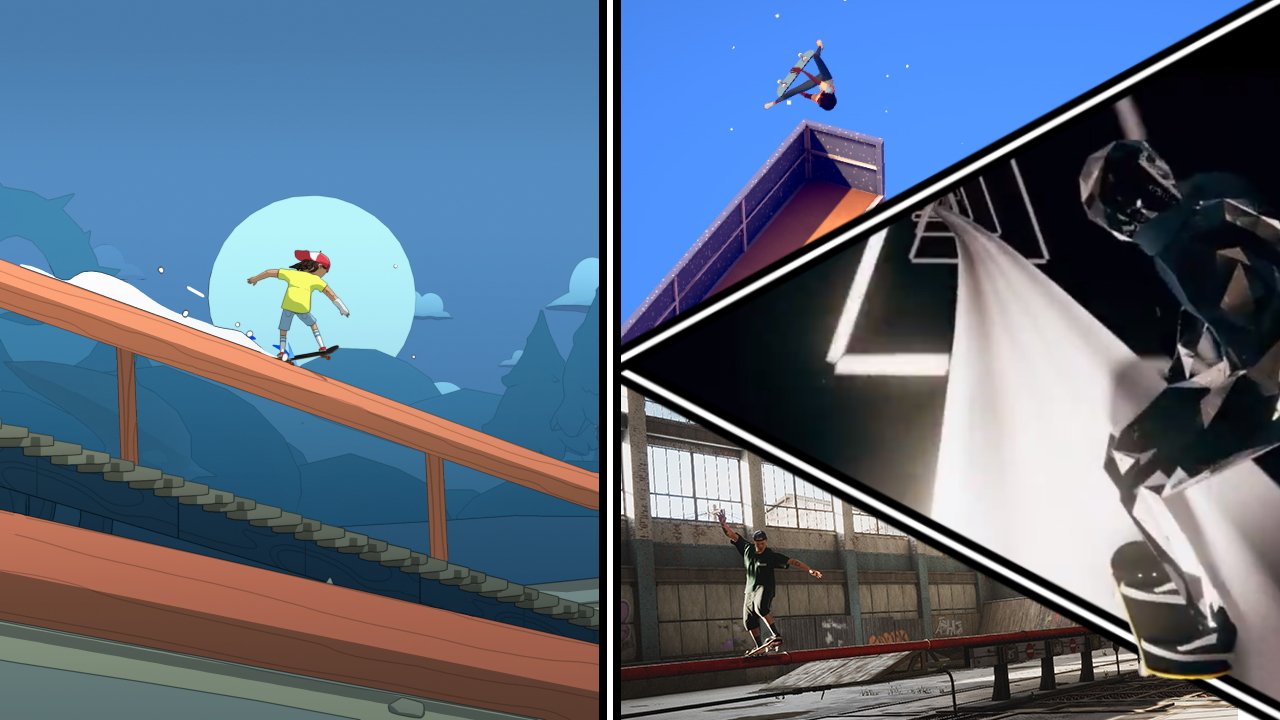 If the Tokyo Olympics have proven anything, it’s that we’re already at least 15 years past our potential skateboarding prime. But while real-life half-pipes are dominated by the clammy iron fist of the teenager, video game skateboarding parks are open for all to embarrass themselves in. And unless your button mashing gets too intense, there’s minimal risk of broken bones here. So if you’ve been inspired to hop back on the virtual board, allow us to offer a selection of new and upcoming skateboarding games that’ll let you lose yourself in the kickflip life.

Skateboarding video games for those sick of the daily grind

Practicing skateboarding in real life means bruised knees, sore limbs, and exhaustion. In The Ramp? Pure serenity. This tiny slice of skateboarding offers a tidy selection of ramps, pipes, parks and swimming pools to roll around, all accompanied by mellow hip-hop beats. There are no scoreboards or time limits to worry about here. It’s just you, your board, and all the time you’re willing to give.

Solo designer Paul Schnepf said that his aim in designing The Ramp was “capturing the incredible flow of half pipe skateboarding,” and that he thinks of it as a “digital toy” instead of a typical video game. There are no unlockables to earn or challenges to beat – pick up The Ramp for its small asking price on Steam and you’re free to soothe yourself with grinds and airborne tricks for as long or little as you like.

The OlliOlli series has been tricking its side-scrolling way across our screens for years now, but the latest entry is preparing to deliver a whole new level of rad. Brought to life in vibrant cartoon colors, OlliOlli World will see you rolling and grinding at pace on a mission to discover the gods of skating.

The world of Radlandia is crammed full of unusual and entertaining characters. By exploring different paths on each level, you can unlock challenges and trials, or just have a chat with an amphibian businessman. You know, normal skater stuff. OlliOlli World will feature plenty of customization not just in looks, but in tricks too – the game promises over a hundred different moves to master. OlliOlli World is due to be released on PC, Nintendo Switch, PS4, PS5, Xbox One, and Xbox Series X/S this winter.

After a more in-depth take on the sport? Skater XL could be the game for you, if you’ve got a head for tricks. Intended to offer unparalleled control, Skater XL doesn’t include pre-programmed tricks, instead letting you freely control the board movement using your controller’s thumbsticks. It’s intense stuff, but great for skaters who know their craft.

Skater XL was a little light on content at release, but updates since have added plenty of new content. It also now supports up to ten players in free-skating multiplayer, making it a great space to hang out with your mates. Skater XL is available on PS4 and Xbox One, but the PC version is considered the go-to release thanks to its mod support. Unfortunately, developer Easy Day Studios appears to be cracking down on unofficial updates. If that sounds like a precarious situation, consider checking out Session instead.

One to watch: Skate Story

Skate Story isn’t really a skateboarding game. Not in the usual sense, anyway. With dreamlike visuals, a distorted soundtrack, and a camera tucked uncomfortably tight to the board, you’d be forgiven for mistaking it for an art piece escaped from London's Tate Modern. But while Skate Story certainly doesn’t deliver the look you’d expect from skateboarding, it’s the feel that’s crucial here.

Speaking with PC Gamer, developer Sam Eng emphasized the emotions and experience of hopping on top of a board: “There are so many distinct feelings I get when skating that I want to express, that I find difficult to explain. At its most basic, I love that feeling of flow.” Skate Story may be different, but it’s not light on technicality either, asking you to adjust feet position and balance to nail tricks as you skate your way free of the underworld.

The fact that Tony Hawk is still sliding up and down half pipes today brings us no end of joy, and makes it an extra travesty that his was the Named-Mantm Game Series to peter out into obscurity. Thankfully, developer Vicarious Visions had just enough time last year to deliver this superb remastered package to our consoles before being gobbled up into the development gears of Blizzard.

Tony Hawk’s Pro Skater 1+2 perfectly captures the joyous physics of Neversoft’s original titles, and even grants you the choice of cruising around that iconic warehouse as the younger or modern-day versions of skating legends. A must for anyone who grew up playing the originals.

Adorably rotund birds and skateboards aren’t often combined in media, but as Skatebird proves, they really ought to be. This upcoming indie title from Glass Bottom Games lets live-at-home budgies loose from their cages. Instead of leaving a mess all over the living room, however, these birds are only look to tear up your tabletop course.

Grinding along staplers and stalling off the back of monitors, these birds are such combo machines whose only way of life is the board. Aiming for a chilled out experience that’s more fun than technical, Skatebird promises “simple controls even a Hawk named Tony would dig.” It’s due out on Steam, Xbox, and Nintendo Switch, September 16.

Know of any other skateboarding video games that should be on every board lovers radar? Share them in the comments below.