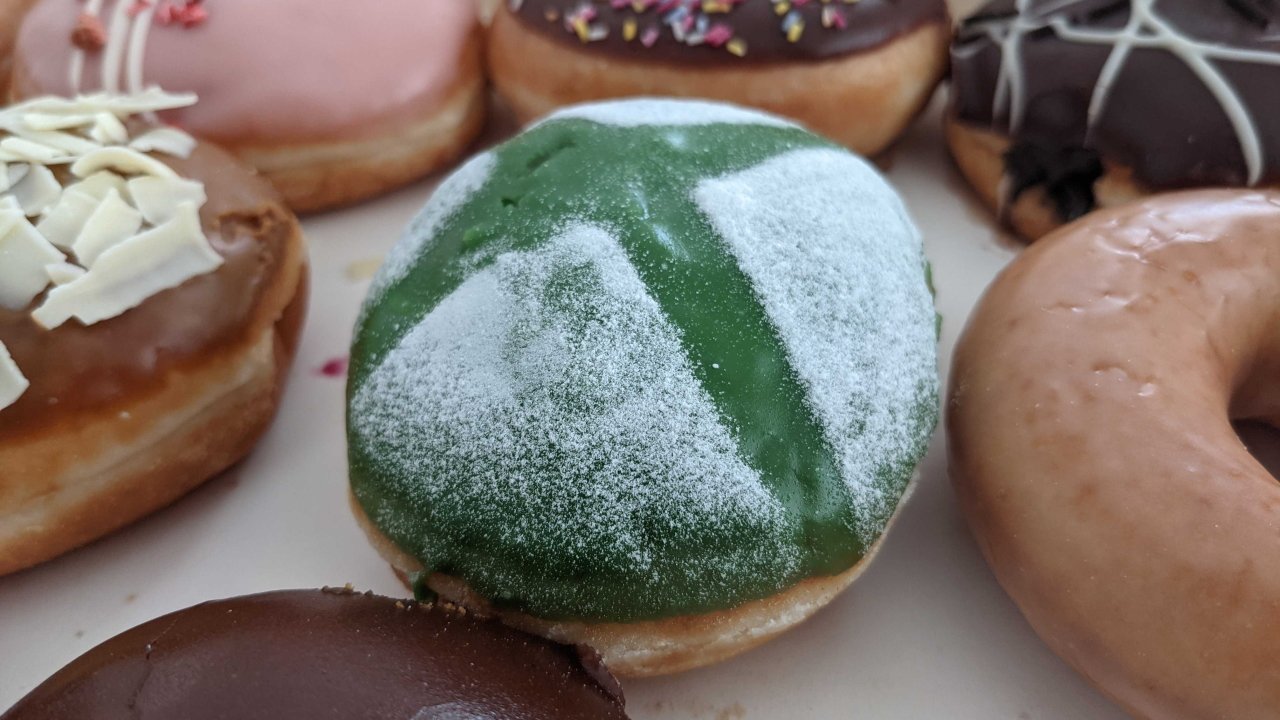 It was made for our mouths, and who are we to turn down such a challenge? When Krispy Kreme shared a video spoofing the Xbox Series X’s Project Scarlett reveal, we initially assumed it was a joke. Yet here we are, with an X-marked doughnut which promises to deliver perfection of flavors and form.

Can it live up to the hype? We got our gullets into the game and gobbled down the green-tinged treat to thoroughly assess its graphics and gameplay. So here it is: an entirely objective review of the Nexus Level Krispy Kreme Xbox doughnut.

Before you even reach to crack open the box lid, it’s clear that the Nexus Level Xbox doughnut wants to make an impression – this isn’t your ordinary sugary ball of delight, oh no. Adorned in lurid green, the Nexus Level stands out from your standard glazed and chocolate-topped offerings. Does it look appealing? No. Not unless you’re a fan of ingesting uranium-laced foodstuffs, anyway. But we’re putting that down to a bold stylistic choice, so won’t be docking points.

Close inspection revealed a high level of detail on the coating, with individual dusting particles discernable at impressive resolution. There’s definitely some ray tracing visible in the sheen of the upper half as well, though we weren’t able to discern what refresh rate the reflections were running at.

As an unglazed model, that barely discernible crunch as the outer shell cracks under your teeth was sadly lacking for the Nexus Level doughnut. A minor quibble, certainly, but the weaker first impression could put many off from delving into the more complicated, combo-heavy core of the experience.

The developers at Krispy Kreme have proven their prowess when it comes to delivering the dough, however, and the Xbox doughnut provided the level of soft-chewing satisfaction we’ve come to expect from a AAA team. Sadly, it was hard to ignore a minor air of staleness which lingered for the duration, leaving the gameplay feeling a little outdated for this day and age.

The Nexus Level Xbox doughnut claims to be “revolutionary” in its field – a bold description from a team clearly confident in their design. Unfortunately, confidence doesn’t always beget brilliance. In boldly striving to reach a new culinary ideal, the Nexus Level doughnut has simply uncovered yet another uninviting combination.

The green icing and sugar dusting work fine in tandem, but things quickly begin to unravel as you unlock the filling. Brownie batter is a stellar flavor, but you wouldn’t coat actual brownies in sickly sweet icing. The contrasting sucrose genres mesh poorly, resulting in a disjointed experience that lacks a thorough narrative from start to finish.

A disappointing showing here. With just one Xbox doughnut included in the box, there’s no opportunity to rerun the experience with a different build and approach without buying the entire package again.

The doughnut came packaged with a redeemable code, but upon registration we were immediately informed that we hadn’t won, despite already devouring the box. We’re still unsure as to how to 100% the Nexus Level doughnut and unlock the bonus content. We’re expecting a post-launch community effort to reveal a victory condition here, which effectively makes this the Dark Souls of doughnuts.

Consensus: 5/10 - Those with a seriously sweet tooth may find something to their taste here, but it's unlikely to move the medium forward in any meaningful way.