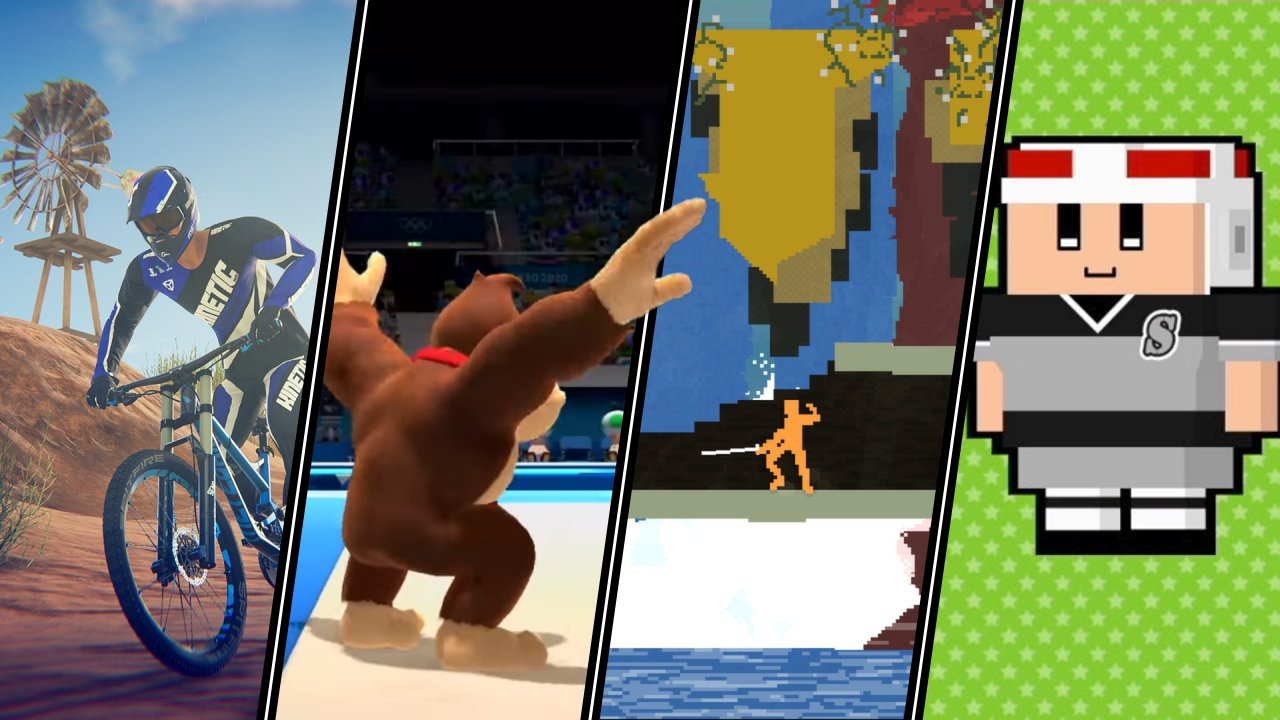 Compete in your own video game Olympics with these sporty titles

When you think about it, the Olympics are pretty much a real-life Mario Party. Athletes compete in a range of minigames, aiming to secure the highest score – be it through time, points, or battering their opposition. Bowser and Peach never had the luxury of four years’ training for each minigame trial, however. If the Tokyo 2020 Olympics have got you into the sporting spirit, here are our picks for the best games in which to host your very own video game Olympics. Grab your mates, get together, and prepare to earn some digital medals.

The Tokyo Olympics have brought several new sports into the Games, so let’s start our competition by celebrating the exciting addition of sport climbing. Any QWOP players out there will know that indie designer Bennet Foddy is no stranger to fiendishly tough sports titles, and GIRP is no less demanding.

In this Flash-based game, climbing the wall is as simple as holding the right combination of keys on your keyboard. The execution? Far, far trickier than you might expect. Download the game here. If you’re lucky enough to own a VR headset, feel free to substitute this for a more modern competition like a level of The Climb 2.

The refined art of fencing is a classic of the Olympics, and Nidhogg offers the purest video game rendition of the sport. Confined perfectly to a 2D plane, two pixelated opponents battle one another across simple arena screens by poking high, stabbing low, or throwing a blade from a distance (not typically considered good form in real fencing).

Each successful stab offers a chance to progress by a screen, but can you make it all the way to your opponent's final space? Glory means being by the mighty Nidhogg worm, and presumably throwing a medal down its gullet as well. A knockout format will work best, here.

With both BMX and mountain biking now staple ingredients of the Olympic sports sandwich, hurtling at pace over unsettlingly uneven ground is a necessary addition to our video game competition.

2018’s Descenders offers the purest blend of all biking elements, asking you to pelt it down procedurally generated courses in an adrenaline-packed, yet somehow relaxing experience. How you reach each checkpoint is up to you – just do it faster than anyone else. If side-on is more your style, consider booting up Trials Rising instead.

Rugby sevens got its first shot at the Olympics in Rio, 2016. It proved to be one of the standout events, with thrilling one-handed offloads and full-pitch sprints. Rugby video games are few and far between, let alone those that include a mode for the less-prominent sevens competition.

The ridiculous antics of Desktop Rugby might not match the player count, but the blistering pace of play and deluge of tries in each match make it a close enough experience. Plus, it’s cheap as chips.

Skateboarding has had its first debut at the Tokyo Olympic Games, and the entire set of medals was swept up – rather appropriately – by talented teenagers. What better way to pay homage, then, than by playing as a bunch of aging skating stars and you compete for high scores inside the classic Warehouse level?

Judo doesn’t get much attention in fighting games, which typically prefer to have characters body kick one another through scenery or, depending on the title, pull out each other’s spines. Tekken’s tight shuffling and grappling comes closest, however, so for this round it’s a knockout tournament in which competitors can only rely on the grab attacks of their given character. Our advice? Stick with the master of the ring: King.

We’d specifically been avoiding dedicated Olympics video games because – spoiler alert – they typically aren’t very good. However, If you’ve played any of Mario & Sonic’s previous Olympic outings, you’ll know that watching both series’ casts tossing batons and rolling around a gymnastics floor mat is a truly surreal experience. Attempting to maintain composure while Robotnik or Wario perform graceful splits and spins is a worthy challenge to conclude our competition. Plus, it’s a good excuse as any to post Bowser performing to Britney Spears’ Toxic once more:

So how did you fare? If you’re able to meet up in person, we highly recommend holding a miniature medals ceremony after each and every competition. If you're lacking medals, different flavors of Oreo or cookies make a more than worthy (and delectable) substitution for metal around your neck. If you’ve got any other titles you reckon would fit into a homemade video game Olympics, share them in the comments below!