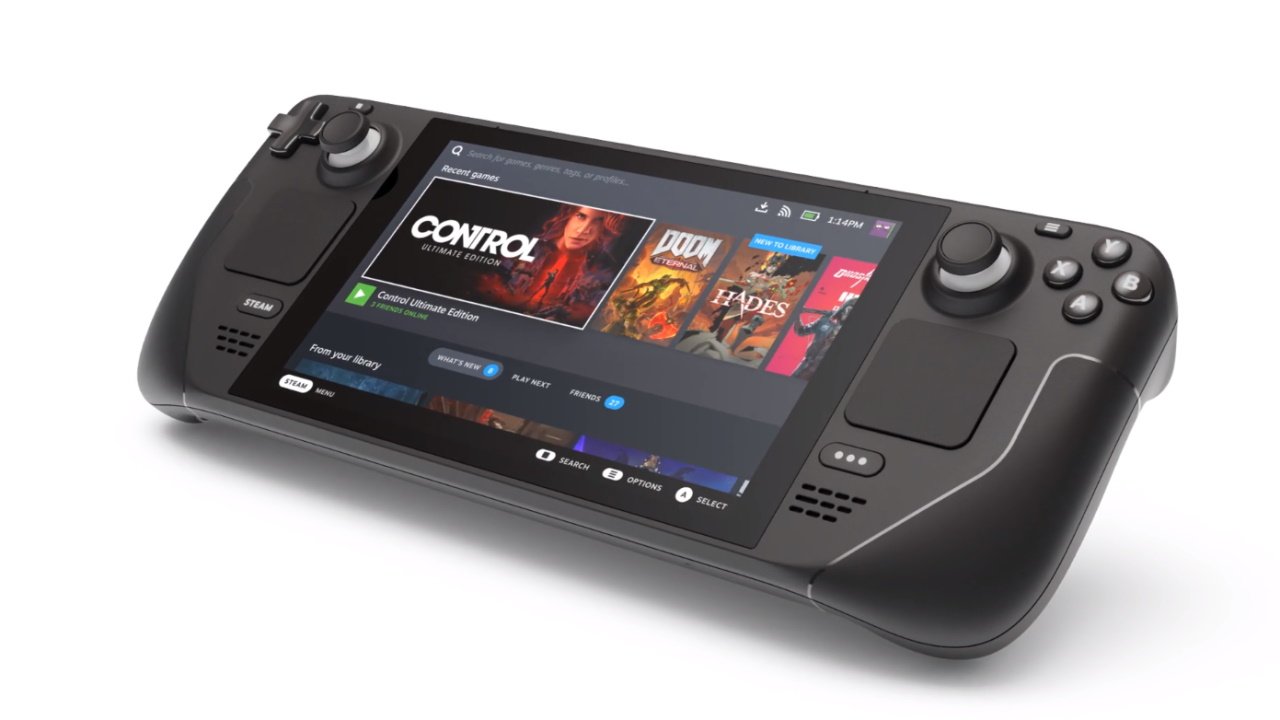 The Nintendo Switch’s cousin has been hitting the gym hard. Though it might look a bit like Nintendo’s hybrid device, the newly revealed Steam Deck from Valve is a very different beast. This handheld PC promises the hefty power required to run your Steam gaming library in the palm of your hand. We’ve rounded up everything we know about the Steam Deck below so you can weigh up your interest ahead of the machine’s December release.

What is the Steam Deck?

The Steam Deck is effectively a handheld PC. It has a 7-inch touchpad screen (that’s the same size as the new Switch OLED), and uses a custom Zen 2 AMD processor which Valve promises is powerful enough to “run the latest AAA games.”

The Steam Deck will allow access to your full library of Steam games and, according to Valve, its SteamOS operating system isn’t a closed system. You’ll be able to install Windows and more on the device too.

In case it wasn’t sounding Switchy enough for you yet, there’s also a dock available as a separate purchase which can hook the Steam Deck up to displays, USB peripherals, wired networking, and a power supply.

The Steam Deck release date is marked for December 2021 in the US, UK, Canada, and EU (other regions are marked for 2022). Pre-orders will start 10am PDT, July 16 for Steam account holders. Anyone with a Steam account which has made a purchase prior to June 2021 can order one per account. General reservations begin Sunday, July 18.

There are three Steam Deck models available, with price dependent on storage size:

If a machine purports to be portable, then it’s important to know just how much you’ll strain your arms when lugging it around or holding it over your face while gaming on the sofa.

What about the dock?

Sold separately, the Steam Deck Dock adds support for further peripherals, wired internet (Ethernet) support, external displays, and a dedicated power supply. It has three USB ports, a USB power connection, and both DisplayPort/HDMI connections. We don’t yet know when the dock will go on sale or how much it will cost.

Can the Steam Deck run Windows?

Yes. Valve was keen to stress that the Steam Deck isn’t a walled garden. You’ll be able to install Windows or another OS on the device if you choose, meaning you could potentially run other services such as the Epic Games Launcher through it. It could also conceivably be used to access the Xbox Game Pass library, though how well non-Steam games will perform has yet to be assessed.

Speaking with IGN, Valve designer Lawrence Yang said: “We don't think people should be locked into a certain direction or a certain set of software that they can install. If you buy a Steam Deck, it's a PC. You can install whatever you want on it, you can attach any peripherals you want to it. Maybe a better way to think about it is that it's a small PC with a controller attached as opposed to a gaming console.”

While it’s more expensive than the Nintendo Switch, the Steam Deck is unquestionably excellent value if it can deliver on its promises of AAA PC gaming performance. That said, there are a couple of points to consider for any potential buyers:

That’s everything we know about the Steam Deck details, including pricing, release date, and specs. What are your thoughts? Let us know in the comments below