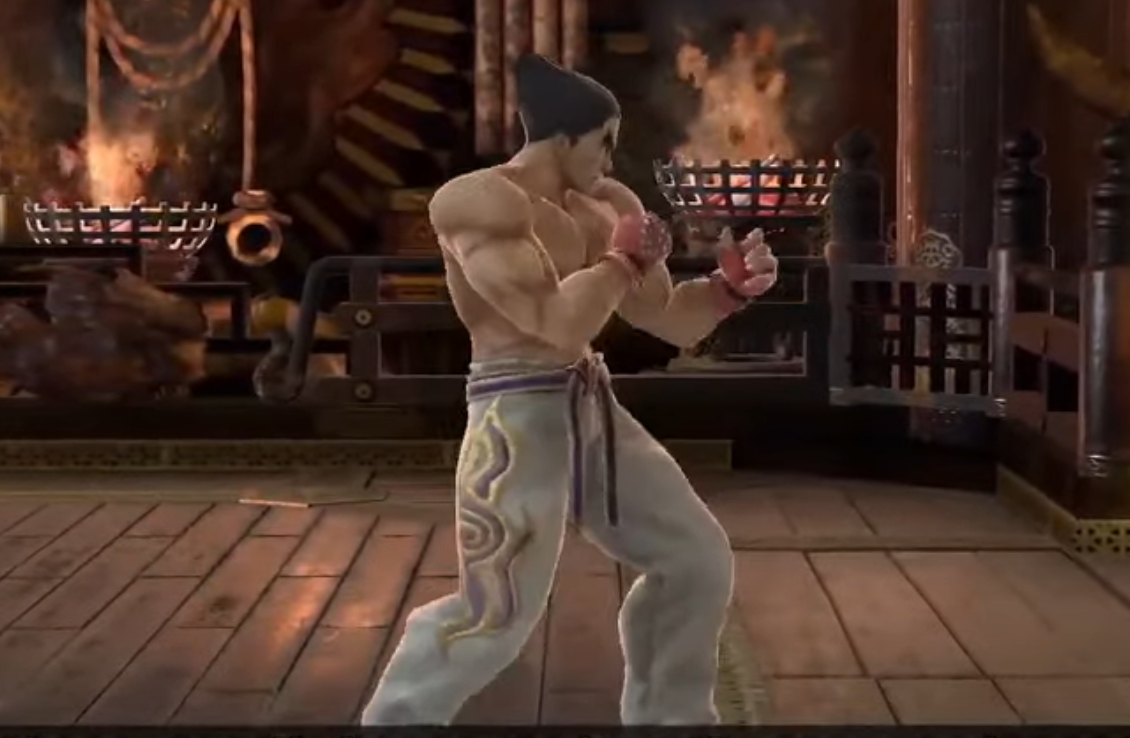 The PlayStation Studios stable has expanded once again.

Kazuya Mishima, of Tekken, is the latest fighter coming to Super Smash Bros. Ultimate. He's a fighter with high attack power that's great at making comebacks, even if he's losing at actually landing attacks. That said, he has limited reach, and lower attack speed than some other characters. Like Bowser, he has continuous super armor -- though not as much as the Mushroom Kingdom villain.

Dash Attack - Leaping Sidekick: Kazuya rushes forward with a kick while dashing, allowing him to close in on distant opponents.

Neutral (10 Hit Combo): Kazuya cycles through multiple moves as you hold or repeatedly push A.

Flash Punch Combo: A+A, pause, A. Kazuya blasts opponents back when you leave a gap after your second neutral attack then push A again.

Twin Pistons: Tilt Up + A x2. Kazuya launches enemies upwards with a punch and kick combo.

Oni Front Kick: Forward Tilt + A to have Kazuya kick straight out and launch opponents at a low trajectory.

Tsunami Kick: Tilt Down Diagonal +A x2 to have Kazuya do two kicks, the second of which will launch the opponent if the first lands.

Nejiri Uraken: Tilt Down + A to have Kazuya attack while moving forward. This move grants a brief invincibility period.

Stature Smash: Tilt Backwards Diagonal +A to kick out and knock an opponent on their butt.

Flash Tornado: Back Tilt +A is a kick/punch combo that can be used as a counterattack.

Jump Side Kick: Tilt Up Diagonal +A to do a short jumping kick attack.

Down Smash - Slide Kick: Terry lowers himself and kicks one foot forward at a medium height.

These should all be done after you have properly crouched, not done a down move.

Tombstone Crusher: Tilt Forward Diagonal +A while crouching. Kazuya rolls into a kick from his crouch that can be used as a counter.

Crouch Jab: Down Tilt +A while crouching. Kazuya does short punches from his crouched position.

Crouch Spin Kick: Tilt Diagonally Backwards +A while crouching. Kazuya does a sweeping kick from his crouched position.

Demon God Fist: Crouch +A while standing up. This is a unique input. If you have Kazuya attack while standing from a crouch, he unleashes a glowing purple punch that can cause opponents to heavily flinch.

Wind God Fist: Same as Crouch Dash but add A at the end. Launches enemies into the air with a gust of air accompanying the punch.

Dragon Uppercut: Forward + Down + Forward Diagonal + press and hold A. A powerful uppercut meant for KOs with lots of launching power.

Spinning Demon to Left Hook: Forward + Down + Forward Diagonal + B. Adds a left hook punch to a kick while crouch dashing.

Kazuya enters his Devil form and becomes more powerful. All of Kazuya's Smash attacks have varying amounts of super armor.

Side Smash -Glorious Demon God Fist: Kazuya uses his demon form to use a powerful punch with high launch power. This attack has the highest super armor of Kazuya's Smash attacks.

Up Smash - Devil Twister: A simple attack that launches your opponent upwards while twisting them around.

Down Smash - Lion Slayer: Kazuya uses his demon form to punch downward into enemies, launching them from the impact.

Back Air- Jumping Sobat: Kazuya does a backwards spinning kick in the air.

Up Air - Rising Toe Kick: Kazuya jumps and uses the top of his foot to kick and launch opponents.

Down Air - Demon Scissors: Kazuya jumps into the air and uses his demon form to do a powerful downward scissor kick into the opponent.

Grab - Sternum Smash: Kazuya grabs the opponent by the chest, doing a good deal of damage.

Back Throw - Steel Pedal Drop: Kazuya grabs the opponent and uses his whole down to flip them over his shoulder.

Up Throw- Air Inferno: Kazuya hurls the opponent into the air then launches demon energy up at them.

Down Throw - Stonehead: Kazuya basically does a sick headbutt.

Side Taunt - Demon's Wrath: A four-hit combo of kicks and punches. This is the fighter's most powerful taunt.

Those are all of Kazuya's moves in Super Smash Bros. Ultimate. Check out the latest DLC fighter starting Tuesday, June 29.