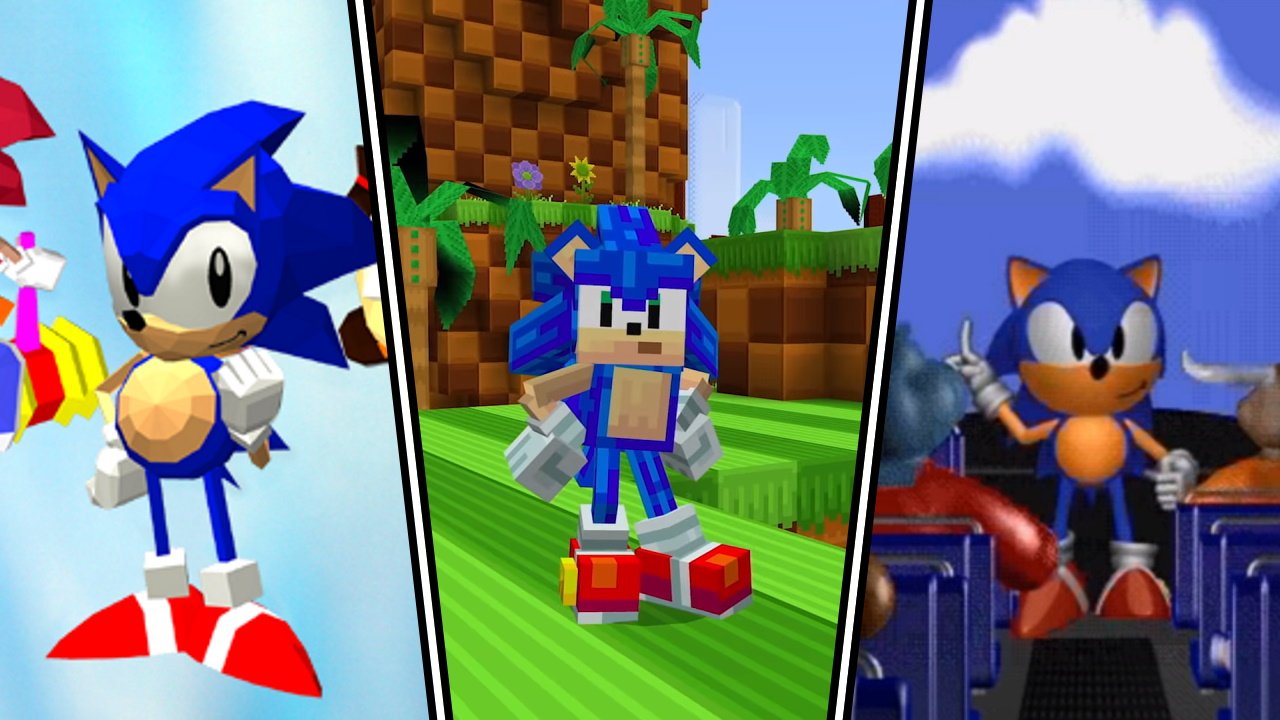 The blue blur turns 30 today, and while he may have gained a few grey pixels here and there, his fast-paced feet are as spry as ever. Like any good millennial, Sonic’s life journey has already taken him through several mid-life crises. Crises that spawned some, er, less-conventional outings for our famously fleet-footed friend. To that end, let’s ring in a fourth decade of ‘hog-based entertainment with a look back at some of Sonic the Hedgehog’s strangest spin-off releases.

Educational video games used to take things to a whole extra level. Back in the ‘90s, someone smartly identified that a popular video game franchise filled with colorful animals might be appealing enough to convince kids to actually learn something.

Like any good educational game, Sonic’s Schoolhouse couldn’t be bothered to come up with it’s own design, instead copying popular titles of several years past: the notoriously child-friendly first-person shooters of Doom and Wolfenstein 3D.

Players navigated through a slightly unsettling maze of brick-lined halls, solving puzzles to unlock doors. For some reason, puzzles here rarely involved shooting Nazis, with the game instead opting for tasks like hunting down numbers to answer challenging questions like “What comes after 3?” We can't imagine why.

Schoolhouse wasn’t the first educational attempt, either. 1995’s Tails and the Music Maker aimed to teach kids the fundamentals of tempo and rhythm through several odd minigames that saw Tails dodging fruit and playing musical chairs with frogs. It wasn’t quite Fuser or Guitar Hero, but we’re sure its incessant bleeping tunes annoyed the heck out of any parents unfortunate enough to pick it up.

Sonic the Hedgehog The Screen Saver

Remember screensavers? Even those young enough to have never feared screen burnout will have likely heard of Windows’ oddly entrancing pipes display. Never one to miss a potential sales market, our blue hedgehog bundled this screensaver package in as an extra incentive for 1997’s Sonic & Knuckles Collection in North America and Europe. The idea of releasing a screensaver as a packaged box is absurd today, but at the time Sega even sold it as a standalone product in Japan.

Sonic the Hedgehog The Screen Saver featured animated sprites of Sonic, Tails, and Knuckles which revealed a range of illustrations of the animal crew. The artwork was actually pretty darned cool, too, having largely been taken from Sega’s internal employee magazine, Harmony. Thankfully, it wasn’t just owners of this niche bit of software who got to enjoy them, as the images turned up again in the Sega Saturn’s Sonic Jam collection and the GameCube’s Sonic Gems Collection.

As his appearances in the Super Smash Bros. series have proven, Sonic is no slouch when it comes to throwing fists. But long before he tossed old rivalries aside and joined Nintendo’s iconic series, our azure hedgehog was already practicing the martial arts. Sonic Championship was a Virtua Fighter style arcade cabinet title which saw the series lead cast battering the rings out of one another within roped off arenas.

Known rather bluntly as Sonic the Fighters in Japan, it even introduced some new characters such as Bark the Polar Bear and Bean the Dynamite. Sonic’s only other dedicated foray into fighting territory would come in 2004’s Sonic Battle, which mixed 2D pixel showdowns with lighthearted minigames.

In case you thought Sonic’s more recent racing antics were a bit overt in their attempts to mimic Nintendo’s spin-off success, feast your eyes upon the shamlessness of 2000's Sonic Shuffle. In it, four Sonic characters make their way around a board made of red, blue, and special spaces. Land on a blue space and you’ll gain rings, land on a red one and you’ll lose them. Between each round, players compete in minigames to win more rings and save up for game-winning Precioustones. Sounding familiar yet?

But here’s the thing, Sonic Shuffle entirely differentiates itself from Mario Party by, er, letting you pick numbered cards instead of rolling a dice block. Amusingly, removing the random element turned Sonic Shuffle’s brutally tough AI into an unstoppable monster which knew every single card in play and could ruthlessly nick them from the feeble human opposition. Needless to say, it didn’t review well at the time and we haven’t seen the party board return in a Sonic game since.

This 1995 Game Gear release asked the pressing question, what would Sonic do if slowed down? After Robotnik tricks our hero into putting on some incredibly heavy “Speed Down Boots,” Sonic resolves that clearing the dastardly Villain’s entire labyrinth of traps is a safer bet than taking them off and airing his (presumably quite sweaty) toes to the world.

Unfortunately, Robotnik must have taken one too many spin attacks to the head, as he forgot that Sonic's locomotive talents aren't limited to his feet; the nippy hedgehog is more than capable of hurling himself around as a chaotic ball as well. What results is a bizarre Marble-Madness-esque puzzle game in which Sonic pings himself through isometric arenas, bouncing off walls and obstacles as he attempts to collect keys within a time limit. On the tiny Game Gear screen, it was about as confusing as you might expect.

And finally, we reach the modern day and arrive at Sonic’s ultimate form. To celebrate three decades of life, Sonic, Tails, Amy, and the crew have made their way into the blocky world of Minecraft with an official tie-in DLC pack. The Sonic x Minecraft DLC includes full 3D levels for you to race your friends through while collecting some suspiciously square rings. It’s not the crossover anyone would likely have predicted, but we’re already willing to bet that it’s a better game than Sonic Unleashed.

Know of any other weird and wonderful Sonic the Hedgehog spin-offs? Share them in the comments below to celebrate the 30th year of incorrectly colored woodland wildlife.