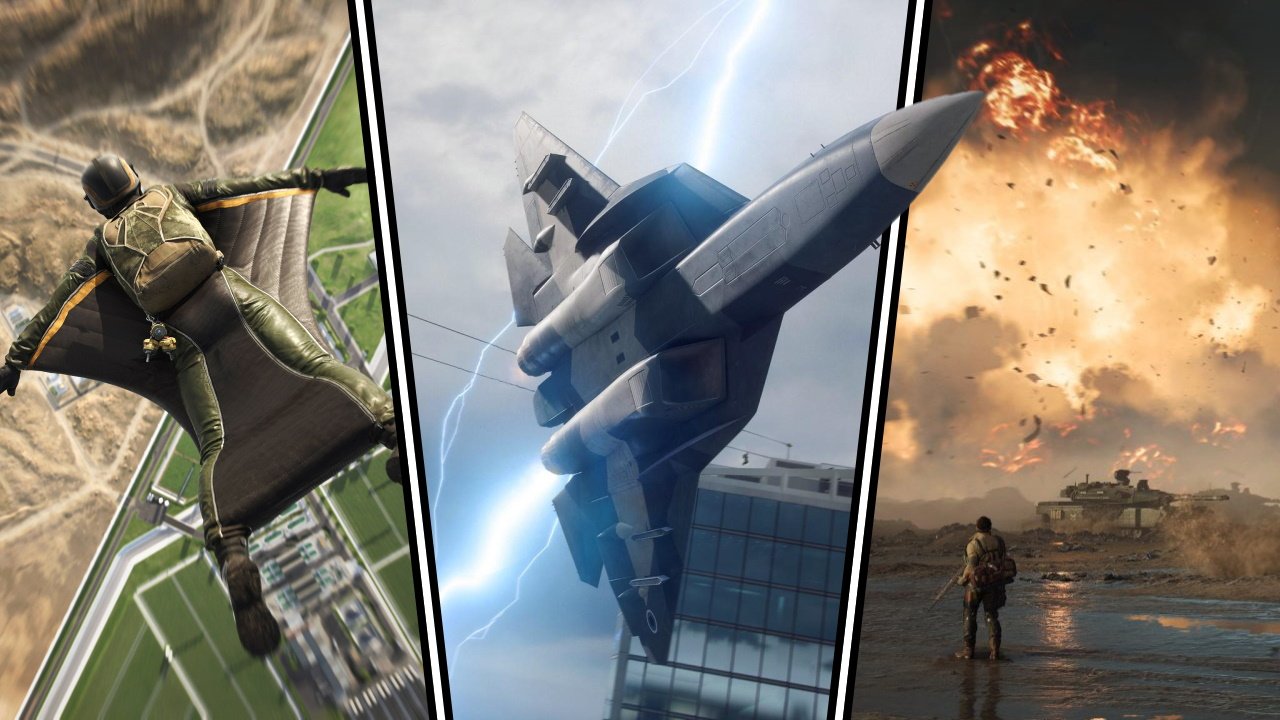 Yes, there are robot dogs. With the reveal trailer unleashed, Battlefield 2042 is out in the wilds and no longer merely a recurring leak in EA’s hull. We’re heading to the near future, and that brings with it a revamp of the class system, player counts, and more for the epic shooter series. We’ve got all the details on Battlefield 2042 available so far, including the setting and modes included, as well as the vehicles we’ll be able to drive and fly.

Set in the near future, Battlefield 2042 takes place in a world pushed to the brink by a dearth of resources and the onslaught of climate change. The crisis has seen the United States and Russia locked into war, while refugees called the Non-Patriated take up arms as well. An intriguing setting, but one that’ll only be explored in multiplayer because...

In an interview with Eurogamer, Battlefield design director Danial Berlin confirmed that 2042 won’t feature a campaign or battle royale mode. Instead, the team wants to focus all their efforts on delivering the best traditional battlefield multiplayer experience possible. “We're going to put all that emphasis and all those resources into building depth into the multiplayer,” Dean said. “Because that is what we do best.” The interview does tease some other unannounced modes, but it’s likely they’ll be variants of the standard multiplayer.

The levels of Battlefield 2042 are getting a much-needed boost in scale, and it’s all thanks to an increased player count on next-gen consoles or PC. While the Xbox One and PS4 versions will be locked to 64-player battles, the PS5, Xbox Series X/S, and PC versions of Battlefield 2042 will double the usual figure, supporting up to 128 players in a single match.

To make room for the extra fighters, Battlefield 2042 maps will be larger and laid out in sectors. Each area of interest holds multiple capture points, and you’ll need to control them all to command the sector. This should encourage that vast player count to spread out around the expanded levels. On the PS4 and Xbox One the maps will be smaller to account for the lower number of players. That means it's unlikely that next-gen and PC will play on the same servers as PS4 and Xbox One.

That massive tornado from the reveal trailer? You can expect more stuff like that in 2042. A big new feature is the addition of “dynamic world events” which can occur during matches. We don’t yet know the details of many beyond the city-shattering storm which sucks up players and vehicles alike. According to the developers, they can be as small as raising and lowering a bridge, or as large as the map-devastating twister shown in the trailer. We can understand why they’d have picked that one to show off.

These dynamic world events will change the nature of the level, but they aren’t always a guarantee. The shipping containers area shown briefly? That’ll include a crane which restructures the level mid-match. The gigantic rocket on a launch pad can also make a successful take off or fail spectacularly. Each result impacts the arenas players will need to wage war in.

Battlefield 2042 revamps the class system in a major way, following the precedent set by character-led games like Rainbow Six Siege and Valorant. Instead of your traditional class selection, Battlefield 2042 will include a choice of Specialists – characters which have access to unique gadgets. These include tools like a grappling hook, healing/reviving dart gun, a deployable turret, and that cool wingsuit shown in the trailer.

Each Specialist comes under one of the core classes (Medic, Assault, Engineer, etc.), but behaves differently to the others that share their field. Class weapon restrictions are gone, too. That means any Specialist can rock a sniper rifle, for example, not just those under the Recon banner.

According to early information, Battlefield 2042 will include 10 Specialists at launch, with four more added in battle pass seasons each year. With character-unique tools combinable with any weapon, it’s a new area of balance that DICE will need to contend with to avoid matches filled with 128 identical, overpowered characters.

Here are the Specialists we know of so far:

Did you say seasons and battle passes?

Yep, as has become the norm in modern shooters, Battlefield 2042 will feature seasons of content, including a free/premium battle pass. That pass will include new Specialists, which means new gadgets will be locked behind a paywall. We’ll have to see how that goes down closer to release.

We’ve already mentioned the lack of battle royale, but what modes are included? There are three core banners All-Out Warfare is your standard Battlefield fare, offering the capture points of Conquest mode and the attack-defend setups of the Breakthrough mode.

On top of those, a new mode called Hazard Zone is being added. This will center on squad combat, so expect lower player counts and likely tighter arenas to battle in. There’s another mode due to be revealed at EA Play, though DICE has yet to say much about it beyond the fact that series fans should love it.

There hasn't been an official confirmation of all the Battlefield 2042 vehicles we'll get to scoot around in come October, but we've put together a short list of all the vehicles we've spotted so far:

When can we see and play more?

Battlefield’s gameplay reveal is due on June 13, likely during one of the big E3 presentations. After that, EA Play on July 22 will give us a look at the other new mode for Battlefield 2042 and likely some more gameplay too.

As for playing, Battlefield 2042 has a technical test planned for “Battlefield veterans” in July, and a beta planned ahead of launch for anyone who has pre-ordered. No firm dates are available yet, but we might hear more on June 13 or July 22.

And finally, the Battlefield 2042 reveal trailer

Just in case you wanted another watch, here's the Battlefield 2042 reveal trailer. See if you can spot the penguins.

That’s everything we know so far about Battlefield 2042. Are you excited about the doubled player count in All-Out Warfare or hesitant over the swap to character Specialists? Let us know your thoughts in the comments below.