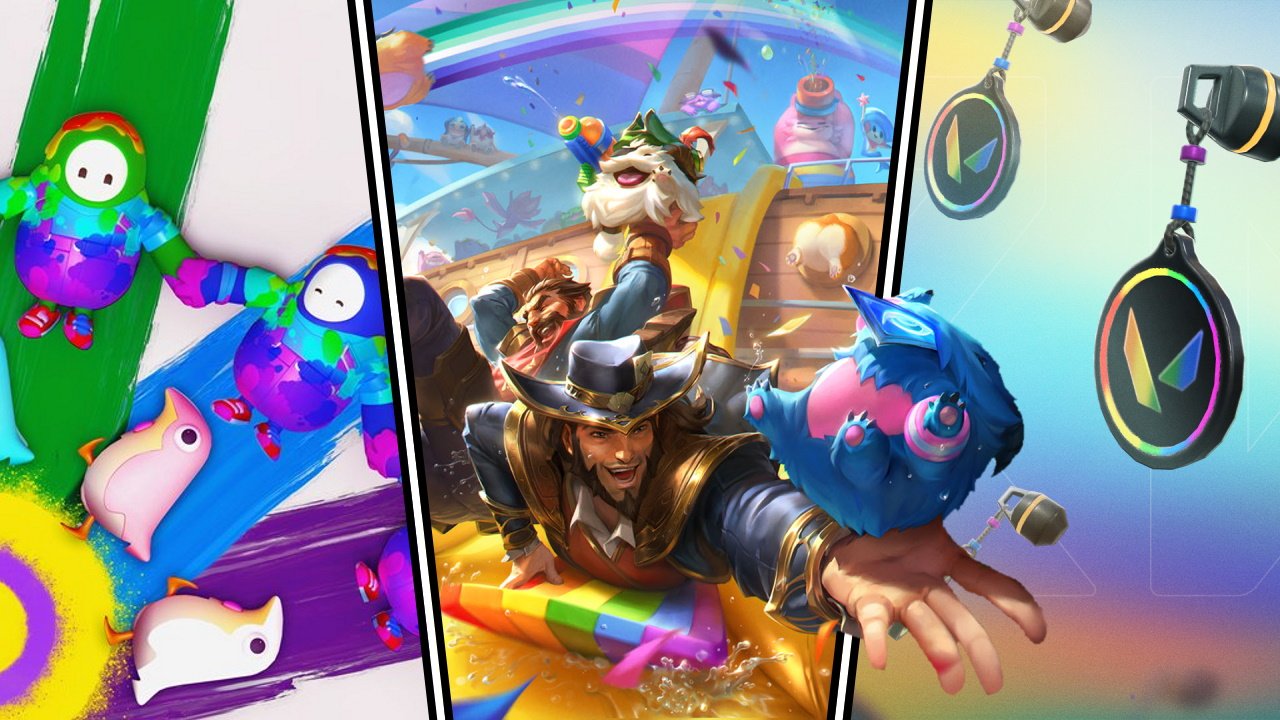 Pride Month is here, and plenty of our favorite video games (and consoles) are joining in the celebration of their LGBTQ+ players, developers, characters, and fans throughout June. Whether it’s through events, updates, or in-game cosmetic items, these are the games which have announced Pride 2022 celebrations so far, with details on how you can get involved.

Fall Guys is getting into the spirit of Pride Month 2022 by giving everyone who logs in during the current season the Painted with Pride costume for free. Developer Mediatonic has also shared a varied selection of Fall Guys Pride Month profile pictures to Twitter for anyone to download and use.

Bungie is celebrating Pride 2022 by selling the Bungie’s Pride Collectable Pin 2.0 from the Bungie Store. All profits from the sales go to LGBTQ+ non-profit organization It Gets Better, and anyone who buys the pin will also receive the Infinite Prismatic Destiny 2 emblem.

In June, Forza Horizon 5 players will be gifted a spexial rainbow livery for the 2009 Pagani Zonda Cinque Roadster. It’ll also be coming to Forza Horizon 4 and Forza Motorsport 7. There’s no date yet for when the livery will be given, but it’s due some time “later this month” for all players.

Players who log into Halo Infinite during June will receive the Unity Nameplate and emblem. The emblem features Master Chief’s helmet in golden yellow with rainbow bars across his visor.

League players can collect new Pengu pride icons in 2022 for 1 Blue Essence each.  There are eight in total, each of which creates a homeguard trail in the equivalent pride flag colors. Equip any of the icons and you can also alter your profile background to the key Runeterra Pride art. There are also Pride 2022 emotes available to earn through in-game missions as follows:

For Pride 2022, Legends of Runeterra is offering a Pride bundle for free! It includes a card back, Guardian, emote, and icon. The bundle is only available until June 20, so grab it quickly while you can.

Teamfight Tactics sees the return of Pride booms this month, with the new inclusion of the Mint Boom, showcased above. You’ll need to complete the straightforward Tacticians Stand United mission to unlock them. All that takes is two games of standard queue or one game of Double Up! before June 30.

Much like last year, Wild Rift is bringing back its Pride Poro icons (including a new Aquamarine Poro) which can be unlocked through a selection of missions until June 22. Here’s what you’ll need to do:

Valorant is once again offering a bundle of Pride banners to claim within Valorant, but this time they’re taking center stage in the game’s store. Along with the new Pride gun buddy, there are banner cards for Bisexual, Lesbian, Gay, Pansexual, Ace, Non-binary, and Trans Pride. Simply head to the in-game store during June and you can pick up the bundle for free.

The Queer Games Bundle returns for a second year on itch.io, and it’s packing event more content this time round. Available throughout June, the Queer Games Bundle 2022 features more than 500 games, tabletop RPGs, comics, books, and more from LGBTQ+ creators. How much will all that cost you? Just $60, or the price of a single AAA game. That'll net you some phenomenally titled games, including one titled I accidentally insulted a witch and now all of my clothes are sentient and they hate me! Buyers should take note that there are several 18+ games included in the collection, though you can pick and choose which titles you want to download and play. Pick up the Queer Games Bundle 2022 here.

Show off your style and feel free to be you with Xbox's Pride Gear collection! This Pride Month, Microsoft is donating to orgs that support LGBTQIA+ communities.

While not tied to a specific game, Xbox is donating additional money to LGBTQ+ organizations and has a number of Pride initiatives running in June. These include making the Pride-inspired controller available in the Xbox Design Lab from June 9 and offering Don’t Nod’s Tell Me Why for free on Xbox consoles and the Microsoft Store during June. Read the full details of Xbox’s Pride 2022 events here.

Those are all the video games celebrating Pride Month 2022 that we’ve seen so far, but we’ll aim to update this list as more companies announce festivities available in their universes. If you know of any that we've missed, share them in the comments section below!