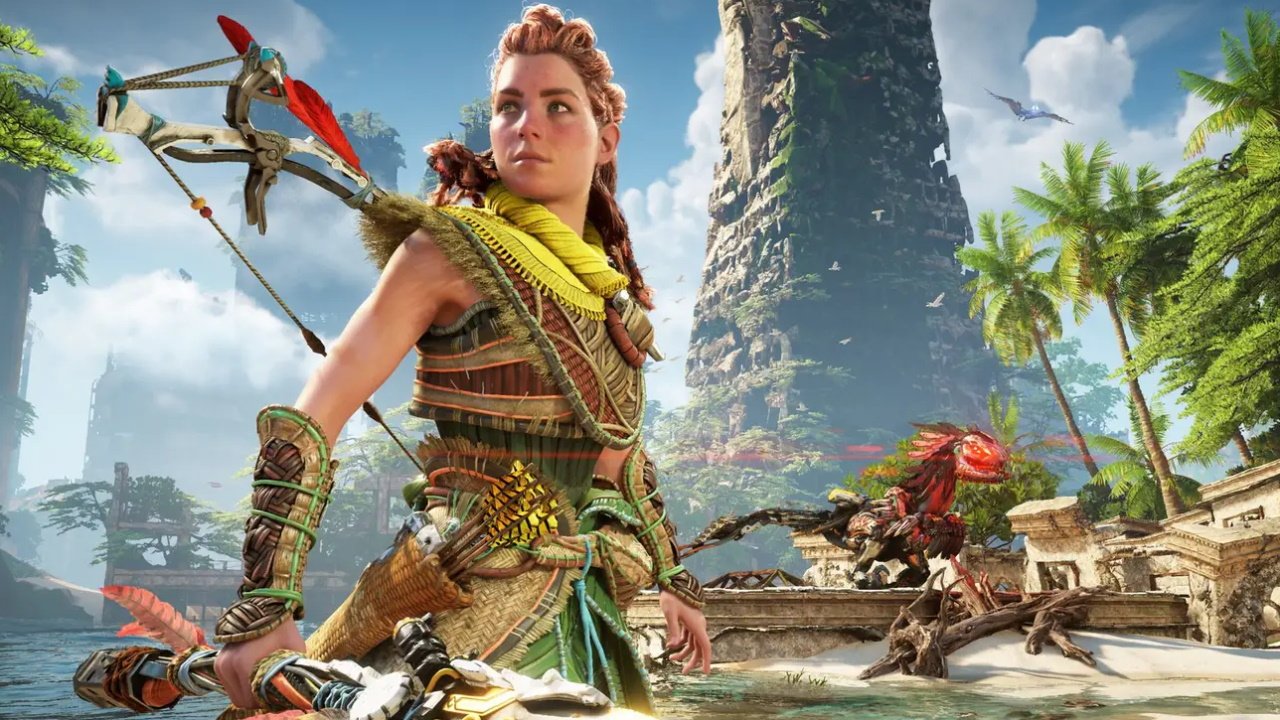 Aloy has been preparing a lot since 2017. The recent State of Play dedicated to Horizon Forbidden West gave us our first look at the game in action. Once we’d torn our eyes off the gorgeous footage to locate and collect our jaw, it gave us a bit of time to think over everything shown. Aloy has plenty of new tools at her disposal in Forbidden West, and the State of Play footage teased us with a look at many of them. Here’s everything we were shown during the 14 minutes of action.

Thanks to early screenshots and the lengthier State of Play, here are all the new tools and equipment we’ve seen in Horizon Forbidden West:

Aloy’s never been a slouch when it comes to parkour and free climbing, but she’s upped her game further in Horizon Forbidden West with the Pullcaster. Essentially an automated grappling hook, this tool can latch onto X-marked points in the environment (now highlighted by Aloy’s scan function) and pull Aloy mid-leap to a new area. Great for repositioning during a fight or just to expedite getting to and fro.

Developer Guerilla Games had already teased this addition to our dry-humored protagonist’s satchel, but the State of Play showed it in action. The Diving Mask includes a rebreather which will allow Aloy to spend as much time as she likes underwater. This opens up the chance for vast submerged regions to explore in Forbidden West, though we don’t really rate our chances against a Snapmaw in its home terrain.

Horizon was released alongside The Legend of Zelda: Breath of the Wild back in 2017, and Aloy was clearly a fan of Link’s penchant for sailing through the skies. The electric blue Shieldwing can be deployed when leaping off high ledges to let Aloy soar to a safe landing spot. It’s not yet clear if it has a limited duration, but you can bet people will be climbing the tallest mountains possible to soar off as soon as Aloy gets her hands on this new toy.

Aloy’s expanded both her personal capabilities and the deadly tools she’s carrying for the sequel. Here are all the weapons in Horizon Forbidden West that we’ve been shown so far:

The simplistic melee combat of Horizon Zero Dawn has had some serious reworking in Forbidden West, expanding Aloy’s skillset to include combos you can unleash to tackle different enemy types. You can also charge up spear strikes to deal increased damage and open up weak points, though it will leave Aloy open to faster enemies.

In addition, Aloy has access to a limited supply of Valor Surges which power up her spear for devastatingly powerful strikes. You’ll have several of these available, but the only one we’ve been shown so far knocks back all nearby enemies.

One entirely new weapon type shown was a javelin-style dart called the Spike Thrower which Aloy hurls from a distance. These stick in place on impact before detonating in an explosive blast after a brief delay. Sure to be in limited supply, they seem particularly useful when tackling the larger, mounted machines like the elephantine Tremortusk.

The Slingshot’s packing a gummy new type of ammunition in Forbidden West. Adhesive grenades will coat the legs of an aggressive machine in sticky goop, temporarily stalling it for an easy bowshot.

Putting in some ninja training on the side, Aloy can also drop smoke bombs in an instant. These temporarily blind and stun nearby enemies (including machines) to allow for a quick getaway.

And likely the part most of us were all excited about – the new machines we’ll fight, tame, and even ride. We had a few teased already, but here’s the expanded list of new machines in Horizon Forbidden West now that the State of Play has arrived:

Teased in early artwork and trailers, the Bristleback is a four-legged machine with two large tusks like a warthog. We don’t know much about it just yet, but it appears to have Blaze canisters strapped to its underside.

Appearing briefly in the State of Play showcase, Burrowers are smaller machines which move in herds. We only get a glimpse of them paddling through water, so it’s not clear if they also travel on land, but the name would certainly imply so. Likely similar in threat to Zero Dawn’s Watchers.

Resembling dromaeosaurs like Deinonychus, the Clawstrider is a medium-sized bipedal dinosaur machine built for combat. It attacks aggressively with claws and jaws, and can emit a powerful screech to stagger humans. Most exciting of all, both Aloy and her enemies can mount and ride Clawstriders, even firing bows from their backs.

Shown off in the debut reveal trailer for Horizon Forbidden West, the Shellsnapper is a massive machine which resembles a snapping turtle. It appears to be able to cover itself in foliage, hiding it from unwary eyes.

Inspired by pterosaurs, the Sunwing is a new airborne machine which stores energy through solar panels on each wing. They patrol high in the skies to collect energy but can prove deftly agile when alerted to an enemy below.

The mighty mammoth machine takes center stage in the Horizon Forbidden West State of Play. This new machine is a towering monster with enormous tusks that’ll put you off getting too close. Staying far away isn’t much better, however, as the Tremortusk can fire twin energy beams from its front or cannons from the side. We also see human enemies mounted atop the Tremortusk, directing its movements and attacks while firing their own shots off. Aloy can pick them off individually before tackling the machine itself.

Those are the new weapons, equipment, and machines in Horizon Forbidden West that we’ve been shown so far. We’ve no doubt that Guerilla Games is hiding plenty more for Aloy to tangle with, and we can’t wait to discover them as the game moves closer to its release.