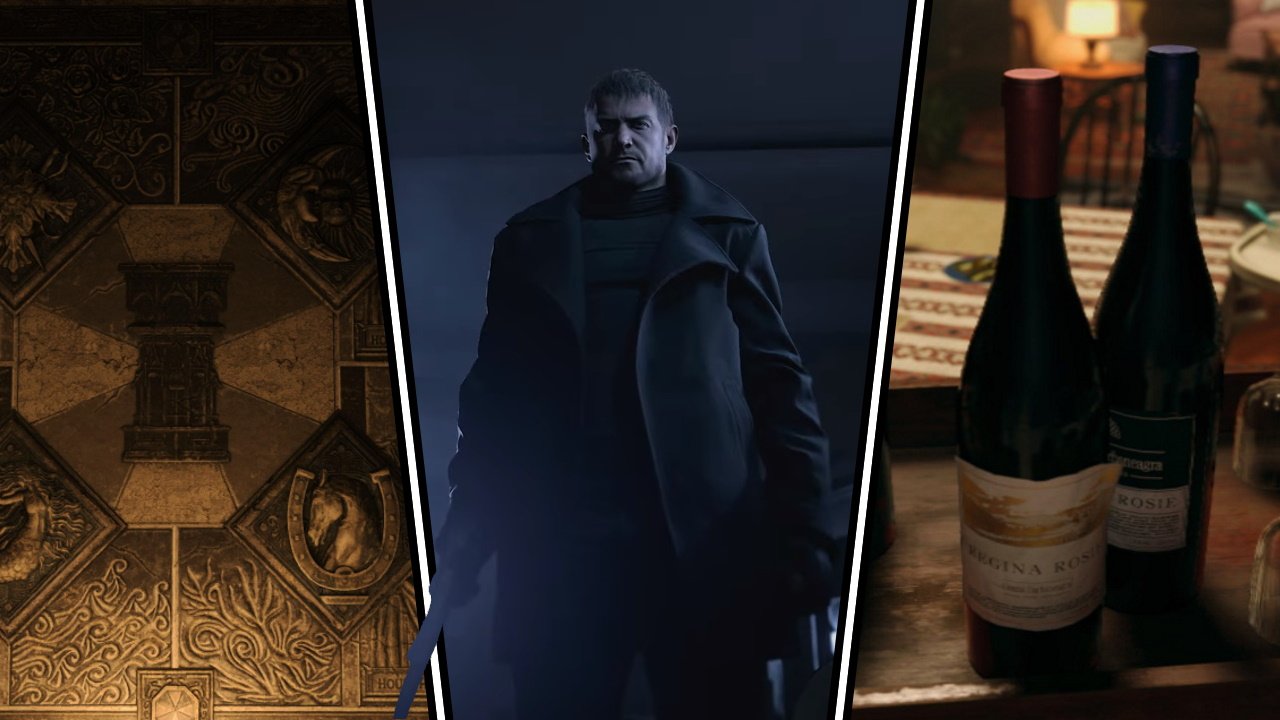 11 Resident Evil Village easter eggs you might have missed

Resident Evil clearly never got the memo that eggs aren’t supposed to come covered in mold. Still, where quantity is concerned, Village has you covered. Ethan Winters’ latest outing is packed to the brim with easy to miss references and secrets, so we’ve rounded up 11 of the best Resident Evil Village easter eggs for you to check out below.

Resident Evil Village easter eggs you might have missed

Ethan and Mia Winters have a seriously swanky house. Up until bullets start flying, the opening to Resident Evil Village seems pretty idyllic, with Mia cooking up a meal and the two enjoying a glass of wine. Until you realize that said wine is likely made with human blood.

A closer look at the (numerous) bottles littering their home and you’ll see their branded Regina Rosie. Nothing suspicious there, but explore Dimitrescu castle’s wine room later and you’ll find a note confirming that Regina Rosie is Dimitrescu’s main export. Given we later find out that the Mia pouring you a glass is in fact Mother Miranda, we can only assume this is a twisted joke on her part.

Ethan’s house is packed with nods to the series at large. Inspect his bookcases and you’ll find a firearms manual by Joseph Kendo, the unfortunate gunshop owner from Resident Evil 2. Kendo’s creations crop up in a range of Resident Evil titles, so it’s no surprise that Ethan has been learning from him here as well.

You’ll also note a book on castle architecture by one George Trevor. While certainly a less-known name than Kendo, Trevor is in fact the creator of the Spencer Mansion – Resident Evil’s iconic original locale. Good to know that he diversified his work beyond secret-laden mansions.

On top of the bookshelf upstairs in Ethan’s home is a Mr. Everywhere bobblehead. These were one of the main collectibles in Resident Evil 7, and it looks like Ethan was keen to hang on to one. Given how creepy they are, we really don’t know why.

The few normal folk Ethan runs into during Village don’t usually last long. Luiza’s abode is a particularly unfortunate hotspot, and not just because of the fire. However, while everyone inside meets a swift sticky end, you might also have noted that Luiza makes reference to her husband. He doesn’t show up later in the game, but that’s only because you’ve probably already met him.

Return to Luiza’s house later and you’ll find the Luiza’s Heirloom necklace. The treasure hides an important secret, but you might also note that it matches a necklace worn by the first person you encounter when entering the village. Could this be Luiza’s husband? The game never confirms it, but the odds seem good. Unfortunately, those same odds are very much not good for him, as he’s swiftly made into a hungry lycan’s lunch.

From combinable treasures to glistening gems, Village includes many callbacks to Leon’s adventure in Resident Evil 4. Our favorite by far is the fact that shooting any of the corvids fluttering around the snowy landscape will reward you with a healthy bonus of Lei. Leon’s efforts were often rewarded with grenades and more, but Ethan will need to make do with some spare money. Are the crows eating the cash, or holding it in their claws? On second thoughts, we don’t really want to know how Ethan removes them from the bodies.

Gun down all the ghouls in the depths of Castle Dimitrescu and you’ll be rewarded with a treasure named Ingrid’s Necklace. Who’s Ingrid? Well, if you’re lucky enough to own a PS5, you’ll have had the chance to download the Maiden demo ahead of Resident Evil Village’s launch. In it you play as a servant trapped within the castle’s dungeons.

As you attempt an escape, you find the very same necklace, with its description noting that it belongs to you. As you might have guessed, things don't go too well for poor Ingrid, who promptly gets caught by Lady Dimitrescu, drained of blood and transformed into a mindless ghoul. At least Ethan did her the honor of buying up the wine she helped supply.

The Duke’s a crucial character in Resident Evil Village’s story, and not just because he’s the one hooking Ethan up with serious firepower. He’s also, it turns out, a good friend of Resident Evil 4’s much-beloved merchant. Speak with him enough and he might utter “What’re ya buying! Just something an old friend of mine used to say.” We guess you could say that he’s certainly no stranger.

House Beneviento is by far the most terrifying section of Resident Evil Village, and it’s thanks in no small part to Donna’s living doll Angie, who loves nothing more than to torment you. If you can stomach the will to take a closer look at her face, however, you’ll note that it’s actually created in the shape of the Beneviento crest, with the moon and sun visible as the two halves. Now please, let’s never look at that terrifying thing again.

Actually, we’re not quite done with dolls (sorry). The Beneviento section of Village has a unique lineage within the series, taking clear inspiration from the 2003 E3 demo for Resident Evil 4. In a sequence that never made it to the full game, Leon is attacked by terrifying, giggling dolls wielding blades. Sound familiar? We’re glad it never cropped up in Leon’s outing, but that only left Ethan to suffer down the line. Okay, no more dolls, we promise.

Jumping ahead to Moreau’s land of fishy fantasies, Ethan has the chance to pick up an Antique Coin treasure from one of the Hound Wolf team’s encampments. These were a key collectible in Resident Evil 7, allowing Ethan to unlock permanent boosts or new tools. No wonder someone from Chris’ team decided to hang on to one!

Probably the most entertaining reference the Resident Evil series has played host to (besides Tofu, of course) comes during Ethan’s showdown with Heisenberg’s metal-clad abomination. Furious with Redfield for helping out Mr. Winters, Heisenberg refers to Chris as “that boulder-punching asshole,” in a nod to Resident Evil 5’s most infamous quicktime sequence.

Chris may have aged a bit, but those arms are still packing some serious rock-crunching muscle in Village. The Redfield clearly never slacks off when it comes to arm day.

12. Spencer and the origins of Umbrella

Ahh, the exposition room. Right at the closing stages of Resident Evil Village’s story, Chris Redfield stumbles upon Mother Miranda’s lab, and a wealth of information explaining the background to the game. It’s a little rushed as story beats go, but for series fans the room is a veritable treasure trove of insight.

A note within the room reveals that Oswell E. Spencer (owner of Resi 1’s Spencer Mansion and the founder of Umbrella) was actually a student of Mother Miranda. After she saved him during a hiking trip, she took him on as a mentor and revealed the secrets of the mutamycete mold. They eventually separated as Spencer pursued viruses instead, but stayed in touch for some time. The collaboration was clearly impactful for Spencer, however, as he took the logo and name of his company from the symbol present throughout the village's ancient ruins.