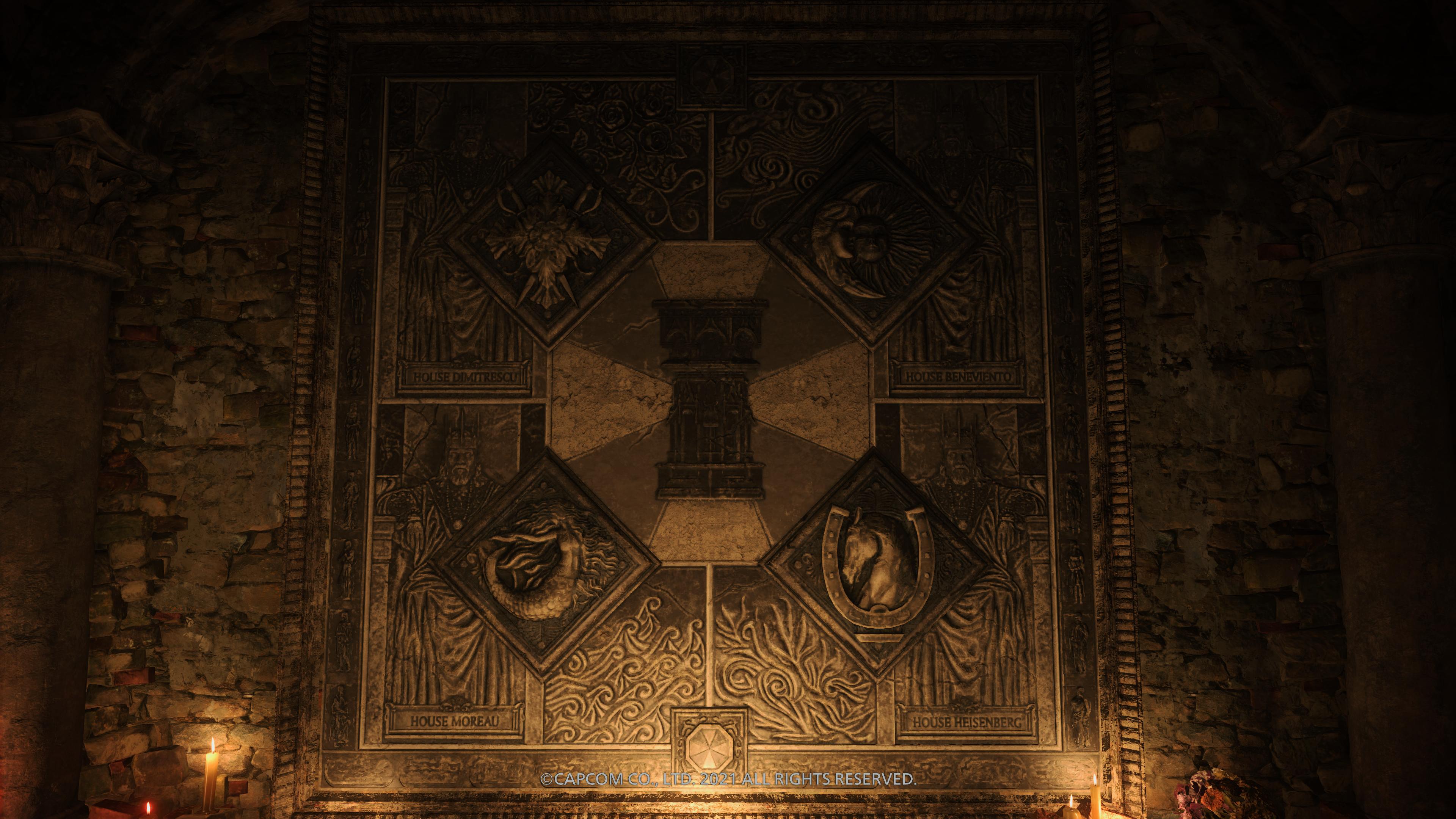 "What the heck is going on!?" Probably one of the milder responses you might have uttered after witnessing the ending to Resident Evil Village. An awful lot is thrown at you in the closing stages of Ethan Winters’ second outing, so don’t blame yourself for feeling lost. Fortunately, we’ve had time to process the Resident Evil Village story and ending, including everything from mechanical monsters to underground mold. Below we’ll walk you through the key events of the journey and how they tie in to previous games in the series, meaning you should walk away afterwards with the Resident Evil Village story and ending explained fully.

Spoiler warning: This article is filled to the brim with spoilers for Resident Evil Village. It’s intended for those who’ve wrapped up the main game, so stop reading now if you want to avoid learning too much. Comfortable? Let’s get started.

Resident Evil Village starts with Ethan seemingly happy at home with his wife, Mia, and young baby, Rose. Things quickly go south, however, as Chris Redfield and his team (Hound Wolf Squad) break in, seem to shoot Mia an excessive amount, then kidnap Ethan and Rose.

After the convey is disrupted, Ethan arrives at the titular village to discover that Rose has been split into four parts stored in flasks (though her “essence” remains intact). He must take down the four house leaders – Dimitrescu, Beneviento, Moreau, and Heisenberg – to recover Rose’s flasks and revive her.

If you’ve finished the story, you’ll now know that Mia at the start of the game was in fact Mother Miranda, the game’s main villain and a shapeshifter. After kidnapping Mia, she took her place in Ethan’s home in an attempt to connect with Rose. Chris Redfield realized this and sent his team to eliminate her, hence the excessive firepower used to bring her down. Fearing that Ethan and Rose could have been infected by Mother Miranda, he kidnaps them both to transport them to a testing facility.

Who is Mother Miranda?

No, you haven’t forgotten her or missed a previous title – Mother Miranda is an entirely new character to Resident Evil Village's story. At more than a hundred years old, however, she’s one of the most ancient characters to appear in the series yet.

Living in the village a century ago, Mother Miranda lost her own daughter, Eva, to the Spanish Flu (her grave is readable in the village’s Graveyard). Searching for a way to revive her, she uncovered, entirely by accident, the mutamycete mold living under the village. A massive fungal superorganism, the mutamycete mold mutates anything it interacts with, but also stores the information and essence of anyone absorbed by it (including those buried in the ground above it).

Mother Miranda was mutated by the mold, granting her a massively extended life, shapeshifting abilities, and access to the knowledge stored within it. As such, she realized she could revive her daughter should a suitable host be found. Which leads us nicely to the next part of the Resident Evil Village story and ending.

Searching for a candidate

Miranda began to create a religious cult among the villagers by offering them a cure to the spanish flu through mold infection. She experimented on a huge range of subjects, though most adults simply transformed into mindless lycans. As part of her modern experimentation, she worked with a criminal bioweapons team called The Connections (which included Mia and Lucas Baker) to create Eveline, the main antagonist of Resident Evil 7 and a super controller of the mold. Unfortunately, the rapid aging which came as a side effect for Eveline led Miranda to consider her a failure as well.

The four house leaders – Dimitrescu, Beneviento, Moreau, and Heisenberg – proved the most successful experiments, with Dimitrescu and Heisenberg highlighted as exerting the most control over their abilities. However, thanks to a rare blood disease and a mismatched temperament, none proved suitable as a vessel for Eva.

None until Ethan and Mia’s daughter Rose, that is. After pretending to die from Chris’s attack, Miranda revived herself in the convoy, crashing it and kidnapping Rose. Over the course of the game she plans to revive Eva into Rose’s body, but determines that Ethan would prove useful in taking out the four, powerful house leaders.

And so, we come to the ending, and Resident Evil Village’s most confusing and information-packed sequence. After Ethan takes down Heisenberg outside of the factory, Mother Miranda “kills” him by ripping his heart from his body, then heads off to complete her ritual.

Ethan isn’t quite dead, however. Not this version of him, anyway. Village reveals that during the opening events of Resident Evil 7, Ethan was actually killed by antagonist Jack Baker, dying in his house in Louisiana. But the mold infestation at the Baker household resurrected him, or at least assumed his memories and essence enough to assemble a mold-based version of Ethan. That explains his uncanny ability to have limbs severed off then reattached with only a splash of liquid, and swift recovery from impalement, mauling, and worse during Village.

After escaping from Louisiana, the mold-revived Ethan and Mia – who had already been infected by and cured of the mold – had a child. And it turns out a combo like that is ideal for creating a mold superbaby. Welcome to world, Rose Winters. During the final battle of Village, Mother Miranda attempts to revive her daughter, Eva, into Rose’s body. However, her connection to the mutamycete mold has waned over time and the resurrection fails, instead restoring Rose once more. After a short interaction with Resident Evil 7's Eveline in his mold-ridden mind, Ethan revives in Duke's caravan and is taken to the ceremony site.

Furious, Miranda attempts to take Rose once more and unleashes her full powers in a fight with Ethan. With a little help from Chris Redfield, Ethan takes her down but expends all of his own energy in the process. Unable to continue moving, he passes Rose to Chris, making him promise to help with her upbringing. Ethan then stays behind to detonate the explosives that Chris has planted on the mold’s root core underground.

Rose escapes with Mia, Chris, and the Hound Wolf team. After the credits, we cut to her grown up as a teenager, visiting Ethan’s grave. Though she seems to have lived a happy life, it’s clear that she’s being kept well under the thumb of the BSAA organization which Chris works for. Speaking to an agent who collects her she implies that she has access to powers she’s keeping hidden. As the car leaves, an unknown figure appears on the road in front of it...

How Resident Evil Village ties into the wider series

While Resident Evil Village is most closely related to the events of Resi 7, its ending unveils direct ties to the series at large. As Chris explores Miranda’s lab, he finds record of contact between her and Oswell E. Spencer, the founder of the Umbrella Corporation, It turns out that Miranda saved Spencer when he got lost on a hiking trip in Europe. She became his mentor, and tutored him on the behaviour of the mold.

The two eventually separated due to a disagreement over the purpose of their research. Spencer decided to name his research facility Umbrella, after the logo found in the ancient ruins around the mutamycete mold root. Though he learned a lot from Miranda, Spencer decided that viruses offered the more powerful future for bioweapons.

The end of the game also sees the BSAA arrive in the village, independent of Chris’ team. Those who’ve played Resident Evil 5 will recognize the Bioterrorism Security Assessment Alliance as the team Chris Redfield and Sheva Alomar are employed by. It’s revealed that the BSAA were sending bioweapons into the site to battle the mold creatures. It’s clear that Chris’ team, despite being employees of the BSAA, don’t fully trust them.