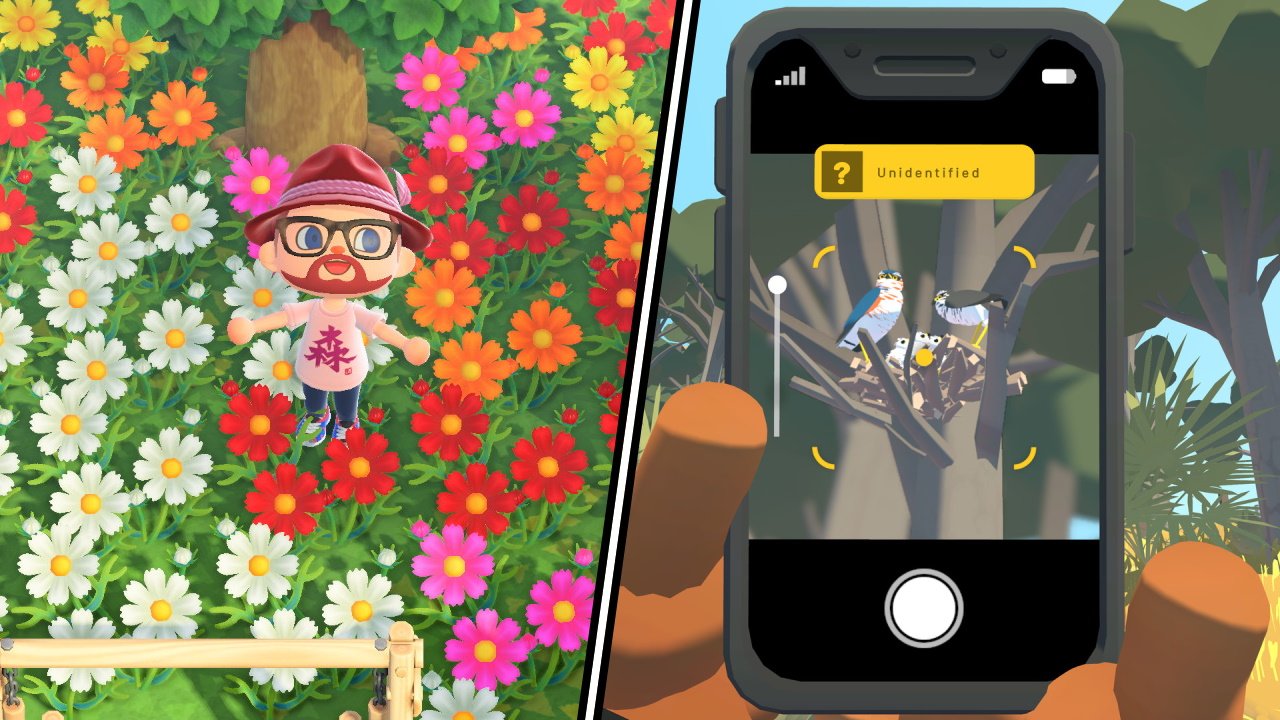 Congratulations on defeating the big boss of the seasonal calendar once again! Now that old man winter’s cold months of misery have been shunted into the past for another year, it’s time to lighten things up as we enter the domain of spring. To help you sweep the last frosty remnants from your gaming life, we’ve rounded up four choice games to get those spring vibes flowing.

Ahh, spring. As the sunlight begins to melt away the cold of winter, you open up your curtains to discover with a resigned sense of horror that your house/room is in an utter state. It’s time to get cleaning. But instead of the involved effort of tidying up our actual living spaces, let’s invest in restoring our underloved Animal Crossing: New Horizons islands instead. Hooray for sensible priorities!

By this point it’s been several months since most of us have waved hello to our villagers, meaning our islands are likely smothered by weeds and rampant flower growth, and our houses crawling with roaches. Enough is enough. Let’s get tidying up just in case that one friend still playing the game daily asks for a visit. Their masterpiece of an island might make ours look little better than a ramshackle rock by comparison, but at least it’ll be a cockroach-free rock!

Alternatively, check out Animal-Crossing-inspired indie title Cozy Grove, which is winning fans over with a surprisingly warm spirit for a game filled with ghosts.

Sets the seasonal mood for: An allergies-safe exploration of flowers.

Admission time: Spring is far from our favorite part of the year. It’s not that we don’t like blooming flowers, sunshine, or even a light bit of rain. It’s just that the air tends to be clogged with what we can only describe as eye-ruining sniffle toxins. For those of us who suffer, allergies – that’s hayfever, dear UK readers – suck. Bless the virtual world, then, for letting us stick our faces in horticultural delights without penalty.

Though it may be 12 years old, Flower remains an utter delight to flit through. Collecting petals and riding the winds is still one of the most meditative experiences you can slap on your TV, and the game remains gorgeous more than a decade after release. Given Flower is from the team that went on to make Journey, that quality shouldn’t really come as a surprise.

Sets the seasonal mood for: Reconnecting with wildlife.

We’re not the only ones stretching our limbs come springtime. The animal world is rousing itself from various states of slumber, torpor, hibernation, and other fancy ecological words we don’t quite understand. If you have a bird feeder, now’s the time to fill those seeds for your feathered friends. There’s no reason we shouldn’t pitch in for virtual critters too, and Alba: A Wildlife Adventure is the perfect place to start. The sunny mediterranean shores in Alba are closer to replicating a relaxing summer’s day, but we’re here for the inhabitants rather than weather. And we don’t mean the human ones.

With camera in hand, Alba’s holiday plans involved snapping photos of and cataloguing the birds, bees, and other creatures spread throughout the island. Unfortunately, pesky humans have been up to their littering and polluting ways, so it’s down to Alba and her friends to spark change in the world by conducting good deeds for men and beasts alike. Heartwarming stuff to ease those winter blues.

Sets the seasonal mood for: Some rather ferocious gardening.

After the frosts of winter, any good gardner knows that a well placed attack with shears or secateurs is vital for a new year of growth. But what happens when the plants decide to fight back? Calling in a zombie horde for assistance only seems practical, if you ask us. Plants vs. Zombies: Battle for Neighborville proves just how deadly your average sunflower can be as they rise up to duel against ghouls from the grave.

The asymmetrical, third-person multiplayer shooter has just been released on Nintendo Switch, bringing its oversized greenery and gunplay to a whole new audience. If the lawn outside is looking a little too tough to face today, tackle some unfriendly flora in video game form first by enlisting with the shambling masses.

That's our winter weariness washed away, but have you got any other springtime games to freshen up our screens? Share your choices with us in the comments below!