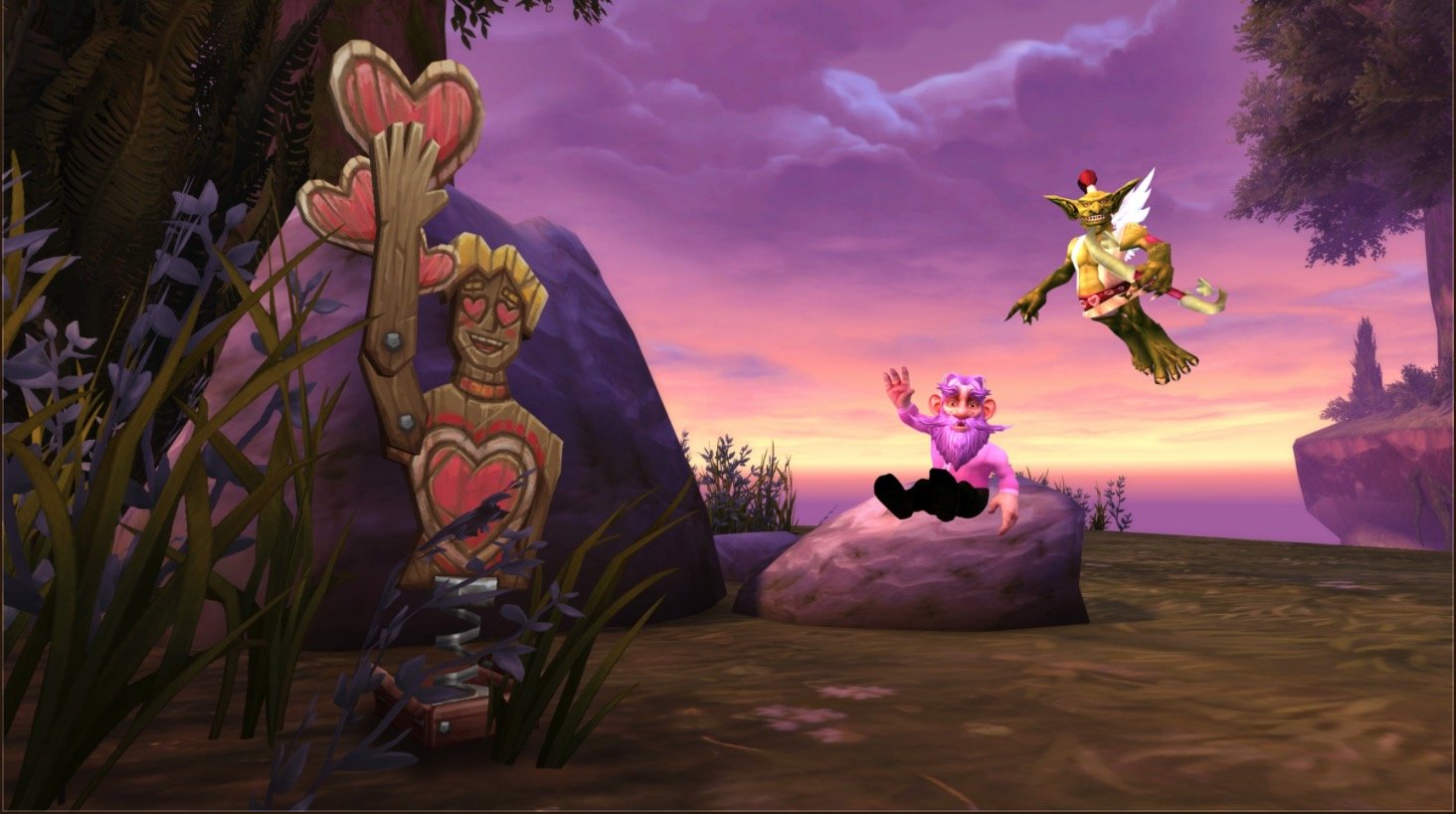 It’s Valentine’s Day! A time to get together with the one you love, sharing game worlds that you adore, and celebrate amazing, limited-time loot. Five popular multi-player hangouts are offering seasonal goodies this year: Gears of War, World of Warcraft, Destiny 2, Fortnite and Pokemon GO. The JRPG Final Fantasy XIV is also in on the act. Here’s what’s up for grabs…

The Coalition is offering the chance to earn Flaming Enforcer and Flaming Torque Bow skins in challenges running until 10am PDT, Monday, February 19. Rewards for all those that take part will be granted by mid-March, according to the guys at The Coalition.

Before getting started, you’ll need to register at gearsofwar.com, logging in with your Xbox LIVE details. With that done you’re good to go. There’s a special Cupid's Torque Bow Tag playlist available, with two straightforward sets of requirements for the weapons skins:

The Coalition suggests keeping track of stats manually, to ensure that you’ve met the requirements. Apparently the stats are not made visible to players in-game, which seems like an oversight to us.

We love that Square Enix has put such a kind-hearted spin on its ‘Valentione’s Day’ event across Eorzea. To participate, you must be level 15 or higher as a Disciple of War or Magic, and have completed the ‘It's Probably Pirates’ quest. Also, be advised that there are only a couple of days left on this, as the activities end February 17.

To kick things off, teleport to New Gridania and use the Aethernet located there to teleport to Mih Khetto's Amphitheatre. Lisette de Valentione, at coordinates X: 10.2, Y: 9.4 (Limsa Lominsa, Upper Decks) awaits to hand over the Lessons in Love seasonal quest. This is an instanced dungeon that demands a fair amount of teamwork and simple puzzle solving.

Crimson Days returns after taking a breather in 2017, with new and adjusted objectives to meet in exchange for seasonal loot. Guardians have until the weekly reset of February 20.

The biggest change is seen in the Crucible Days PvP playlist, in which pairs of Guardians are now encouraged to hang closer together for accelerated abilities recharge. The opposing team is guided to your position if you split up. In 2016, weaker players would often rope in skilful players to help, owing to the damage buff granted to allies when one guy went down.

Popular Destiny 1 map The Burning Shrine has returned, under the guise of The Burnout, and there’s good reason to stick at PvP since Crimson Engrams are likely to drop after all matches played, plus the Welcome to Crimson Days milestone is an added incentive.

Bungie says that there are no duplicates in the Crimson Engrams, which are also acquired by levelling up. In all, this event feels closer to Destiny 1 style time-investment versus reward, since the longer you play, the more loot is acquired. Crimson Engrams can only be earned through gameplay, they cannot be acquired through Eververse.

There is, however, Crimson Days loot – shaders, skins, ghosts, Sparrows, etc. – available for Silver via Tess Everis in the Tower if you wish to own specifics in a hurry.

Our favourite inclusion for Crimson Days 2018 is the relevance of Raid and Nightfall activity, offering their respective Dieselpunk Exotic Ornament, and the silly Flaunting Dance Emote.

"A Love Story, told the Fortnite way", says Epic Games about its Valentine’s Day themed skins in Battle Royale and a new Crossbow weapon that rewards stealth and accuracy. The February 14 patch, V.2.5.0., also brings with it a Valentine quest for Save the World mode.

The skins include a stone statue, presumably Cupid, for the guys and a pink teddy bear outfit, including head, for the girls. On a serious note, the crossbow has unlimited ammo, and can be found among floor loot or treasure chests. There are Rare and Epic versions.

There is also to be another quest line added with Update 3.00 on February 21, to coincide with new items in the store and a complete ‘Orchestra Edition’ overhaul of the soundtrack.

On Saturday, February 24, Pokémon GO is staging its Valentine-style Community Day – another chance to encounter a special Pokémon in the wild. The featured Pokémon has been announced as Dratini, the three-stage evolution Pokémon, with its unique move TBC. Players may also acquire the Resource Bonus ‘Triple Stardust’ by catching any Pokémon.

Be aware that this event lasts only a few hours, with exact timings as follows:

Blizzard’s MMO is offering the mother of all Valentine’s occasions with the reprisal of its Love is in the Air holiday event, taking place in Orgrimmar (Horde) and Stormwind (Alliance). It ends February 16, meaning there are only a couple of days left, and there is plenty to do.

Seasonal Boss – earn a Heart-Shaped Box (loot) through participation in the Apothecary Hummel encounter, located via the Dungeon Finder. This Daily Reward is available to all characters level 20 and above.

Holiday Quest Lines – Daily Quests grant Love Tokens to spend on holiday items, in addition to gold and experience. Dailies include Sample Crown Company Products, Gifts to Faction Leaders, and Crushing the Crown. There is also a main quest called Investigate the Crown Chemical Co. in which suspicious goblins are pursued by the Steamwheedle Cartel. The Apothecary Hummel boss encounter is unlocked upon completion of this whole chain.

Mounts – the easiest one to claim is Swift Lovebird, a pink, flightless bird purchased using Love Tokens at your faction’s Lovely Merchants. As for the flying mount Big Love Rocket, this mostly relies on luck and requires level 98 or above. It drops from Heart-Shaped Box daily rewards gained from defeating Apothecary Hummel.

Pets – there are three Battle Pets, cute but not essential. The Toxic Wasteling is looted during the Apothecary Hummel encounter. Both Truesilver Shafted Arrow and Lovebird Hatchling can be purchased using Love Tokens at Lovely Merchants.

Achievements – 17 of these are linked to Love is in the Air, some are tricky while others are left to chance. Among the easiest to complete are: The Rocket’s Pink Glare (fire 10 Love Rockets under 20 seconds); Perma-Peddle (obtain a permanent Peddlefeet pet by procuring a Truesilver Shafted Arrow); Lonely? (quaff Buttermilk Delight with someone in Dalaran at a Romantic Picnic), and Sweet Tooth (sample holiday candies Buttermilk Delight, Dark Desire, Sweet Surprise and Very Berry Cream).

Accessories – there are Heirlooms, Toys and Unnatural Enhancements for Love is in the Air , which include Timeworn Heirloom Scabbard and Ancient Heirloom Scabbard; Romantic Picnic Basket and Love Boat; ‘Enchantress’ Perfume and ‘Wizardry’ Cologne.