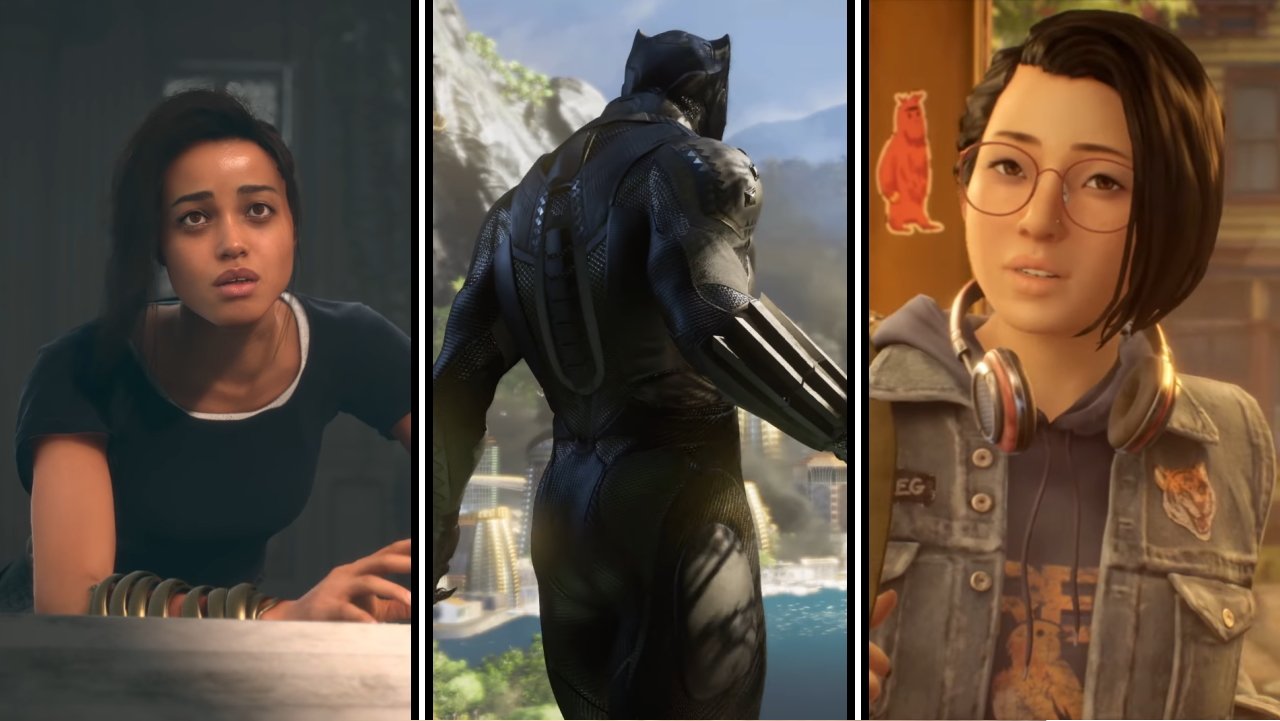 To celebrate a big year for Ms. Croft, a few special treats were announced for Tomb Raider fans. The Definitive Survivor Trilogy is a bundle chucking together all three titles and DLC in the rebooted series. The store pages went up ahead of the show itself, and include a hefty discount until early April. You’ll likely already know that Lara has made her way into Fortnite’s latest season, but the sprawling Croft Manor will also appear in the game’s creative mode next week. Finally, there’s also a Tomb Raider cookbook on the way. Yes, really.

Square Enix has teased several mobile releases for the coming months. Hitman Sniper Assassins is being developed by Square Enix Montreal and due this year, Just Cause Mobile is an isometric action shooter which promises suitably chaotic co-op action and is reportedly coming soon. Finally, an augmented reality Space Raiders game is in development. Anyone interested can sign up for a chance to take part in early playtests.

Black Panther is coming to Avengers

Next up was Marvel’s Avengers, which had several upcoming add-ons to reveal. Four new updates are arriving this year. The first two, Tachyon Anomaly and Red Room Takeover, are due in spring. The second two, Cosmic Cube and Wasteland Patrol, are due in or after summer. The real news, however, was that a Black Panther update is releasing later this year. War for Wakanda adds Black Panther as a playable character in a brand new story which sees him facing off against Klaw, who appears to be preparing an invasion force.

The next Life is Strange title is being developed by Deck Nine, the team behind Before the Storm. The story sees protagonist Alex Chen reuniting with her brother in the town of Haven Springs after eight years apart. Something goes horrible wrong, however. Alex is caught up in a mystery while attempting to understand her own supernatural powers. Alex can read and feel the emotions of others, visible in bursts of color. Along with understanding why they feel that way, Alex can even manipulate them, though the emotions affect her just as strongly. It’s due in Fall 2021, with the entire game releasing at once.

Along with True Colors, remasters of the original game and prequel Before the Storm are also on the way. These will include Improved visuals and mo-capped facial expressions to enhance the older releases. The Life is Strange Remastered Collection – also available Fall 2021 – can be purchased separately, or as part of the True Colors Ultimate Edition.

Finally, we got a short look at PlayStation 5 timed-exclusive Project Athia, now titled Forspoken (though the trailer’s YouTube description may have fooled you into thinking it was called Witch). The game was introduced by actor Ella Balinska, who plays the lead role of Frey Holland. Frey is described as “an ordinary young woman who must harness her magical abilities to survive in the fantastical yet dangerous land of Athia.”

It appears Frey might have been transported from our world to Athia, but she’s far from helpless against its threats. In the brief clip of gameplay shown, Frey is seen shooting around a rocky landscape using what can only be described as magical parkour. Along with telekinetically hurling rocks, we also see Frey summon vines from the ground to attack enemies. Forspoken is due to release in 2022 on PC and PS5, with a two-year console exclusivity.

That’s everything from the Square Enix Presents showcase! What was your favorite announcement? Let us know down in the comments section below.