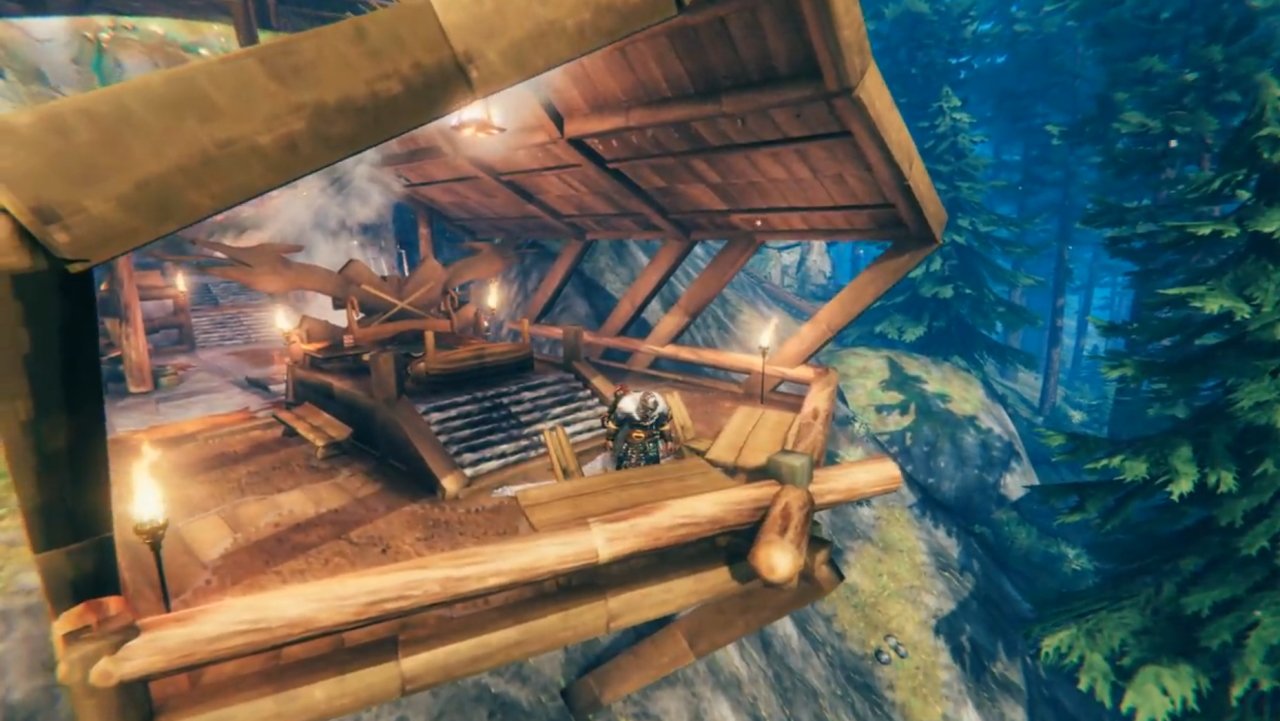 And we were proud of living in a tiny hovel. Valheim makes you work hard for your resources, so building up a base of any meaningful size is a lot of effort. Naturally that hasn’t stopped far more dedicated players than us from crafting ludicrously majestic constructions. So while you, like us, may be stuck cooking Neck tails in a four by four box, we can at least enjoy a look at some of the most impressive Valheim creations together, courtesy of the internet.

The best Valheim creations and buildings

Yes, really. Star Wars is about as far as you can get from Valheim’s axes and thatch, but Reddit user Colonel-James-Parker decided to bring the two a little closer. The recreation is pretty phenomenal, and we love the torch-lit engines and cockpit. Now, how many parsecs back to Tatooine? Check out video footage here.

If you're going to dedicate your Valheim time to recreating a masterpiece from the real world, why not restore the majesty of one sadly damaged? In one of the most impressive creations we've seen yet, Reddit user GlPv recently recreated the Notre Dame Cathedral in Valheim. The real building sadly suffered major damage due to a structural fire in 2019, but GIPv's incredible Valheim build stands untarnished. The inside has yet to be finished, but the creator might return to fill it out. That's provided their computer can handle the strain of rendering it all, of course.

If you’ve managed to conquer the game’s bosses, you’re already a wizard in our book. But to reward that hard work, you might consider hiring someone like Reddit user Khrynnn to craft you a home. They put together a mighty tower straight out of fantasy, and far more than just impressive to look at, it also functions as a home with portals to travel though, food to eat, and even an entire tree growing within. Bonus points for building it atop the tiniest sliver of land in the middle of the sea. That’s proper wizard chic. See the full video tour here.

Why settle for a paltry old magician’s tower when you could instead by living in the seat of the Dark Lord himself? Valheim player Rallado Gamer has shared several stages of his outrageously complex recreation of Sauron’s tower from The Lord of the Rings. We’d argue that Barad-dûr looks even more foreboding in Valheim than it does in Mordor, but that’s probably thanks to it being situated in the already hellish Plains biome. Only true evil could make a home there.

We never found the time to appreciate buildings in For Honor, probably because we were too busy dodging sword swings and getting kicked off ledge. Thankfully, Reddit user Colonel-James-Parker is back again, and was a bit more attentive than us. They’ve put together this phenomenal recreation of the game’s Viking Loghouse. Pretty spot on if you ask us, though we don’t see enough samurai falling off the balconies. Check out further photos here.

For a game set in the afterlife, Valheim keeps itself pretty down to muddy earth in settings. Right up until you put together a magical portal, that is. These ethereal creations stand out, so plenty of players have spent quite a bit of time putting together fancy houses for their comrades to arrive in after each jump. Above is Reddit user Amsix’s spiralled portal hub, but you can also check out Necrotex’s towering Portal Tree for more inspiration.

Not every creation needs to be a masterwork of art, beauty, and craftsmanship. Sometimes, smarts are all you need. Reddit user sonotleet shared the ingenious sundial design above, which reveals the number of minutes left of both day and night by using the shadows cast under the light of the sun and moon.

A boat’s maiden voyage has always been a special moment in history. Reddit user ParadoxHD clearly decided Valheim instantaneous crafting wasn’t delivering the impact necessary. To rectify this, they put together a boat launcher to drop new vessels into the water. Now that’s bound to make a splash with your Neck audiences.

Speaking of boat launchers, we couldn’t compile this list without including at least one of the massive boat slides the community has been showcasing. Here's HotGUUUUU's bouncy, bumpy ride across Valheim's map (full footage here). Prepare for an unexpected arrival in the Black Forest!

We weren’t expecting to watch people play beer pong in Valheim, but it’d seem Vikings just can’t stop surprising us. Reddit user JaplesPie is behind this entertaining design, which sees each player leap and drop items to land it on top of bottles of mead. You’ll need your own grog to down in real life, mind. Take a look at the game in action – drinking and all – by clicking here.

And for every impressive solo structure, Valheim’s online communities are also packed with jaw-dropping towns crafted by individuals or groups over hundreds of hours. Take a look at the marvelous creations by Fyxate, firebearhero, _-GH05T-, HairMetalMadness, and Cohh if you’re after inspiration for your own abodes. Just try not to weep at the effort on display.

Those were our picks for the best Valheim creations shared by the game's community. Spotted anything else that knocked your Viking off his feet harder than a troll’s club? Share it with us in the comments section below!