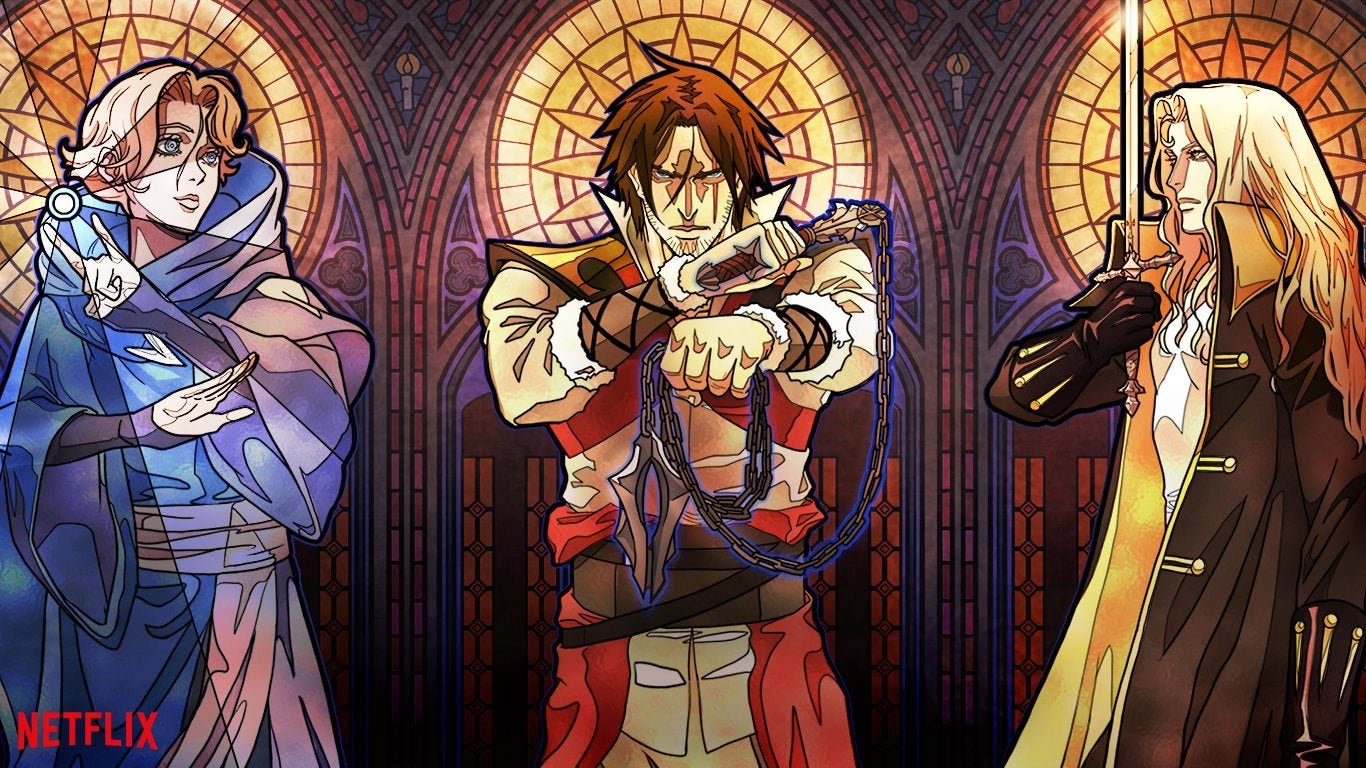 We thought we were big video game fans, but Netflix is making us look like we’ve never even heard of Mario before. Not content with the success of The Witcher, the streaming service has gone all in on gaming, with show after show based on popular video games. So many, in fact, that it’s getting hard to keep up. To help you plan your watching schedule for the future, we’ve catalogued all the video game Netflix shows that are available now or will be funneled down the magical web pipes to our screens in the future.

Please note that we’re only including Netflix original productions, not all video game movies on the platform. Don’t worry though, as most of the others are pretty rubbish anyway!

What it’s all about: The first of many, Castlevania’s animated adaptation sees Trevor Belmont (played by Richard Armitage) teaming up with Speaker magician Sypha and half-vampire Alucard to take down Dracula and other mighty vampire lords. The show has wrapped up after four seasons, so there's no fear of cliffhanger endings here.

What it’s all about: After his village and family are decimated by a dragon, Ethan is brought back from death as an Arisen. He vows to take down the dragon that ruined his life and killed hundreds, but the journey doesn’t quite play out as expected.

The story follows Dragon Knight Davin and Mirana as they get caught between several factions after witnessing an Eldwurm's demise. It's produced by Studio MIR, who previously created The Legend of Korra and Voltron.

What it’s all about: Prior to the studio’s financial collapse, Telltale Games ported their episodic, point-and-click adventure to Netflix. Viewers can interact with the blocky story at key moments to make decisions using their TV remote. Only five episodes from the first season are available on the service.

What it’s all about: Resident Evil 2 protagonists Claire Redfield and Leon Kennedy return in the latest animated take on the series. Capcom's Hiroyuki Kobayashi is the lead producer on a story that sees the US government caught up in zombie scandal involving foreign interests, secret agents, and yes, fancy strains of virus. As ridiculous as it sounds.

What it’s all about: Geralt of Rivia just wants to hunt monsters for a living, but other political machinations keep getting in the way. The story is based on the fantasy books by Andrzej Sapkowski which also inspired CD Projekt Red’s video games. Along with Geralt, the plot follows new mage Yennefer and orphaned runaway Ciri. Their fates end up intertwined as war breaks out across the land. The first season proved so successful for Netflix that a second season followed in short order.

What it’s all about: A kid’s cartoon based on the nails-nard co-op platformer. Tru Valentino and Frank Todaro voice Cuphead and Mugman, respectively.

That’s all you can watch right now, but there are so many more Netflix video game shows to come. Here’s what we know about each of them so far.

What it’s all about: We don’t really know yet! Ubisoft’s Daneille Keinik and Jason Altman will be executive producers, but beyond that all is quiet. Expect an ancient history setting with Assassins and Templars vying for power. It can't be worse than the movie, can it?

What it's all about: All we know so far is that it's coming, but expect the first movie to focus on the plot of the original BioShock. Plans are to potentially create a new cinematic universe, so we could see Infinite's cloud city in future, too.

What it’s all about: A 10-episode anime series which follows a street kid growing up in Night City. The renowned Studio Trigger will helm the animation, with Hiroyuki Imaishi (Kill la Kill, Promare) directing. It’s an exciting prospect, despite its video game inspiration falling rather flat upon arrival.

What it’s all about: Announced back in 2018, we’ve heard almost nothing since about this adaptation of Capcom’s demon-hunting action series. The Castlevania series’ Adi Shankar is working on the project, but we’re waiting to hear more about what’s involved. Castlevania’s third season included a brief nod to the DMC franchise, which has us hopeful that the show hasn’t been dropped.

What it’s all about: An action-thriller inspired by the events of the Tom Clany video game. In case you’ve not played it, the game sees New York ravaged by a virus. In the aftermath, gangs and various factions have assumed control of the city’s districts. The player, as part of a secret organization, must head inside to save civilians and restore control. Jessica Chastain and Jake Gyllenhaal have been brought on board to star.

What it’s all about: Netflix’s foray into cluttered halls of Square Enix’s RPG series will take its inspiration from Final Fantasy XIV. The MMORPG continues to draw a huge player base, making it a prime fantasy setting to be explored. What little we know of the plot so far details a struggle between magic and technology in a land at war. Expect chocobos.

Monster Hunter: Legends of the Guild

What it’s all about: An Elder Dragon plans to migrate through young hunter Aiden's village. That's unfortunate, to say the least. To take it down, Aiden must learn the ropes from experienced hunters, craft new weapons, and hunt several different monsters. Calicos, of course, feature.

What it’s all about: Inspired by the survival horror games, the Netflix series will take place over two timelines. The first will follow siblings Jade and Billie Wesker as they move into a town called New Raccoon City (no concerns there) while the second is set 16 years later, following an older Jade after the T-Virus has devastated the world’s population. Supernatural writer and co-executive producer Andrew Dabb is taking charge of the series.

What it’s all about: So far all we know is that it'll take our favorite blue hedgehog on a multidimensional story of "self discovery and redemption." Sonic Prime is being animated by Vancouver-based studio Wild Brain with SEGA involved throughout the production, distribution, and licensing. Wild Brain has previously worked on a range of animated shows including Inspector Gadget. The team behind Ben 10 and Big Hero 6, Man of Action Entertainment, will also be involved, working as showrunners and executive producers.

What it’s all about: Splinter Cell’s hopes of ever getting a new video game grow slimmer each year, but at least there’s a Netflix show on the way. John Wick writer Derek Kolstad is writing and producing, with two seasons reportedly in the works. If you’ve forgotten what Splinter Cell is all about in the aeons since a game released, the story follows covert operative Sam Fisher as he takes on black ops for the NSA’s Third Echelon division.

What it's all about: Legendary and DJ2 Entertainment are tackling this animated series which follows on directly from the events in the rebooted video game series. It'll be set some time later in Lara's career, with Lara now a confident Tomb Raider.

1200 years before Geralt of Rivia, the worlds of monsters, men and elves merged into one, and the first Witcher came to be.

What it's all about: So popular was Henry Cavill's rendition of Geralt that a full spin-off series has already been confirmed. It'll be set over a thousand years before the main TV show and details the creation of the first Witcher.

Phew! That’s an awful lot of Netflix video game shows and movies in the works. While we don’t know for sure that all of them will reach fruition, there’s a lot to look forward to for gamers subscribed to the service.