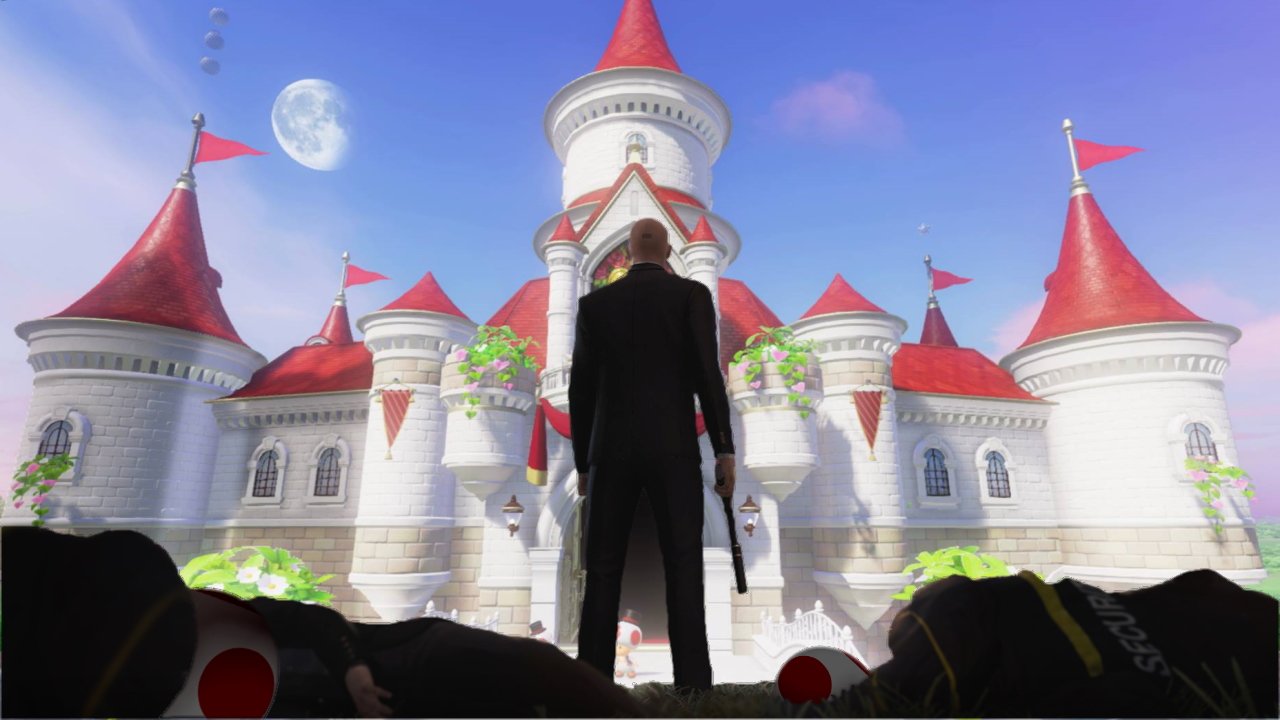 Your next mission could get a little unusual, 47. Hitman developer IO Interactive recently confirmed that it's working on an official James Bond game, titled Project 007. The franchise is a perfect fit for the studio, but it also got our minds wandering. What other universes are ripe for carefully crafted executions? Pack your bags, Agent, because we’re embarking on a deadly tour of the video game worlds we want Agent 47 to infiltrate.

Welcome to the Mushroom Kingdom, 47. I’ve taken the liberty of acquiring you a ticket to tonight’s ball at the castle. Your mission is to eliminate the Princess’ unwelcome associates and obtain the Power Stars they’re holding. That is Waluigi. With a flair for fashion and taste for romance, many consider him the heartthrob of the nation. What the people don’t know is that he’s been embezzling funds to support the despot king Bowser’s parakoopa military.

Just imagine it. 47’s bald dome ensconced within a Toad’s mushroom hat (and yes, it is a hat). The world’s deadliest assassin donning dungarees and a false moustache as he impersonates Luigi. David Bateson’s gloriously gravelly voice saying “Yes, it’s a-me” and “Wahoo” without an inkling of emotion. Mario has had ample opportunities to sort out the Mushroom Kingdom’s villains. It’s time for 47 to take a crack at them instead.

There’s something fishy in Pelican Town, and we don’t just mean old man NPC Willy after a long day on the pier. Perhaps we’ve been watching too many episodes of Murder She Wrote, but it’s always seemed like the cheery village is fostering a dark secret. The mayor is clearly up to no good, holding illicit affairs and erecting golden, self-aggrandizing statues, but how deep does this rot go? We need to uproot the head of this eminently corrupt Providence stronghold. Time to take out the weeds, 47.

The rote, daily routines of each town member make them prime targets for takedowns and impersonations, but honestly? We’d just love to see 47 rendered in pixel art. Being poisoned or fed to the animals is too good for this town’s Mayor, though. Let us get creative and give him a Game-of-Thrones-style golden crown by encasing him within his own statue.

Good afternoon, 47. Strap in, because your destination today is the Citadel, supposedly a beacon of prosperity and unification between all species of the galaxy. Your target is Commander Shepard. After rising through the ranks of the Systems Alliance, Shepard was granted access to the elite Spectre taskforce. Maintaining a visage of Humanity’s beloved success story, Shepard has secretly taken the role of premium assassin to the Citadel Council. He spends his spare time sowing chaos among the stars by scaremongering about a vague alien threat. Show this Commander what a real reaper looks like…

With its lush views and overabundance of snooty inhabitants, Mass Effect’s Citadel is one of the best locations we could ever yearn to performing comical murders in. As a member of a secretive elite group, Shepard makes an ideal target for our barcoded killer. We’re already dreaming of takedowns involving a favorite store on the Citadel, a scuffle with a reporter holding an unexpectedly explosive microphone, and an unfortunate swap from a regular Asari consort to an Ardat-Yakshi. If all else fails, the classic bag of bricks dropped from above offers an ample opportunity for a Mass-Effect-named challenge assassination. Newton strikes again!

According to the city’s elder priest of Arkay, Solitude “has a long history of madness and murder.” Sounds like just the place for a certain assassin we know to slip into for a spot of macabre mischief. Solitude’s royal court is a mess, with steward Falk Firebeard pulling the strings despite the recently widowed Elisif sitting on the throne. The entire court is ripe with elusive targets for 47 to tackle.

With shadowy organizations like the Dark Brotherhood and Thieves Guild bringing the bubbling political pot to the boil, 47 is spoilt for choice regarding factions to blame for any untoward deaths. And given the high, mountainside walls smattered throughout the fortress, there are bound to be more than a few of those. Bonus points, of course, if you take out your prey with an appropriately placed arrow to the knee.

Where would you like to see Agent 47 practice his fiber wire skills? Share your chosen video game worlds for Hitman in the comments section below.