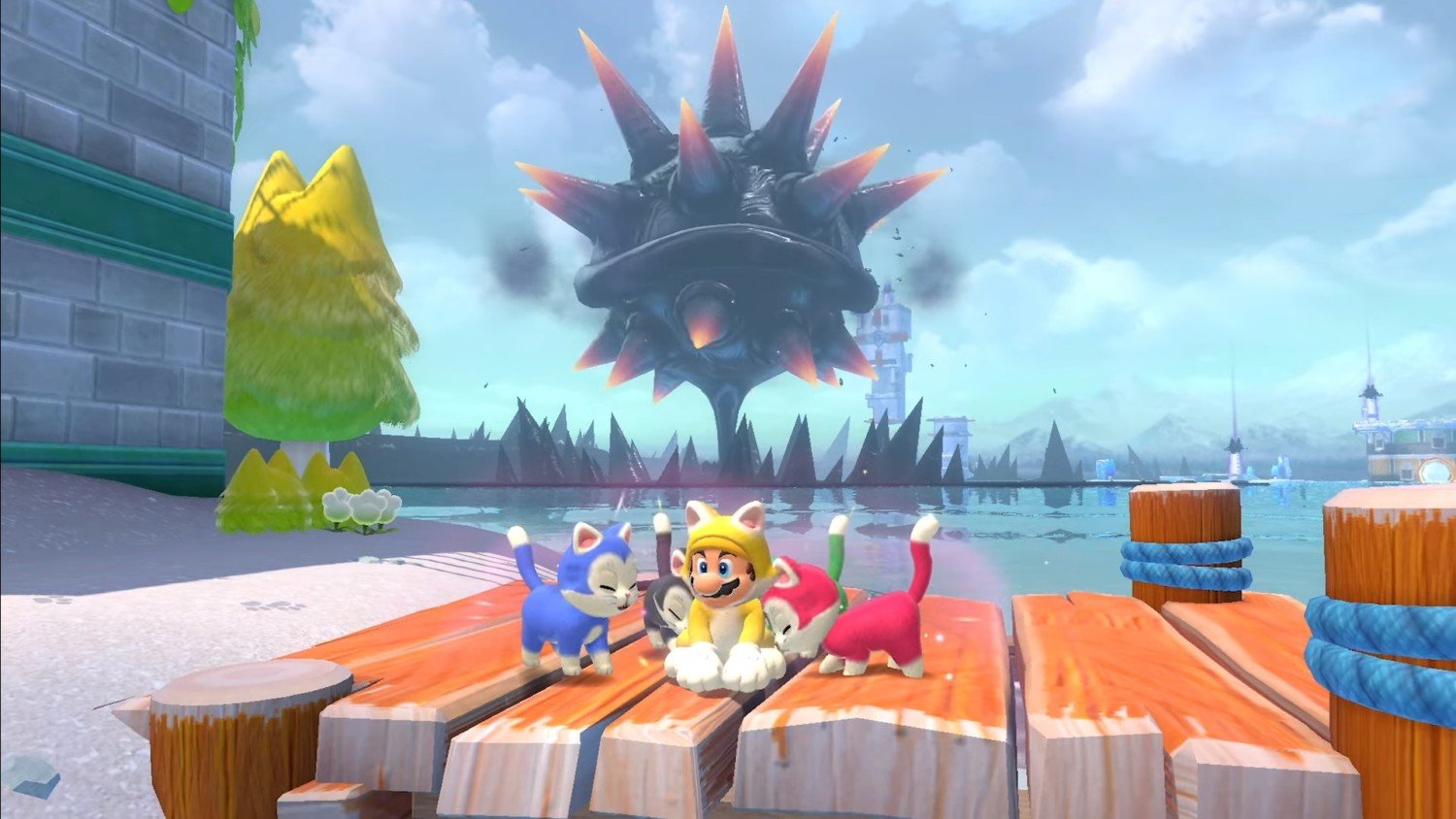 Super Mario 3D World + Bowser's Fury brings back one of the best 3D outings for the plucky plumber with an extra adventure tacked on. While it introduces one game to a new generation of Mario lovers who forwent the Wii U, it also has a small taste of where the next Mario game might go in Bowser's Fury. Here are the best features from both sides of this old and new double-bill that keep the champion of platforming feeling fresh.

In Bowser's Fury you rehash a bit of Mario Sunshine after being asked to save pops by Bowser Jr and his magic paintbrush. However this time around instead of going up against the mini menace you team up and work together to rid the world of insidious inky substances. You can have a second player play as Bowser Jr in co-op, but in single-player he acts as a pretty cool difficulty adjustment slider, and you can tell him just how much ass to kick by your side. If you just want him along for the ride you can ask for that, too, but being able to tell Bowser Jr how much violence to wake up with is both innovative and quite funny.

On top of Bowser Jr. offering a chance for two-player action (and Super Mario 3D World's existing four-player chaos) a new addition to this version of the game is co-op Toad levels. The spin-off Captain Toad game is even more fun with a side-gunner along for the ride, controlling where to look in the level and clearing the way of pesky enemies. But Super Mario 3D World's Toad levels go one step further in putting four Toads in at once, making things even more madcap than his mad mushroom cap. We salute you and your wingtoads.

Mario Odyssey continued Galaxy 2's evolution of the concept of a Mario level into gigantic sandboxes full of challenges and secrets to uncover. This evolution is even more marked in Super Mario 3D World + Bowser's Fury where, in the remastered original, you'll drop in and out of levels through a world map but then in Bowser's Fury you're unleashed on one big lake of fun. However even within the lake there are individual levels made with the same curation and charm of a classic Mario challenge, brimming with mechanics and ideas that never outstay their welcome.

Return of the dive

If there's one thing to make you feel the decades between classic Mario and newer 3D games it's the lack of bits of Mario's ever-growing toolkit. The main missing ingredient after playing Odyssey is the unlimited movement options Cappy grants you. Obviously Nintendo won't edit a sentient hat into all their previous games, but Super Mario 3D World does feel a little less clunky thanks to the retroactive addition of the dive roll. Being able to roll out of a jump (ground pound then hit Y) adds a tiny extra boost of directional control, not quite as much as the doubled-up Cappy dive from Odyssey but enough to make going back through 3D World like slipping into a nice, warm, familiar bath.

Speaking of submerging ourselves in bodies of water, the undisputed king of aquatic levels returns! In Bowser's Fury, Lake Lapcat is a formidably large place for a swim but after your first showdown with the big brute, our familiar friend Plessie returns to act as your faithful steed. The amazing thing about Plessie (other than the speed and heights you can reach) is that no matter when you might need a ride, Plessie is there. It's genuinely impressive, no need to whistle or call or text, it's almost as if Plessie reads your mind and when you pan the camera over to the shore there it is, waiting to whisk you to the next adventure.