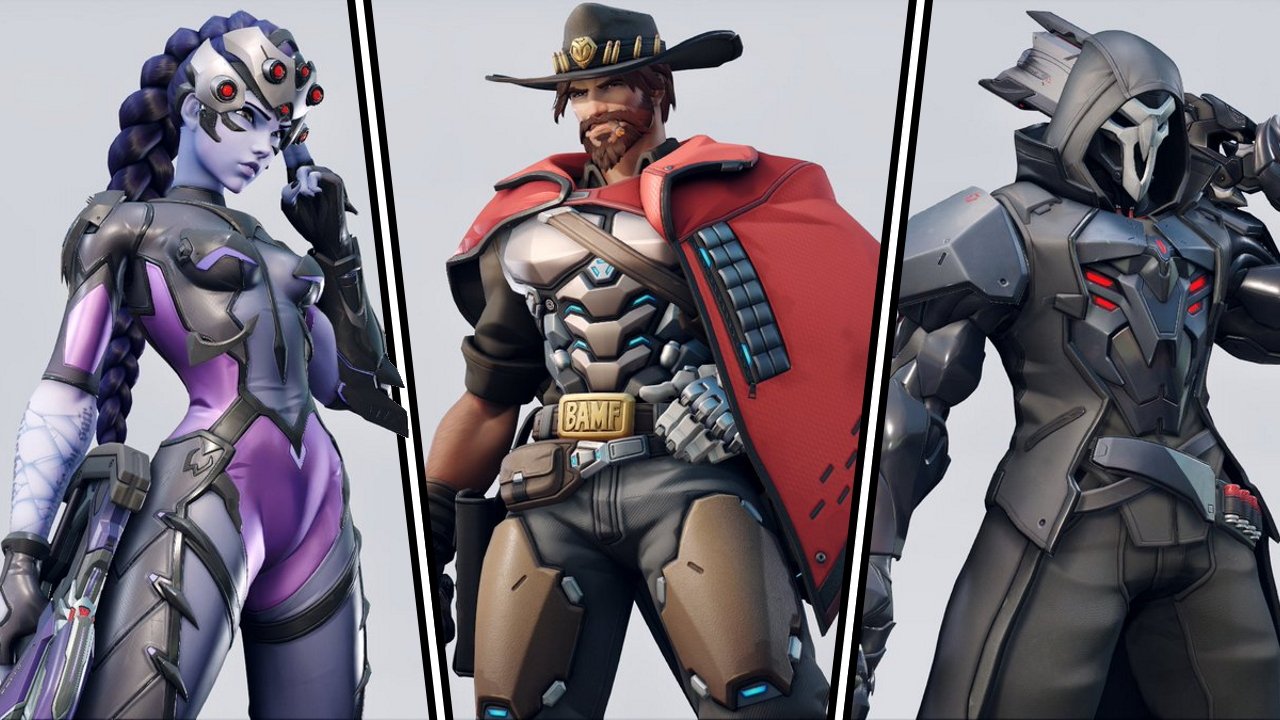 The Queen isn’t dead but her successor is already eyeing the throne. Overwatch may still sustain a dedicated playerbase but Blizzard’s showcase for the sequel at BlizzCon 2021 demonstrates that they have big plans to win players over. If you’re excited to learn more about what’s new, we've rounded up the biggest changes for Overwatch 2 revealed so far.

The biggest changes for Overwatch 2

After hearing almost nothing since Overwatch 2’s 2019 reveal, the cavalry is finally here. Starting at Blizzcon Online, major details about Overwatch 2 are being dropped by Blizzard for fans to devour. Overwatch 2 is bringing additional Heroes, new maps, fresh mechanics, and, most exciting of all, an entirely new co-op mission system. Here’s everything we know about Overwatch 2 so far.

5v5 is the new standard for PvP

The days of 6v6 matches are coming to a close. Overwatch 2 has decided that online battlefields are juuust a little too cluttered right now, so the total player count will be dropped by two. As with most other shooters, Overwatch 2 will have five players per team.

According to the Overwatch blog post detailing the change, standard PvP modes will feature one Tank, two Damage, and two Support heroes. As Overwatch's current least-popular class, it makes sense that Tanks are the ones to take the hit.

This adjustment won’t affect the number of Tank available to play as, but it is part of a wider rethinking of the class. Game Director Aaron Keller noted in a recent developer livestream that Tank powers can be “noisy” or “cause problems” when stacked together. Alone, however, their powers still form a valuable part of the game. There's more on the changes to the Tank role further down the page.

Canadian Hero Sojourn got a brief tease in the original Overwatch 2 reveal but we’ve now had a chance to see her in action. Intended to hark bark to classic arena shooters, Sojourn's weapon can fire full auto as a machine gun or charge up pinpoint blasts with its railgun. Here's a quick look at it in action:

The secondary railgun fire deals hefty damage and is capable of eliminating low-health characters in a couple of well-placed shots. Sojourn will play into the hands of anyone with precise aim in the midst of heavy battle. Her other abilities remain a mystery but you can expect her to make use of the powered up arm and leg boosters she’s sporting.

Throughout BlizzConline, the Overwatch Twitter account also gave us a look at the redesigned models for several different classic heroes. Widowmaker, Reaper, McCree, and Pharah are all sporting metallic new designs, looking like they stopped by Tony Stark’s workshop for a tune up before arriving in Overwatch 2. Also, McCree’s beard and moustache have certainly been spruced up for the new title. Good work there, cowboy.

A new PvP mode debuting in Overwatch 2 is Push. The name might be easy to mix up with Payload, but it's quite different in practice. Rather than a single cart, both sides are fighting to encourage a big friendly robot named T.W.O. to push a red barricade along the opponent's side of the map. Standing near the robot will wake it up and push your team's wall further, but lose control and and he'll lope his way back to the opponent's side

Your wall stays where it is when left alone, making each round a competition to push just that little bit further than your opposition before the time limit runs out. Push far enough to reach a checkpoint and you'll unlock a forward spawn point for your side.Of course, a complete domination will win the game if one side manages to push all the way to the end of the track.

It’s a no brainer that Overwatch 2 will include new maps but BlizzCon 2021 still made their reveal pretty exciting. Two new iconic locations we'll be heading to are Rome and New York. The former mixes famous landmarks with modern constructions, while the latter sees skyscrapers and a metro line tower above as players fight between pizza stores and shops at ground level.

We've also been shown a few clips of a frosty cityscape for Toronto (a new push map), and the vibrant colors of Rio's streets and beach. Perhaps most exciting of all, we have Monte Carlo. In this luxuriously wealthy region, the rich come to watch the height of AI competition. The cart you'll be pushing here is no ordinary payload -- it's a futuristic, AI-driven take on the Formula 1 cars that make the city famous today. Finally, we've also had a brief glimpse of the Gothenburg and India maps, though details on both are scarce. The former includes Torbjörn's workshop, with all the equipment scaled down to his size.

Race toward the Monte Carlo finish line in Overwatch 2.

Along with a campaign, Overwatch 2 is pumping up its PvE component with new cooperative Hero Missions. Set on the game’s multiplayer maps, Hero Missions will see new areas and paths explored as players battle through a variety of Null Sector enemies to secure different objectives. Payloads may take alternate paths, fresh areas could open up, and even new weather systems can appear over the course of a mission.

So what will we be doing on Hero Missions? Quite a lot, it would seem. In the behind the scenes footage we saw players recovering canisters across maps, guiding payloads, and defending platforms from horde-like waves. Blizzard says they’re aiming to have hundreds of variants available to keep things fresh. Each mission will feature light story elements depending on who you take into the fray. Primarily, however, they’re intended as a replayable multiplayer component to enjoy alongside the standard PvP.

To complement the expanded co-op side of the game, an all-new Hero progression skill tree appears in Overwatch 2. By playing through the campaign and Hero Missions, players can unlock upgrades and talents in three different trees for each Hero. Talent points can be earned through missions, then spent to tailor their favorite Heroes to different styles of play. Along with direct upgrades, these also restructure key abilities entirely in exciting ways. So far we’ve seen seven tiers of abilities split into three different paths for each Hero.

Those new Null Sector enemies we mentioned earlier? They’re far more than simple robo-grunts with guns (though there are a lot of guns). The Overwatch gang will have to square off against several new types of foe, not all of which will be directly attacking them. The Breacher is a bomb-carrying bipedal mech which targets nearby objects with an aim to detonate upon it. It won’t attack players, instead walking towards objectives before unleashing a massive blast. The smaller Slicers will look pretty familiar to any Horizon Zero Dawn players out there. Exploding from the environment in swarms, these raptor-like foes zip around quickly, making them tough to target.. The long-haired Puller is capable of locking players in with a tractor beam and pulling them through the air before impaling them.

PvP is the bread and butter of the original Overwatch. Most of Blizzcon 2021 discussed co-op and story elements for the sequel but competitive multiplayer has a lot coming too, and a full developer PvP livestream has given us a breakdown of what to expect.

The Overwatch team has been experimenting with new systems such as class passives which benefit all characters under the umbrella. Tanks, for example, could get knockback protection as well as reducing the Ultimate gain for opponents shooting at them. Damage dealers could receive a buff to movement speed, while supports and healers passively regenerate health. None of this is set in stone right now but it could fundamentally change team structures for the sequel.

The Tank class in particular is being looked at for a rework. In the behind the scenes video Overwatch director Jeff Kaplan said that the team wants tanks to be “toe-to-toe brawlers” rather than protective health sponges. As such, characters like Reinhardt are being given more aggressive toolsets to make them more threatening on the field.

It’s worth noting that the specific changes noted during BlizzCon 2021 are far from fixed. The Overwatch team is still experimenting with each class so we could see plenty of further iterations before the game’s full release.

So… Is there a release date?

Unfortunately no, not just yet. Activision doesn’t think it’s likely to release in 2021, so there’s a while yet before we’ll get to dance with Sojourn and any other new characters Overwatch 2 plans to include. For now, you'll just have to settle for enjoying the full behind the scenes video for Overwatch 2 below.

And those are all the new changes we know of coming to Overwatch 2! Expect far more information to drop over the course of the year as we come closer to its eventual release date. Are you most excited for the new maps, heroes, or other changes? Share your thoughts in the comments down below.