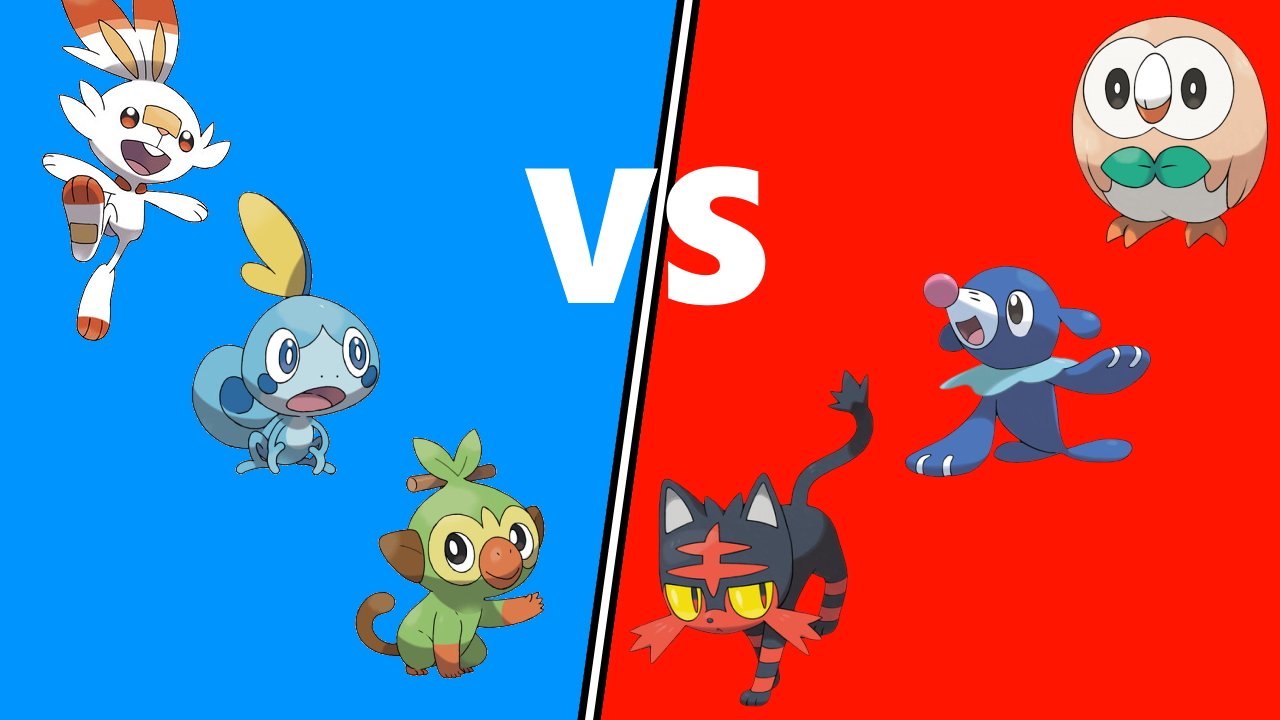 All Pokemon starters, ranked by generation

It’s about time we let you in on a secret: Pokemon, isn’t really our jam. Sure, we grew up with Ash and Red respectively hogging our TV and GameBoy screens. But it wasn’t long before the allure of other video game worlds saw us stray from the road to Viridian City. Does that make us the worst choice for ranking every starter? Probably. That's too bad though, because it’s the series’ 25th anniversary and we’re doing it anyway! Look at this way, you’re getting an objective view – one based entirely on looks. No time to grab those pitchforks because we’re already off!

Every Pokemon starter, ranked by generation

Just look at this sorry lot. Sword and Shield had their fair share of problems but we reckon it all started with this lackluster group of living balloons. Gone are the angular, animalistic designs of starters past, supplanted instead with “cute” blob heads above vaguely humanoid bodies.

You can almost smell how easily they translate into outrageously priced bobblehead merchandise, soon to stuff the shelves of Pokemon Centres worldwide. We'll make one concession, and it's that Grookey has some excellent evolutions. Sobble’s design, however, has us questioning whether anyone at the Pokemon Company has even seen a newt before.

Do you know what’s worse than a monkey throwing poop at you? A monkey flinging dung that’s on fire. Yet here we are with Chimchar, a simian sporting a scorched rear. The official artwork even has him reaching back there like he knows exactly what’s about to happen when the camera’s switched off. Have some class, Pokemon.

Turtwig is sweet enough, but his evolutions look like someone ran out of ideas and hastily slapped Blastoise and Venusaur together. And last of all, Piplup. You can ride the cute penguin train all you want, buddy, but it’s clear that this is where starter designs started to go downhill – just look at that indistinct, rounded dome. Next, please!

We are absolutely team Tepig. From this snoutish starter all the way up to the chunky Emboar is a quality chain of porky Pokemon. A glance to the side, however, and, oh dear. Snivy probably has the most punchably smug face in Pokemon. The final evolution of Serperior has earned the right to lord it over others. But as a weedy starter, Snivy has no place giving side eye at such an angle.

We’re pretty sure Oshawott was intended as some kind of otter before, presumably, someone dropped it in a bucket of clown makeup. Things don't get better down the evolution line, either. Samurott doesn’t even make consistent sense as its final stage, suddenly flipping from an ovoid cartoon into a ferocious, mustachioed menace.

Okay, now we’re starting to kick up a gear. Fennekin may suffer a little from Giant Head Syndrome but this is a decent batch overall. We’re big fans of the little fox’s gigantic ears, which remain a throughpoint in both its evolutions. Froakie is quite clearly a frog (take note here, Sobble) and evolves into one of the most popular water types out there in Greninja.

Chespin falls into the generic shape issues of other starters but we’re more than willing to let that pass to get an entire pokemon series around the humble chestnut. Middle child Quilladin is possibly one of the funniest designs in the series, looking like the unholy lovechild of Gengar, Pinnochio, and Avatar: The Last Airbender’s Aang.

Generation 3’s Treecko gets right everything that Snivy and Sobble don’t. This classy little lizard is well defined and has a clear style to him. Crucially, he’s also entirely distinct from his fellow starters. Mudkip is a bit too soft at the edges for our tastes, but its determined expression is like the world’s smallest-yet-yappiest dogs. No matter how tiny it may be, Mudkip is confident it could take on a Gyarados. We respect that.

Finally, we come to Torchic. The sheer brazenness of a chicken Pokemon lighting itself on fire is something we can get behind. When the squat critter even looks like a digestible nugget, we have absoultely no idea how this species survived in the wilds of Hoenn. Good for you, Torchic, just steer clear of any ketchup until you've evolved.

What a breath of fresh air Gen 7 was. Popplio got a lot of hate when Pokemon Sun & Moon released because the internet (quite rightly) has no respect for circus clowns. But while that smiling seal deserved more love than it got, it’s the twin stars of Litten and Rowlet that really seal the Generation’s lofty spot.

A sardonic kitten was never going to disappoint, and for once we were blessed with an evolution that went somewhere other than fire/fighting. Moving across, a picture of Rowlet ought to be placed under the dictionary definition of "birb". The bow tie is a beautiful touch and while he does go through a smarmy teenage phase as Dartrix, he eventually spreads his wings into the glorious Decidueye, who wouldn’t look out of place in Assassin’s Creed.

Crocs and alligators are famously terrifying in both nature documentaries and our recurring nightmares. Totodile is therefore a trailblazer for being one of the most adorable toothy chompers we’ve ever seen. Sure, we’d never let his massive mouth and million glistening teeth anywhere near our bite-sized Pokepals, but with such pure energy, his jaws are firmly clamped on our heart.

Cyndaquil too, offers a unique design and element combo you wouldn’t expect, making it all the more memorable. Chikorita is by far the weakest and weirdest of the squad – seriously, what’s up with its head? –  but we’ve got to admire Nintendo’s commitment to simply scaling up this bizarre dino-horse Grass type with each evolution.

Sneaking in to deliver a crafty jolt up the competition’s backside, it’s everybody’s favorite Poke-mascot, Pikachu. The world’s most recognizable rodent (eat it, Mickey) is a brilliant companion in Pokemon Yellow and one of the first critters to let us dream of a permanent adventuring pal by our sides. There’s not much more to say here, as whether he’s rocking a more modern, sleek look or his rotund retro roots, we love Pikachu in all his forms.

We couldn’t end things anywhere other than the OGs; these are the best of the best. Charmander and his evolutions may have stolen the limelight but it’s hard to deny that this was a golden collection all round. Charmander lives up the first half of his name, and Squirtle’s shell-spinning exploits led to the TV show’s glorious squirtle squad. Even the grass-type starter – so often maligned in later games – delivered us a bulbous beauty unafraid to evolve in monstrous directions.

In the game that started it all, your choice of starter was a defining moment. The fact that arguments still take place today over which Pokemon Red and Blue pick was the premium choice demonstrates the unforgettable quality of these three minute monsters.

Ready to start shouting at us yet? You can find the perfect space to do so in the comments section below. Just please don’t mention TMs because we genuinely don’t know what they are.