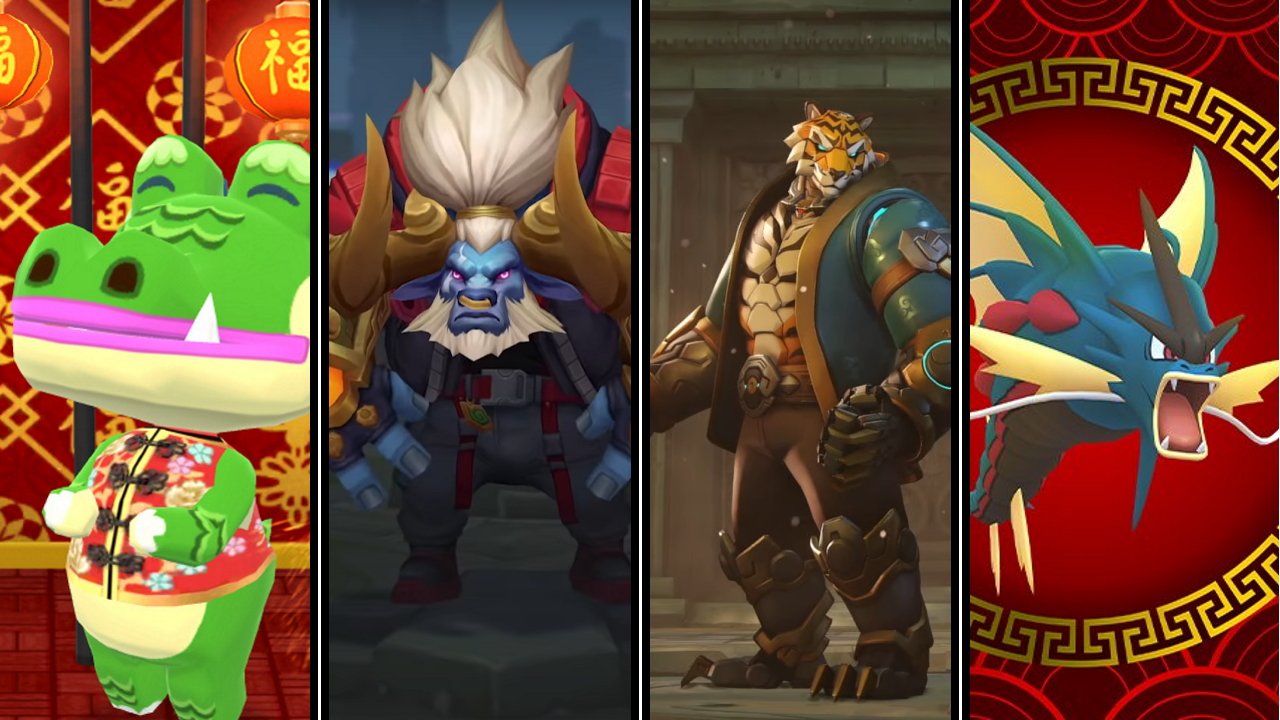 If you’ve been feeling bullish lately then you’re only getting into the spirit of things! The Year of the Ox is fast approaching and video games are celebrating the Lunar New Year in style with gold and red events to bring joy to our online worlds. Want to know where you can take part? We’ve rounded up all the major video game Lunar New Year events below so you can get straight to celebrating!

Situated very close to Festivale, Lunar New Year is a quieter affair on the Animal Crossing: New Horizons calendar. On the day itself you’ll receive a message from Isabelle and a new letter from your in-game mum. Walk around town and you can also enjoy some special dialogue with your villager. In addition, from February 10 - 17 you’ll find the Korean New Year Gift, Chinese New Year Gifts, and Chinese New Year Decorations available in the Nook Shopping Seasonal Goods section.

The Lunar New Year Wall & Floor Collection has already returned to Pocket Camp, running from February 4 - 18. For the duration, players can craft special gold-and-red decorations such as the Paper-Lantern Wall using Leaf Tickets. In addition, each day you log in will reward a Lunar New Year Gift item to decorate your camp. Head to the store and you’ll find a whole bunch of clothing and items to craft as well.

Never one to miss an opportunity for a party, Fall Guys is celebrating the Lunar New Year with a gifted outfit for all players. Buy and/or play the game before February 13 and you'll find the Monkey King skin added to your inventory for free. Also appearing in the store this week is the Simian Royalty outfit. You can grab the bottom and top halves of that outfit for five Crowns each on the in-game store.

Genshin Impact brings major festivities to Liyue during the Lunar New Year thanks to the Lantern Rite festival. Make your way to Liyue Harbor and get involved with the tradition to score a generous sum of 1,600 Primogems, a four-star Liyue character, and more. You're supposed to help citizens prepare their lanterns for the event but you might find yourself distracted by the many games and activities taking place around the city. Don't forget to check out the new Theater Mechanicus tower defence game while you're in the area!

To celebrate a fresh year, the Lunar Beast event sees the return of the ridiculous All Random Ultra Rapid Fire (ARURF) mode along with a host of stylish new skins. Fiora, Darius, Aphelios, Jarvan IV, Annie, and Viego all have new looks, as well as mr Ox himself, Alistar. There’s also a Lunar Beast Event Pass featuring icons, emotes, ward skins, chromas and more. The Lunar Beast event runs from February 4 until March 8.

Blizzard’s hero shooter has gone all-in for the Lunar New Year, featuring new modes, skins, and more for the Year of the Ox. Kkachi Echo, Dragonfire Bastion, Bull Demon Orisa, and Tiger Huntress Ashe are the stars of the skin lineup this time, though all the previous years’ offerings are also available to collect. Jumping online will let you take part in weekly challenges to unlock the Terracotta Medic skin for Baptiste, Xiake Mcree skin, and Imperial Guard skin for Reaper. In addition, you can also take part in the Bounty Hunter, Capture the Flag, and Capture the Flag Blitz modes. The Overwatch Lunar New Year event runs February 4 - 25.

Pokemon Go’s Lunar New Year party is now well underway, taking place from February 9 - 14. Red Pokemon have their appearance rates boosted for the duration, and a red Shiny Gyarados can be found out in the wild. Lunar New Year Research Tasks are also available, requiring players to catch certain types of Pokemon and give plentiful Gifts to their friends. Put the work in and you’ll get encounters with creatures like Charizard, Magikarp, Miltank, and Tauros. Finally, thanks to the Lunar New year you can also Mega Evolve Gyarados for the first time! Full details on special Raids and Pokemon are available here.

The Lunar Festival offers the chance for Horde and Alliance to honor their ancestors. By visiting ghostly Elders across the land, players can give their respects to earn some reputation and a Coin of Ancestry. That latter reward can then be spent on purchasing Lunar New Year items and outfits from vendors in the Moonglade region. It isn’t all cheer and celebration, however. The insidious Omen stirs within Lake Elune’ara at this time of year, requiring heroes to band together and take down the demigod. The World of Warcraft Lunar Festival runs February 5 - 19. Anyone with an active and purchased 6-month subscription during the event will unlock the Lucky Yun mount in celebration of the Year of the Ox.

And finally, PC gamers would do well to check out the Steam Lunar New Year sale. Expected to start on February 11 and run until February 15, it'll bring discounts on a bunch of games and open up Lunar New Year items in the Points Shop. It's a short sequence of discounts, but be sure to take a look in case any games you or your friends have been after get a discount. There's no better time to grant a gift, after all!

Those are all the best video game Lunar New Year events we’ve seen so far! If we spot any others taking place then we’ll do our best to update the list with more details. Want more to look forward to? We’ve also got a list of Valentine’s Day events if you’re after a spot of virtual romance in the new year.