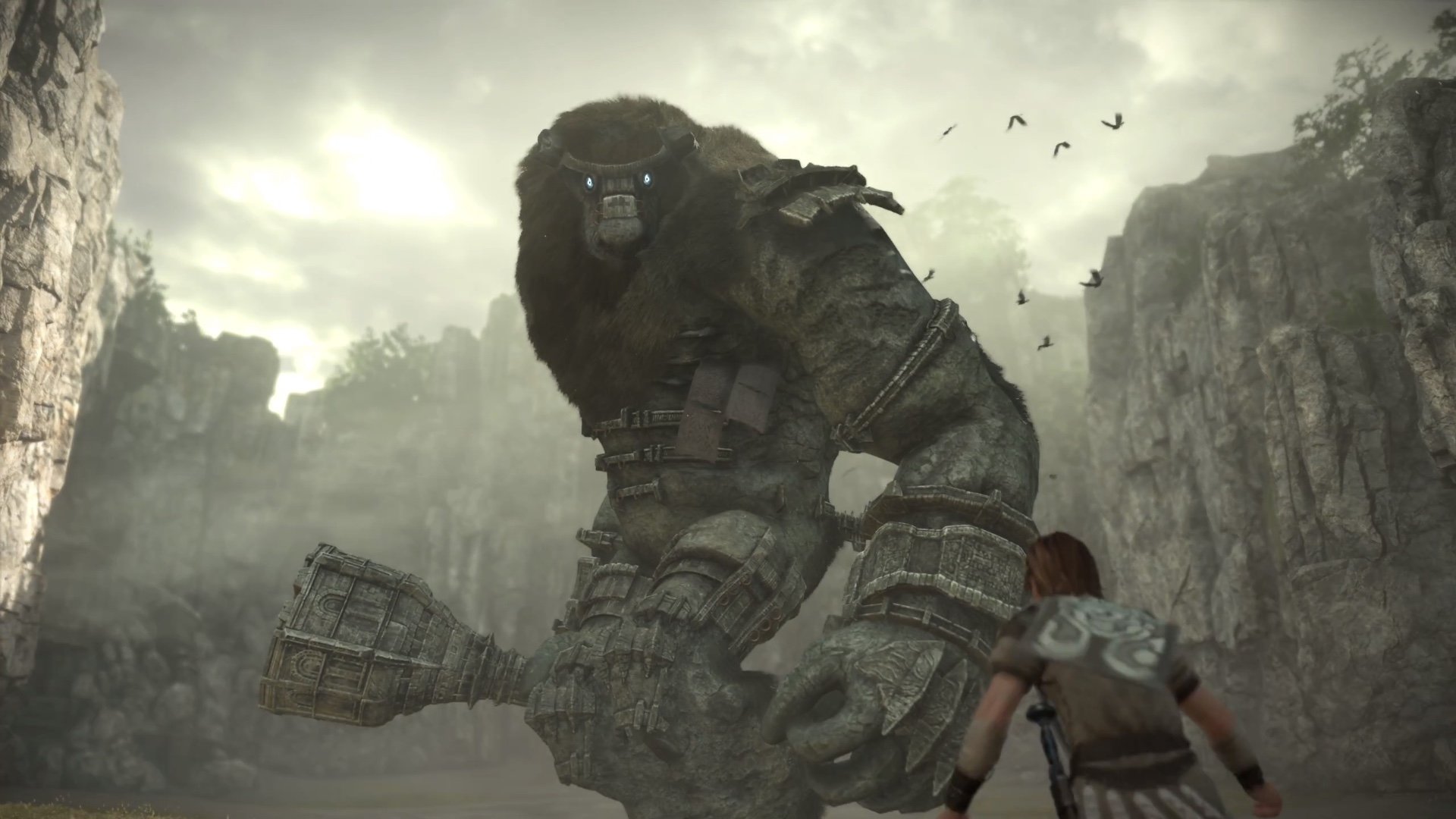 Shadow of the Colossus HD review

Shadow of the Colossus is one of those games that sends grown men and women into flights of wistful reverie. Originally released in 2005, it's a simple game about taking down 16 giant enemies spread around a vast and lonely forbidden world, but the execution of that concept is so deft and haunting that it lives long in the memory.

For many people it was an almost perfect game, with one big caveat: it ran like a dog on the original PlayStation 2 hardware. The game was an emotional piledriver, but Sony's Emotion Engine was ill-equipped to handle it, and the action often sank into single-digit frame-rates as you struggled to gain the advantage against enormous and elegant adversaries.

Such is everyone's lingering affection for the game that it has already been the subject of one remastering for PS3 in a bundle with its spiritual sibling Ico, but this latest re-release is a much grander remake. Developed by Bluepoint, the talented American studio behind a number of HD collections, Shadow of the Colossus HD aims to elevate the game to a truly modern standard, even overhauling the visuals to support 1440p at 30fps or 1080p 60fps display options on PS4 Pro. But how does Shadow feel to play in this more luxurious finery, and does it stand the test of time?

Shadow of the Colossus begins with the sort of narrative minimalism we've come to expect from creator Fumito Ueda. A boy on a horse crosses a bridge into a forbidden land and enters a shrine. He is carrying a girl, who we learn was the victim of ritual sacrifice, and lays her body on a stone bed at the heart of the structure. He then speaks to a force in the heavens, which calls itself Dormin, and it tells him it may be able to resurrect his beloved if he slays the 16 creatures represented by stone statues along the walls of the shrine. With a mystical sword and his horse Agro, the boy sets out on his mission.

In keeping with Ico and Ueda's later work, The Last Guardian, Shadow of the Colossus offers very little in terms of story development from then on, preferring to let you draw your own conclusions. The boy crosses beautiful fields, dunes, rivers, forests and mountains, but this forbidden land also feels bleak and abandoned. Away from the shrine, he occasionally encounters the crumbling remains of castles and cities, but never sees another soul, nor many animals besides a few birds and fish.

Using his sword, the boy can pinpoint the location of the next colossus by following the reflected light of the sun, and it's these enormous guardians of the land, who are often dormant until he approaches, that give the game its haunting quality. They tower over the player and give chase slowly and persistently, so your first task is usually to figure out where their weak points may lie and how you can possibly reach them. It's in these moments of contemplation, as the mournful orchestral soundtrack fills the air between you, that you also have to consider what you're doing and what these creatures represent. What purpose do they serve? Are they even alive? Are we right to kill them?

Each colossus is more of a puzzle to solve than an enemy to fight. The first is a literal giant that tries to stomp you, and in order to reach its vitals you have to bring it to its knees and clamber on. Shadow's control scheme is built around grabbing things by holding the right trigger, at which point a strength meter in the bottom-right of the screen gradually depletes. In this case you grab the giant's body hair and haul yourself across its vast legs and torso, using flat protected areas like a stone belt to let go and recover your strength.

Eventually you reach its head and discover a glowing symbol, into which you can plunge your sword to take chunks out of a health bar. Eventually the giant falls, stumbling to the ground in slow motion as the music soars, where its dead body is enshrouded by blackness that then punctures your body, leaving you similarly lifeless. You wake up back at the shrine with a black human shape standing over you. The more colossi you defeat, the more shapes meet your return. Dormin then sends you on your way to find another colossus.

While several of your foes are also bipedal giants, Shadow eventually assembles quite a menagerie of adversaries. Other archetypes include vast flying sentinels who must be provoked or grounded in order to join them in the skies, and aquatic or subterranean predators that have to be coaxed into exposing their vulnerabilities. Some of the most memorable involve deception, using the environment or harnessing the colossi's strength against them to gain the upper hand. Every battle is a symphony of awe and lateral thinking.

Shadow of the Colossus is also famous for its incredible ending, which we won't spoil for new players. After many hours fighting to understand and overcome these majestic opponents, often questioning your motives in the process, the payoff is quite something. When we started playing we had asked ourselves: will Shadow of the Colossus still feel like a masterpiece 13 years later? The answer is a resounding yes.

On the shoulders of giants

But what about Bluepoint's HD update? It won't take hours of gameplay to figure this one out, because it's abundantly obvious from the first cutscene onwards that the US studio has delivered a conversion every bit as masterful as the source material.

In your mind's eye, you probably remember Shadow of the Colossus as beautiful and intricate. Mountain ranges rest watchfully under gorgeous skyboxes, as Agro charges across fields of grass that shimmer in the wind and catch the sweep of the sun's rays through passing clouds. Blues, greens and purples dance through the water as it flows over falls, and foams and roars miles below as you cross tendrilous bridges towards the forests and shadowy caves beyond. Boot and hoofprints pock the sand in your wake as you puzzle out your destination, and eventually colossi drag themselves to their feet - imposing fusions of rippling muscle, fur and stone - shattering the ground beneath them as they walk to you.

Load up the PS2 version today and the sad truth is that you added all that detail in your head. It looks great for a PS2 game, but the detail isn't there, and the draw distance comes at the expense of stability. Fighting colossi is as much about fighting the camera and the performance as the enemy itself. Playing on a vanilla PS4, Shadow of the Colossus HD starts to resemble your rose-tinted version though. It's clear Bluepoint has rebuilt these assets from scratch, and the result is a game that feels modern, rather than a revival. The frame-rate is fixed at 30, the world feels rich and alive, while improvements to light and shaders accentuate the atmosphere of solitude.

Beauty and the beasts

Load it up on PS4 Pro, however, and Shadow of the Colossus HD is another game entirely. It's still quite easy to get lost by following the sword reflections alone, and backtracking or diverting is frustrating because Agro is a rather temperamental companion, but if you take your time then this side of the game can be almost meditative, the moreso now Bluepoint has filled each vista with unprecedented depth. The camera is constantly pulling back to reveal more of the landscape, and the developers have clearly crawled over every inch of it like an archaeologist with a toothbrush brushing away dirt and imperfections. The addition of a Photo Mode is very welcome.

The choice to favor performance or visuals is there, and we ended up preferring 60fps at 1080p. 1440p is wonderful, but that extra smoothness as you tour the world and take on your foes has the edge for us. In a world of soaring elegance, those extra frames felt like a missing piece of the aesthetic, finally where they should be.

Bluepoint also throws in some new control schemes, and it's probably a testament to them that we didn't realise they were new until deep in the game. There's only one section where they create a little old-versus-new confusion - a fight where you have to pick up an object, which is now accomplished with the grab button rather than the jettisoned 'action' button - but we figured that one out pretty quickly. The old controls are available if you want them.

Over a decade after Shadow of the Colossus felt like a game out on its own, miles ahead of its time, Bluepoint's HD remake now feels like the definitive version. Shadow always felt like a masterpiece compromised by hardware limitations, and Bluepoint has not only removed those obstacles, but improved on the original vision by giving it an artistic overhaul that perfectly channels the spirit of the source material. Whether you are a devotee of Ueda's games looking forward to being reunited or a new player excited to experience this slice of gaming history for the first time, Shadow of the Colossus HD is the game you wanted.