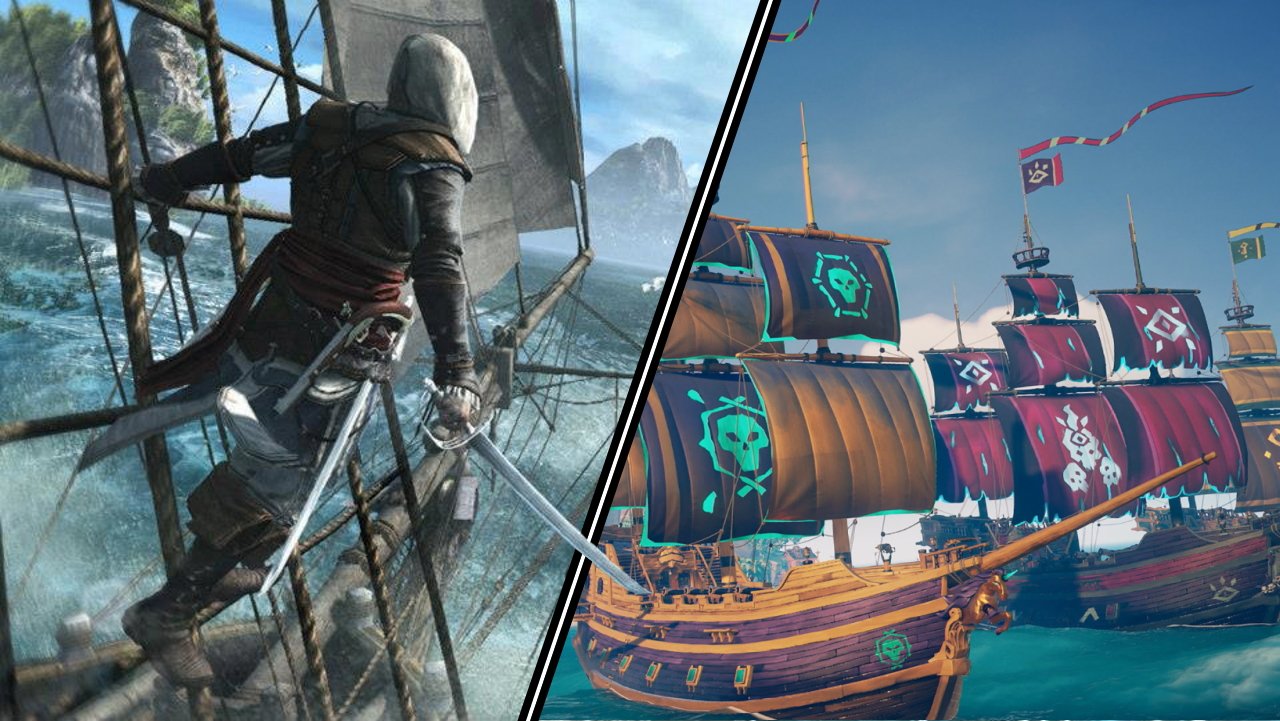 With the mainsail hoisted and the port behind us, our voyage is well and truly underway. There’s only one thing missing: a fine tune to belt out at the top of your salty aired lungs. Sea Shanties underwent a phenomenal revival recently thanks to TikTok and we’ve struggled to fill our ears with anything else since. Pirates and whalers might not be the stars of the show in the current gaming age, but that doesn’t mean our favorite hobby has left us high and dry when it comes to nautical ditties. If you’re desperate to weigh anchor in a virtual world, we’ve rounded up the best video game sea shanties to sing along to below. All you’ll need next is a crew!

If any title was going to serve up opportunities aplenty to sing along with a motley band, it was always going to be Rare’s rapscallion adventure. Sea of Thieves includes a plethora of instruments to jam along on with your crew, but knowing the words to put to each tune is another matter. Thankfully the official Sea of Thieves Twitter account has stepped up to the plank and delivered lyrics and voiced editions of several excellent tracks like We Shall Sail Together and Becalmed.

We Shall Sail Together: https://t.co/ahwIep9cuh

The full playlist is available on Spotify here if you’re looking to practice before you get your real sea legs or, er, sea voice. You’ll probably want to download the lyric sheets from the Twitter thread above if you’re hoping to lead your band through a rousing rendition while taking down the kraken, however. Looking for some inspiration? Check out this group of shanty singers who’ve already graced the game’s seas with their voices.

Viking longboats may be the Assassin’s Creed series’ vessel of choice these days, but it wasn’t always so. Back in 2013, Black Flag saw our stealthy stabber set out across the seas as a pirate, presumably in search of a better life and lungs. What could have made for tedious periods of inaction on the waves proved instead to be the highlight of the game. Protagonist Edward Kenway’s crew belted out catchy and emotional songs for the player to join in with on each voyage, leaving players longing to return to the waves. If you’re looking for join in with the singing, the lyrics are available on the Assassin’s Creed fandom wiki.

Odyssey may have shifted scenery to the sunny isles of the mediterranean, but Black Flag’s shanties proved too popular to forget. The game’s Male and female crews offered a fantastic range of shanties to enjoy, though you might need to practice a little greek if you’re hoping to join in.

Much of Dishonored’s shady knife work took place in the filthy back alleys of Dunwall. But the impact of the world’s brutal whaling industry is felt throughout both the original game and its sequel. This particularly unsettling adaptation of Drunken Sailor therefore made a fitting companion to Dishonored’s debut gameplay trailer. Gone are japes like throwing your inebriated pal in bed with the captain’s daughter, replaced instead with less savory ideas like feeding him to the hungry rats for dinner or slicing his throat with a rusty cleaver. Classy as always, Dunwall. Spotify users can find the song at the tail end of the game’s official soundtrack.

Yes, really. Old-school PC gamers may just about remember bobbing along to a cheery tune near the waters of RuneScape’s Port Sarim. If you’ve saved up enough money for a VR headset in epochs that have passed since, you can now enjoy Runescape’s Sea Shanty 2 inside rhythm game Beat Saber. The custom track was put together by SamZippo, and is available to download here. There are no official lyrics to the shanty, but feel free to make them up with as many curse words as you like while struggling through the expert difficulty version.

Know of any other brilliant video game sea shanties? Share them with us in the comments sections below so we can all enjoy smooth sailing in the months ahead.