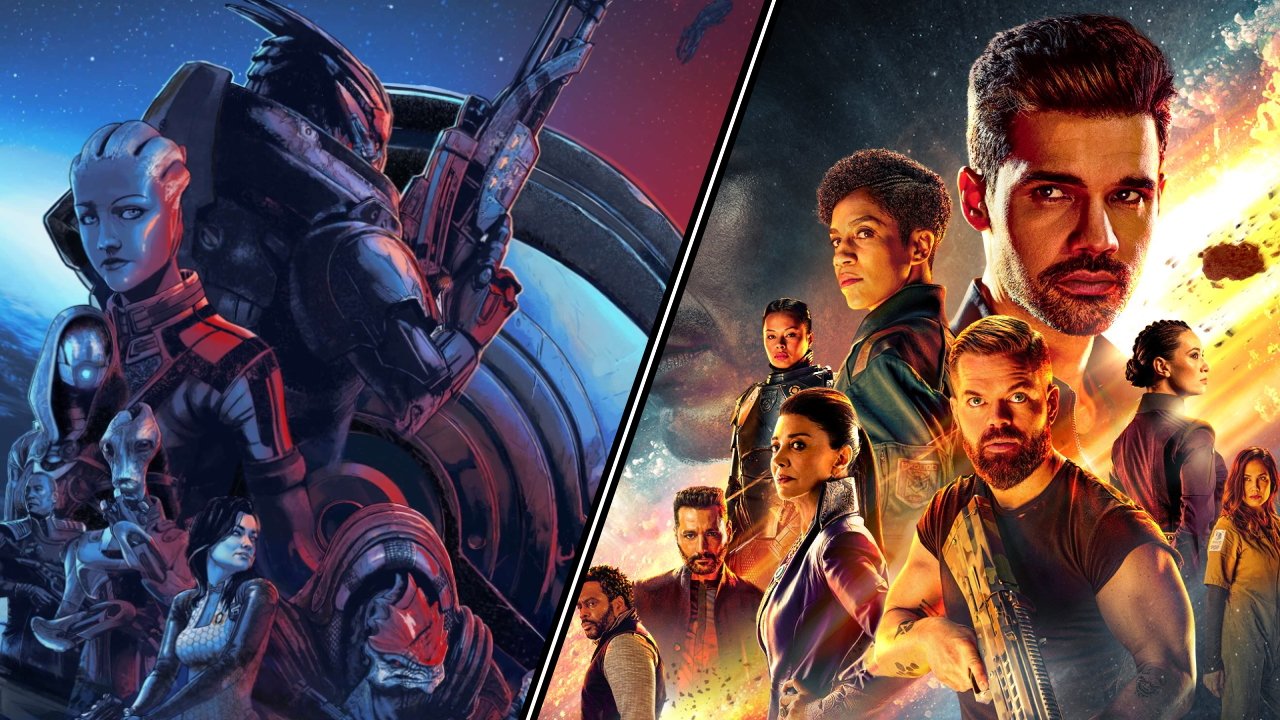 It’s kind of insulting how cool space is. A gigantic vacuum which does its best to make sustaining life as outrageously challenging as possible? It should be awful, terrifying even. And yet, we seem to be obsessed with the idea of heading up there. Whether it’s to expand humanities reach, find another habitable world, or simply to make a quiet life among the stars, the pull of that void is an alluring one.

As such, we’ve been finding ourselves watching an awful lot of The Expanse recently. The fifth season is currently airing on Amazon, and the conclusion of each episode has left us aching to explore its worlds (and the space between them) for ourselves. While there’s no official tie-in that’ll let us get punched by Amos just yet, we’ve rounded up a haul of video games like The Expanse below that’ll help fill the gap until that next hour airs.

Mars in the Expanse is an inspiring thing; an entire society devoted to a singular, unified goal: transforming a barren red rock into a living, breathing world. That change doesn’t come fast, however, which means generations will come and go, most never getting the chance to see the fruits of their labor. Fortunately, while centuries will certainly pass in Terraforming Mars, you’ll be there to oversee your corporation’s journey through all of them.

By funding research products, you and rival firms (your mates or the AI) will slowly raise the temperature and oxygen of the planet, carving out lakes and cultivating plantlife to raise your terraforming rating and claim victory. This is an engine building game at heart, but there’s an impressive number of corporations and project cards to explore. As a result, each planet-shaping run makes for a uniquely satisfying experience.

Released in 2016, Terraforming Mars is one of the most highly regarded board games on anyone’s tables. Unfortunately, it’s also one of the ugliest. The good news for those of us in the digital realm is that the Steam adaptation masks the physical box’s dreadful budget art with some slick animations and sound effects that deliver a distinctly cool aura.

The game design here is so smart that you’ll barely have a turn go by in Terraforming Mars in which you or one of your friends doesn’t perform an incredibly cool sequence of actions. So if you’re looking for the ideal game to chat over while progressing the dream that is Mars, support the MCRN by enlisting in the terraforming project with your pals.

Where you can get it: On Steam for PC or the iOS/Google Play stores for mobile devices.

Despite its reveal trailer holding the ignoble title of most disliked gaming video on YouTube, Infinite Warfare boasts one of the more interesting Call of Duty campaigns – especially for sci-fi fans. While modern titles are busy rewriting contentious aspects of the past, Infinite Warfare looked forward instead, to a tense standoff between the separated factions of the aging Earth and rigidly militaristic Mars. Sounding familiar yet?

Of course, political tensions can only take you so far in a shooter. This being Call of Duty, it isn’t long before you’re thrown through bombastic action sequences brimming with explosions and overly iditioc AI goons. Kit Harrington’s over-egged antagonist certainly can’t hold a candle to Bobbie in our Mars-loving hearts, but there’s still plenty to enjoy for fans of the setting, especially if you've already wrapped up Titanfall 2.

Instead of remaining firmly squatted behind knee-high walls, Infinite Warfare dares to consider how gunfights might play out in zero-g. It’s not much, but in CoD terms? That’s a shockingly bold step. Infinite Warfare largely slipped under the radar in the series’ yearly releases, making your weekly wait the perfect time to zip through its star-studded storyline.

Where you can get it: On Steam for PC or on PS4 and Xbox One.

Political machinations and protomolecule gunk aside, half the idea behind The Expanse’s universe is chuntering around in a spaceship and trying to scrape out a living. Few games will capture the value of your metallic star coffin better than Elite Dangerous. Start with little more than a floating box, you’ll need to forge your own path through the nebulous commercial future. With enough hard graft, you'll work your way up to a professional mining or mercenary business spanning countless systems.

The story of Elite Dangerous has provided plenty of otherworldly mystery. The alien Thargoids may be better understood now, but the first appearance of their spiralling, petal-shaped ships sent shivers through the game’s community. Shutting down players out of the blue to scan them, it begged the question as to the larger agenda the mysterious beings had.

Stick on a VR headset and Elite will bring you as close to the dark emptiness of the interstellar void as humanly possible. Or at least until SpaceX starts offering tourist trips to the cosmos. It’s also a fantastic time to jump into Elite, as the Odyssey expansion is set to release this year. The second major add-on will finally allow players to hop outside the cockpit. Whether you choose to explore unknown worlds or frequent the social hubs and bars with your friends is entirely up to you. If Star Citizen ever gets a full release it could snag this spot, but you could be waiting until 2030 at this rate.

Where you can get it: Steam for PC, or on PS4 and Xbox One.

And finally, if you're looking for a living entire universe to sink your time into, BioWare’s Mass Effect series remains one of the finest action-RPG storylines to grace the galaxies of our hard drives. Humanity is far from the dominant force in these stars, but their expeditious rise forms a key point of contention among the many-headed (and limbed) council of star-faring species.

As the first appointed human to the Spectre special force program, you’ll need to assemble a team and prove your place in their ranks. Step one is hunting down Saren, another Spectre who has unexpectedly gone rogue. While the overall story is engaging, the real joy to each Mass Effect game is in forging relationships with the members of your crew. By the time you reach the third game’s conclusion, there are few virtual characters you’ll feel closer to than the Normandy's inhabitants. Naomi Nagata may be absent, but with Garrus and Tali aboard you’re in quality company nonetheless.

Recently, Mass Effect: Legendary Edition was unveiled, promising a full remaster of all three core games (sorry Andromeda). While you could wait for that to arrive in the first half of this year, an early return to this classic sci-fi series could help you appreciate just how much advancement the Legendary Edition offers when we see more of it in action.

Where you can get it: Origin on PC, or attempt the PS3 and Xbox 360 versions.

And that completes our list of games like The Expanse to keep you busy with each weeklong wait for a new episode! Get out there and explore the stars, or take a shuttle to the comments section below to let us know which game you’re using for some interstellar escapism.