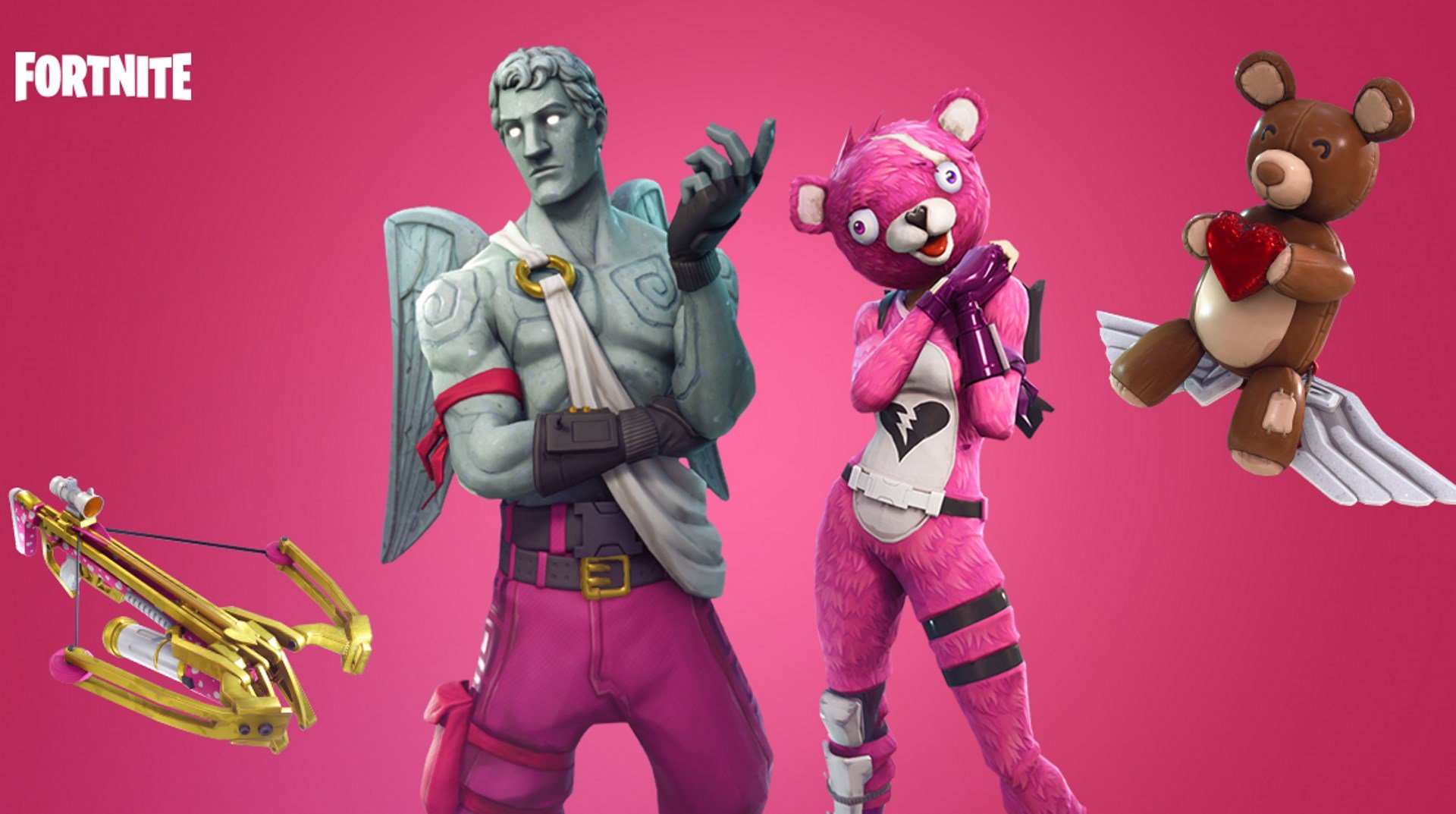 For experienced Battle Royale players, setting yourself ridiculous challenges is all the rage right now. It’s hard to find a Fortnite YouTuber who isn’t attempting nonsensical tests like the rainbow gun challenge. While we approve of making your own fun in games, we can’t help but feel these tasks are lacking a little something to really make them special.

Fortunately, Fortnite’s Valentine’s Day update is on the way, bringing with it a new crossbow weapon and a trove of love-themed cosmetics. To celebrate the occasion we’ve created a series of Valentine’s-inspired challenges to test your skills with in-game. Love truly is a battlefield.

We’ll start off with the most obvious and simple option. Whenever a new weapon is added to the game, the first challenge on everyone’s mind is completing a game using it alone. With most guns that might not seem like a big deal, but add a crossbow to the game and we’re all ears. Just how deadly Fortnite’s crossbow is remains to be seen, but we’re already looking forward to seeing people silently snipe the last kill with a bolt from a bush.

This challenge is for duos mode only so you’ll need a friend or, better yet, your one true love, to take part. From the Battle Bus, you and your partner must drop to opposite ends of the map, ideally to two cities, split across the East and West (we recommend Pleasant Park and Retail Row, or Greasy Grove and Lonely Lodge). Born into separate, warring families, you and your forbidden love must travel the lengths of the map to unite in the middle.

Should one of you fall during the journey, the other is honor-bound to find the spot of their demise and ceremoniously kill themself. Even if their body is lost to the storm, you must weather the elements to die by their side — because nothing can hurt you so much as being without your love. If you successfully meet, the two of you, utterly smitten, must never leave each other’s side, straying no more than a few metres even when shot at or if one of you is downed.

N.B. - this mode works best if role-played, with each player loudly professing their love for the other and (repeatedly & incorrectly) asking the other “wherefore art thou?” every few seconds for a locational update.

N.B.B - The eastern player must be Juliet.

Possibly the hardest challenge on this list, Cupid is all about helping love bloom on the battlefield. Using whatever weapon you see fit, your task here is to shoot at two different players while hidden, tricking them into fighting each other instead of you. Bonus points if you can do so from within a bush right next to one of the two. The best part of this strategy is that you can be sure the victorious lover will make their way over to loot their beloved, giving you an easy opportunity to gun them down them in turn. Isn’t love beautiful? For obvious reasons, a silenced weapon will serve you best here.

The crossbow understandably stole the show when it was announced, but it wasn’t the only noteworthy addition. Hiding among the lovey-dovey cosmetics, Epic Games also thought it suitable to unleash this monstrosity on our unprepared eyes:

Truly a skin to set your own skin crawling. If you’re lucky (read: insane) enough to have afforded this getup, then we have the perfect task for you. For Crazy in love, you’ll need to don your terror teddy, and select a victim as you drop into the map. Your purpose here is not to win, but to haunt your poor prey instead, taking the role of a crazed stalker from a horror movie we certainly don’t want to watch.

With a target in mind, follow them from a distance, poking your bear head around corners so that you’re just about visible from a distance, always watching them. Make sure your target catches glimpses of you, but never stray close enough to put yourself in danger. If they come after you, flee and hide, preferably without being seen. No weapons allowed here, but feel free to grab some bandages, shields and a smoke grenade for an especially spooky vanishing act. Watch as your prey devolves further and further into paranoia and insanity while pursued by an unblinking pink bear from the abyss. If your love is killed, the curse transfers to their killer, and the stalking begins anew. We recommend heading to Wailing Woods, Lonely Lodge or Moisty Mire for the environmental thematic bonus.

In the unlikely scenario that you and your target survive to the last two players in the game, run directly at your mark to embrace them with love. Sure, they’ll probably kill you, but from their viewpoint they’re basically the last standing survivor of a B-Movie horror flick. They deserve it.

Love’s not a competition, but I’m winning

One for squads or duos, the aim of this challenge is to prove yourself as the most loving member of your team. Any important loot you discover (shields or weapons of rank blue and up) must be gifted to your nearest ally as a sign of your devotion. You must graciously accept and use any gifts given by your team to show how appreciative you are.

Your team is still aiming to win the game, but being as thoughtful a teammate as you are, your job is to ensure your team has the most fun possible. As such, try not to land the downing/killing blow on any opponent, giving the kill to your partners where possible. At the end of the game, the player with the most kills and highly ranked weapons is the least loving member of the group and should be summarily shunned by the rest of the group.